The Case of the Poisoned Pigeon 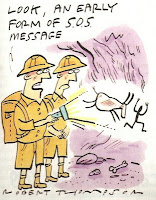 Tonight Eddie Mair recalls the S.O.S. messages that BBC radio used to broadcast for 70 years in the Radio 4 programme And Now an Urgent S.O.S, Message.

In his memoirs This is London veteran announcer Stuart Hibberd recounted the “rules” for the messages:

For some years we have offered the public a free broadcasting S.O.S. service which was greatly appreciated and widely used. At first there was some misunderstanding about the rules, and we used to get requests to put out S.O.S.s for lost cats, dogs, parrots and canaries, being regarded as a kind of inquiry agency for any lost individual or animal. We had therefore to make it quite clear that we could only accept an S.O.S. for a near relative of a sick person if he or she were dangerously ill, and this had to be confirmed by the doctor in charge of the case or the hospital authorities concerned.


And in 1947 he recalled this particular message:

Early in July I broadcast a most unusual S.O.S. about some poisoned pigeons, which ran as follows:
“Three dead pigeons were picked up in Barnet this morning, and it was found, on examination, that they had been poisoned by cyanide. It is known that a fourth pigeon was picked up by a man who said he was going to eat if for his dinner. Scotland Yard warns this man not to eat the pigeon and wants him to telephone Whitehall 1212.”
I never heard whether he got the message in time or not.

Interesting post, I enjoyed the broadcast too. Interesting how they referred to the events of 7/7 and 20/7 when the mobile networks were not available to use by the general public.

And how they said those sort of events are a good case for retaining radio broadcasts as a source of emergency information...

Seems to support my case I made out in a guest post here:
http://andywalmsley.blogspot.fr/2012/04/killing-off-of-ceefax-is-bad-idea.html

ILR stations, or at least Capital, seem to have done something similar in the 1980s, going by a message Alan Freeman reads out in a 1985 recording I have. Clearly a better way of reaching younger people at risk/in trouble at the time.