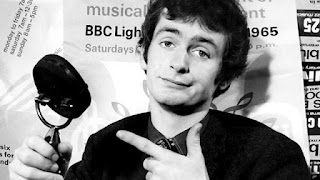 Cuddly Ken is all over the BBC this week as the drama Best Possible Taste: The Kenny Everett Story airs on BBC4 on Wednesday evening.

As well as the biopic we get the first ever repeat of a Top of the Pops show from 11 October 1973 which, I think I’m right in saying, is the only Kenny Everett fronted edition that hasn’t been wiped.

Meanwhile Radio 4 Extra yesterday repeated Kenny Everett – Here’s Kenny and will also be broadcasting some of the Captain Kremmen sci-fi comedy episodes throughout the week. Next Saturday we also get another repeat of Kenny Everett: The BBC Local Radio Years.

Meanwhile how about this programme from the Radio 1 series Radio Radio first broadcast in 1986. Here Kenny talks about his early influences and his career.


Still can’t get enough Ken? Then try this website which includes his shows on Radio London, Capital and Radio Victory.
Posted by Andy Walmsley at 18:00

A clever talent no doubt but I will never forgive him for his pro-Tory "Let's bomb Russia" nonsense at a 1980s Tory conference...