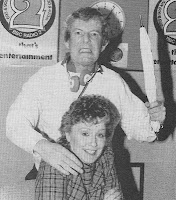 News that former national newspaper editor and broadcaster Derek Jameson has died was issued yesterday.
Wogan's television years can often be overlooked in recalling the Radio 2 Breakfast Shows of the past but its Derek Jameson who had the second longest tenure (so far) in the morning hot seat for the five years between 1986 and 1991.
In the wake of the Week Ending libel case the BBC offered work to Derek on Radio 4’s The Colour Supplement and, in late 1985, deputising for a holidaying Jimmy Young.  Such was his success on that show that Radio 2 Head of Music Frances Line hired him to host the Breakfast Show, displacing Ken Bruce. His Fleet Street background forced a change of style, topical items and interviews, that stayed with the show during both Derek and then Brian Hayes’s run.
Here’s the start of that first show in April 1986. Derek would be joined on the show by “weather girl” and former station continuity announcer Vivien Stuart (pictured with Derek above):

From January 1992 Derek moved to weekday evenings to present music and chat on The Jamesons alongside his wife Ellen, perhaps the best known husband and wife radio pairing since Jean and Cliff. This show also ran for five years.
Here are Derek and Ellen kicking things off in 1992:
<
Derek Jameson 1929-2012
Posted by Andy Walmsley at 02:41

Ah yes, Crystal Gayle doing "Why Have You Left The One You Left Me For?" An old Radio 2 classic, back when the station was a total parallel universe that represented the recent past by playing what was popular on American country and easy listening radio in 1979, rather than (as it tends to now) what was actually popular here at that time.

I was convinced that we had everything Crystal Gayle ever recorded in our active repertoire around that time. She was never off!