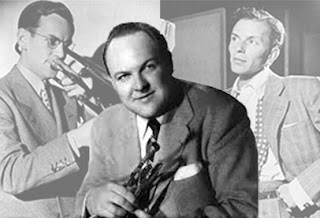 Billy May - he of the Big Fat Brass - was born 100 years ago this month.  Best known for his work with Frank Sinatra and his theme for the Naked City tv series, Billy was one of the elite of American arrangers and composers in the big band idiom.

My copy of George Simon's The Big Bands provides this potted biography:

Billy May never had a band until well after the Big Band Era had gone. But the happy-sounding, highly danceable and almost always swinging outfit, which this former Charlie Barnett and Glen Miller arranger headed, became one of the few remaining joys for those of us who in the fifties were looking for good, new, big band sounds. May, a huge man with a dry wit that was reflected in much of what he wrote, featured slyly slurping saxes, voiced in thirds, which gave his music its distinctive style. Later he wrote mainly for others (made some great side with Sinatra), was musical director of many TV shows and of Time-Life's Swing Era recreation series.

I was first introduced to Billy May through listening to Alan Dell's Big Band Sounds shows.  So who better to interview Billy than Alan when he was visiting the UK in early 1991. The Radio Times billing for this programme reads: "During his recent visit to London, Billy May spoke to Alan Dell about his career. He recalls his early days as a trumpet player and arranger with the top American bands of the 40s, and his musical arrangements, that provided definitive settings of America's most popular songs, for Frank Sinatra".

This is an edited version of that interview that was broadcast on BBC Radio 2 on 1 April 1991.


Eight years earlier Billy May had again been on a visit to the UK, this time to conduct the BBC Radio Orchestra in a concert from the Royal Festival Hall. Alan Dell compered the show that featured some fine musicians such as Kenny Baker, Danny Moss, Henry MacKenzie, Roy Williams and Barry Forgie. The guest singer was Tony Christie. This live concert was broadcast on BBC Radio 2 on 2 April 1983.


Billy May died in January 2004 but his music lives on. In this centenary year he was remembered in last Sunday's Clare Teal show on Radio 2.