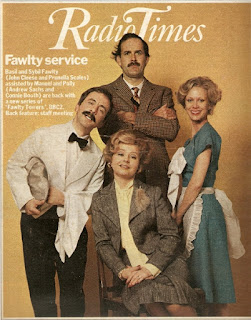 Although Andrew had a considerably lengthy television career spanning just over fifty years there was an even greater body of work on the stage and on radio. In this post I review his radio career.

Andrew's first professional acting engagement was in 1947 in a repertory theatre production at Bexhill-on-Sea of Ronald Millar's Frieda.  For most of the 1950s he was in rep and then in the West End in a number of  Whitehall farces (he appeared in a number of BBC televised Brian Rix farces 1958-62 and 1967-69).  Andrew also joined the BBC Drama Repertory Company, his audition report reading: " Very much like the voice, remarkable range as accents, direction, good voice control, very versatile, nice to see such a range, vitality, would be useful to have but his real resting place is with variety and features."   Initially he was cast in a number of minor roles in dozens of plays and Saturday Night Theatre productions as well as the 1957 radiophonic soundscape Private Dreams and Public Nightmares where Andrew played one of the ethereal voices alongside Frederick Treves and Joan Sanderson (decades later making a guest appearance as the hard-of-hearing Mrs Richards in an episode of Fawlty Towers).

Private Dreams and Public Nightmares was first heard on the BBC Third Programme on 7 October 1957.


German-born Sachs was an obvious choice to act out some of the scenes in the Network Three adult learning series Talking German and Improve Your German (1959-63). Occasionally he broadcast for the BBC's German Service. Meanwhile he continued to make almost weekly appearances for the BBC Drama Repertory Company in plays and serials on the Home, Light and Third, more often than not some way down the billing, though he did co-star with John Baddeley in the Afternoon Theatre comedy Slightly Off Key and with Barbara Leigh-Hunt in My Dearest Angel. He also appeared in, and for a while directed, episodes of the daily serial The Dales. 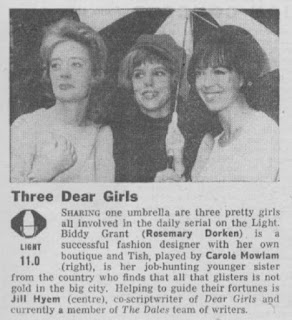 In 1962 Andrew started to write for radio. His first broadcast piece was One Man and his Dog, heard on the BBC Home Service. In 1964 he followed that with the black comedy Till Death Do Us Join in which Lance Percival's character Mr Ernest Wire is intent of bumping off his wife. Other productions that some year were Fearful Adversaries about a 'down-at-heel Soho busker' played by Sachs himself and Flat to Let for Midweek Theatre. The following year he co-wrote with Jill Hyem a daily serial broadcast over a month called Dear Girls about a group "who come to London to find their fortune but had to share a house in Belsize Park." The cast of Dear Girls included Melody Lang, who Andrew had married in 1960. Dear Girls was the forerunner to Waggoner's Walk as four years later Jill Hyem, now writing with Alan Downer, continued with the idea of a group characters in a bedsit in Belsize Park in the Saturday Night-Theatre play The Ropewalk, this in turn became the long-running Radio 2 daily serial.  Andrew himself appeared in a number of editions of Waggoner's Walk.

Other plays written by Andrew include Afternoon Theatre productions Pie and Pea Supper (1966),   Decline and Fall of the Empire (1969), Made in Heaven with Timothy West and future Fawlty Towers co-star Prunella Scales (1971), Home from Home starring Martin Jarvis (1972) and Cash Me a Portrait (1972). For Midweek Theatre there was Philately Will Get You Nowhere (1971) which has had a number of repeats. In 1985 he wrote The Art Lovers trilogy.

But perhaps Andrew's best-known original work is The Revenge, to date radio's only play without words. Recorded on location in binaural stereo it's a thriller telling the story of a man on the run. First heard on BBC Radio 3 on 1 June 1978 it gained a swift repeat a month later, twice in the same evening.

The original broadcast was preceded by a discussion with producer Glyn Dearman, head of drama Ronald Mason and Andrew Sachs. In this version you'll also hear Andrew talking to Peter Reed about the play taken from the Radio 7/4 Extra programme I Did It MyWay.


Andrew was appearing on stage in No Sex Please, We're British in early 1975 when John Cleese and BBC producer John Howard Davies came to see a performance. Impressed by what they saw they offered him the part of Manuel in the sitcom that Cleese and Connie Booth were in the middle of writing. No doubt they recognised how well Andrew played farce, an element that would feature throughout Fawlty Towers. The rest, as they say, is history.

During the 1970s and 80s Andrew continued to work regularly on radio. He was a superb narrator and reader, what he termed "sitting down acting", cropping up on A Book at Bedtime, Story Time, Poetry Please! and Time for Verse. Now a star name he was a panellist on The Law Game, The Name's the Game, Give Us a Conch and others and was in the comedy shows Delve Special, Sloe Coaches, Week Ending, Going for Broke and Little Blighty on the Down. In 1987 he was also back helping listeners to learn a new language, this time Spanish in When in Spain, working on the premise that Manuel would step in and prompt Andrew on what to say. 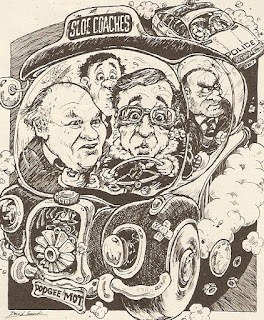 In this the first episode of Sloe Coaches Andrew Sachs plays the part of Gerhardt "a former Luftwaffe pilot who crash-landed his Heinkel and has been trying to repair it ever since". In the starring role is Roy Kinnear playing the scheming boss of a ramshackle Sussex coach company. Gerhardt is one of his drivers. The Radio 2 series was written by Charlie Adams and John  Lea. There was only one series of Sloe Coaches. It's not hard to see why.


Following in the footsteps of Alec Guinness and Kenneth More, Andrew took on the role of G.K. Chesterton's Father Brown in a couple of series heard on Radio 4 between 1984 and 1986. On playing Father Brown he told the Radio Times "I've always thought of him as essentially English and I never think of myself as a very English actor, nor indeed a very English person. But he's a lovely man to play and, on radio, the stories stand on the style of the writing. The adapter, John Scotney, has caught Chesterton's style beautifully -and that's not easy when you have only dialogue to rely on."

This is the first story from the second series of the Father Brown Stories titled The Perishing of the Pendragons.


In the early nineties Andrew would become a familiar voice to a whole new younger generation reading the daily stories in Wiggly Park on Radio 5. Here's an example of his story-telling.


Andrew was also cast in another Radio 5 children's serial The Adventures of Tintin as Snowy but by now the majority of his radio work was as a reader on Poetry Please! and With Great Pleasure. There was also a reading of the French comic masterpiece Clochemerle and a role in the '"rock 'n' roll sitcom" Love 40 - New Balls Please, both on Radio 2. Over on Radio 4 he was in the comedy series Man of Soup (1999) and Dirk Gently's Holistic Detective Agency (2007). His last starring role on radio was as Dr John Watson opposite Clive Merriman's Holmes in The Further Adventures of Sherlock Holmes (2002-04 & 2010).

In 2002 Andrew was featured on the Radio 4 series That Reminds Me in which actors and comedians reminisced about their life and career in front of a live audience.

Fascinating. I'd not realised what a varied radio career Andrew had enjoyed.