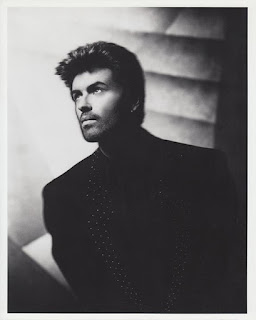 It was the kind of shock ending to Christmas Day that you'd expect from one of the soaps. But this news was real enough. As I sit drafting this post at 2 am on Boxing Day listening to the hits of George Michael, currently playing back-to-back on Heart, I fear my words cannot do justice to his music and career. But oh, what a voice.

So instead let's hear George talking about himself and performing in concert twenty years ago. The interview, conducted by Chris Evans, was part of the warm-up for a concert recorded in October 1996 in the Radio Theatre at Broadcasting House. He touches on smoking, the Sony lawsuit, sexuality and the reasons he wants to get back on stage.


This programme, An Audience with George Michael, was first heard on BBC Radio 1 on 8 December 1996. My tape started partway through the interview so I've tidied it up a little. And if anyone has the first 30 or so minutes please contact me.

I was working in Broadcasting House that day, and some of my engineering colleagues, oldish cynical men (like me) were involved in setting up the live session.

Unlike many of the other artists who came in for a test, his performance stopped them dead in their tracks, all of them pausing to listen to him.

He had a very obvious talent which shone through.