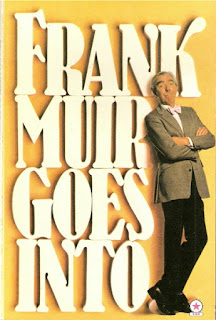 This year's pick from the festive comedy selection box is a 1980 edition of Frank Muir Goes Into...

This programme was first broadcast on BBC Radio 4 on 24 December 1980.


Frank Muir recounts how the series came about: "It all began when BBC Radio 4, seeking to find ways to make use of the mass of recorded material in their archives, asked me to do a Christmas programme for children tracing the development of radio comedy since the war. This went out in 1971 under the title Why Are You Laughing? It was produced by a couple of likely lads named David Hatch and Simon Brett, who spent hours in listening rooms hearing playbacks of the Golden Oldies of radio, and comedy LPs made by the likes of Woody Allen, Michael Bentine and Stanley Baxter. A group of actors played 'live' sketches and told the sort of jokes which needed to be told as illustrations.

It became clear that the formula, the 'mix' of the show, was unusual and had more potential than being merely a way of re-broadcasting archive material. So the BBC decided to have a go at a series. It was called Frank Muir Goes Into... because each week we took a theme, e.g. Home, Sport, Jobs, and took a look at the humour which these subjects attracted.

We needed a kind of general-purpose joke-teller and actor and Alfred is a little more than these. He happens to know every old joke (old jokes are vitally important) and can tell them as well as anybody but he is also a fine straight actor, a sensitive reader of poetry and is possessed of an unbelievable range of dialects and accents".