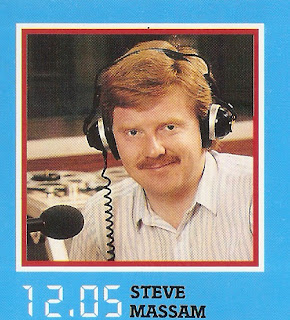 So Steve Massam is packing it in, hanging up his headphones after 33 years. He now gets his Sundays back.

Admittedly those outside the Radio Humberside area may not know the name but Steve has been part of the station line-up since 1983 - as far as I'm aware the only DJ from that decade still broadcasting from the Queen's Gardens studios.

Steve had a daily show on Humberside for the best part of two decades. Initially a mid-afternoon show called Let's Go - this was still the era when all local radio programmes had to have a title - he moved to lunchtimes in February 1986.

Longer running still is his Sunday morning request show, again starting in late 1983 under the title Sunday Spin where, it seems, he had a little help from Postman Pat! Eventually this was renamed Steve Massam's Sunday Requests and which, though the run times have changed a little of the years, has aired every week and concludes with Steve's last show on 18 December.

For my audio contribution I must express a degree of self-interest. At the time of this recording, 24 May 1998, Steve's Sunday show included a live pub quiz. Taking part were the Jolly Miller, Wrawby and The Gardeners Arms, Coniston. Somewhere in the background at Jollies is Val and myself helping with our quiz knowledge. Back then we lived over on the north bank in Beverley but my good mate Simon, who at the time just happened to live next door to the pub, invited us over. My recollection, until I played back this recording, is that we lost. In fact we won. How could I doubt that!

Well, well... that brings back memories! No idea what became of Gail Fryer have you Andy? She and I (•ahem•) used to do the Saturday morning slot on BBC RH back in the day. (Trans: I was invited in a few times to read 'Tufty' road safety stories live on air!) https://soundcloud.com/dotterel/tufty-club-story

Dear Tim,
my name is Michael Short and have met a wonderful lady called Gail Fryer. My father-in -law is resident at Vida Hall Care Home. Also resident is Gail, who has told me about her time on radio and previously working with a chemical company and work overseas.

Would you like further information? Should I let Gail know?