Down Your Local - BBC Radio Sheffield

BBC Radio Sheffield was the second of the experimental local stations to open in 1967 just one day short of the anniversary some 44 years earlier of the opening of the Sheffield relay 6FL on 16 November 1923.

The station's first manager was the former Home Service producer and presenter based in Manchester Michael Barton who'd played a part in the early 60s closed-circuit tests in Hull. His deputy was Tim Neale who would replace him as manager when he moved on in 1972. Michael went on to become the Controller, Local Radio. You can hear him talking about his career in this edition of Radio Moments:Conversations.

In this short sequence you'll hear Jack Thompson opening the station with an ident using the sound of Sheffield cutlery created by David Cain of the BBC Radiophonic Workshop, a link-up with Radio 4's Today programme presented by Jack de Manio, Ted Gorton with listener Dorothy Revell and her son Derek, another radiophonic piece, this time a news theme composed by John Baker, Michael Cooke and finally Tony Capstick.

Here's the schedule from the Radio Times for the week commencing 27 September 1975. 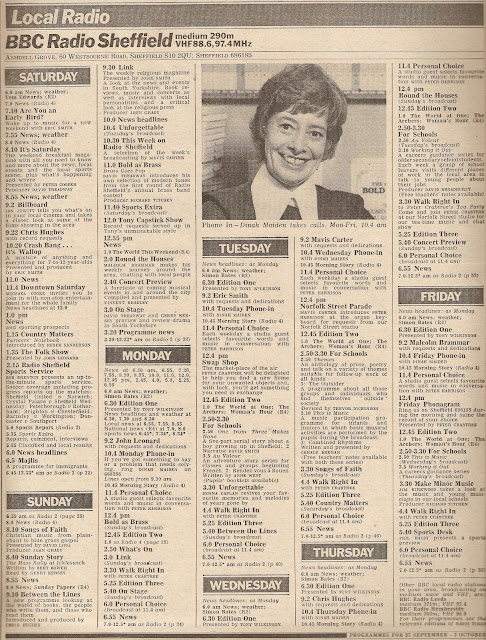 The listings are packed with names that will be very familiar to Radio Sheffield listeners in the 70s and 80s. Dinah Maiden was Sheffield's phone-in queen. A station regular for 20 years Dinah (pictured below) had started out as a reporter and then sub-editor on local newspapers in the South Yorkshire area. She first appeared on the station in 1970 as a guest on a current affairs discussion and was subsequently asked to join the staff where she hosted the phone-in and then the breakfast show. 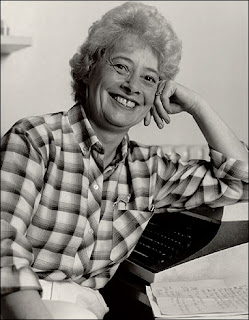 Edition One was the name of the station's breakfast show from the launch. Edition Two and Edition Three being the lunchtime and teatime news round-ups. The programme had been presented by Ian Masters (later of BBC Radio Norfolk and BBC TV's Look East) and Peter Harrison who even wrote a 26-page book about his shows - has anyone got a copy? Peter was another former newspaper man who also worked as a reporter on BBC TV's North West Tonight and as a producer on BBC Radio Manchester. At Sheffield in 1975 he was presenting the daily Personal Choice.

Looking after the 9 am requests and dedications were a number of presenters. On Monday it was John Leonard. Folk musician John had joined the station to present the folk show (see Saturday) He would also appear with Tony Capstick on Radio 2's Folkweave before leaving Sheffield and moving to network radio in Manchester in 1982 where he co-produced Janice Long's Radio 1 show and Stuart Hall's Radio 2 show alongside David Treadway (see below). In 1992 John left the BBC to form  the independent production company Smooth Operations with Nick Barraclough. 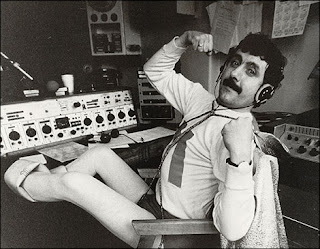 And speaking of folk singers that brings us to one of Radio Sheffield's best known voices, that of Tony Capstick (pictured above). His somewhat idiosyncratic style and self-deprecating Yorkshire humour endeared him to listeners for three decades. He'd first been heard on the station in 1969 with Capstick's Carve-Up and then, as listed here, a Sunday lunchtime request show. Later he added a Saturday show before moving to weekdays in 1978 where he stayed until a rather ignominious sacking in 2003, he died a few months later.

Sheffield's afternoon show was Walk Right In. It had started in 1970 with Peter Crabtree and Ian Masters but by 1975 it was just Peter in the studio. He'd started in local hospital radio doing sports commentaries and before becoming a sports reporter on Radio Sheffield and then joining full-time in 1969, staying for 20 years.

One of local radio's longest-serving presenters pops up on Tuesday's request show and twice on Saturday with Are You an Early Bird? and the children's programme Crash Bang...it's Wallop. Eric Smith had initially joined the station, "after many unsuccessful applications to the BBC", in 1973  as the record librarian. He later gained a daily show and then moved over to Radio Stoke in 1978, did a spell on BBC TV in the north east, was back at Sheffield in 1980 before joining the launch team at Radio Aire in 1981. Eric briefly worked at Radios Humberside and Cumbria before moving to Shropshire in 1988 and for the last 20 years he's presented BBC Radio Shropshire's breakfast show - the last 6 years co-hosting with Clare Ashford.

Michael Cooke was familiar to both TV and radio audiences in Yorkshire, appearing on Look North from Leeds alongside his radio appearances. He was a lecturer when he made his first broadcast on Radio Sheffield in 1968 and was subsequently invited to work for the station. In this schedule he presents Downtown Saturday but by 1978 he had a daily show on the station and remained on-air until the 1980s. On Radio 4 he also presented The World at One and PM Reports in 1973/4, Today 1976-8 and Sunday 1979-82.

Listed as both presenter and producer is David Treadway. Initially freelance he joined the staff of Radio Sheffield in the early 70s. Moving to Glasgow in 1978 he worked as a producer for BBC Scotland and managed the BBC Scottish Radio Orchestra. In Manchester he worked for both Radios 1 and 2 co-producing with John Leonard. He became Radio 2's Assistant Controller in 1983 before leaving the BBC in 1990 to join United Artists Communications. More recently he has worked for 3i plc, WRN Broadcast and, in 2016, appointed as an MD at RR Media.

Radio Sheffield is marking its 50th birthday with a couple of special programmes today. At 10 am Paulette Edwards and Rony Robinson broadcast live from the City Hall and then at 2 pm Steve White looks back the big momentsin the station's history.

To mark the anniversary the station's listeners were filmed performing this re-working of Pulp's Common People:

Andy, what a shame you never mentioned BBC Radio Sheffield's biggest gift to the radio industry, the first ever football phone-in? It's inventor, Robert Jackson, explains all about it here:

Thanks Charles. In did hear about the origins of Praise or Grumble during the day on Radio Sheffield (15 November) as part of their 50th celebrations.