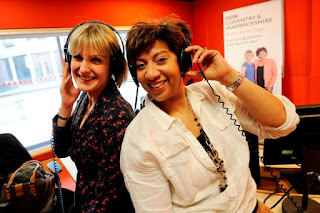 At the 2016 Gillard Awards the station of the year went to BBC Coventry & Warwickshire. The station's breakfast show claims (or claimed) to be "the first fully female-fronted breakfast show in the UK". Trish Adudu and Jo Tidman took over the slot at the beginning of 2016. From March of this year it was just Trish presenting the show whilst Jo concentrated on the news reports.

A year ago Coventry City had crashed out of the FA Cup and June Brown, aka Dot Cotton off of EastEnders was been asked to stay on  soap until she was 90. Despite what you hear in this edited version you'll have to trust me when I tell you that I cut out numerous references to Dot Cotton "hanging up her tabard".