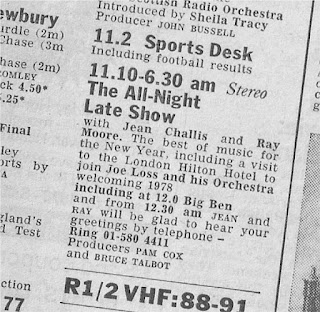 A Happy New Year to all the readers and supporters of the blog. As a special treat I'm taking you back exactly forty years and the overnight show on BBC Radio 2, seeing out 1977 and welcoming in 1978.

This was the third year that both Ray Moore and Jean Challis had hosted an all-night late show at a time when overnight broadcasting on the station was restricted to New Year's Eve, occasional overseas sports coverage and US elections. In 1977 Ray was coming to the end of a stint presenting the weekend late shows before moving into the early show seat vacated by his mate Colin Berry. Jean Challis was usually to be found linking families around the world on Family Favourites.

Live from Broadcasting House the programme also included a visit to the Hilton Hotel to hear Joe Loss and his Orchestra with Ray making the dash over to the hotel to introduce proceedings. Sadly that bit of the show is missing. But there's still just over an hour's worth of audio to savour.
Musically speaking we're still in the period when needletime restrictions means that records - from the likes of Roger Whittaker and Peters and Lee so nothing too raucous for a party night - were interspersed with the BBC Radio Orchestra, the BBC Big Band and the Don Lusher Quartet.

Such was the rarity of overnights on Radio 2 that Jean mentions that listeners to BBC Radio Oxford have just joined and there's a hello to BBC staff working over in the Bush House newsroom.

This recording comes from two sources. The bulk of it was recorded by Martin Ward, running from about 12.50 am to 1.50 am on New Year's Day 1978, so all the midnight shenanigans aren't here. Jimmy Kingsbury is heard reading the 1.00 am news bulletin. As Presentation Editor Jimmy often took these unsocial hours shifts and he would also have read the 12.33 am shipping forecast on 1500m long wave - not heard on this VHF recording.

Topping and tailing Martin's recording is my own off-air snippets of the show opening and then winding-up at 6.30 am.

The original All-Night Late Show ran at just under seven-and-a-half hours kicking off after 11.00 pm news read by Paddy O'Byrne and Sports Desk with Tony Adamson. Sarah Kennedy was on continuity duty that evening.

So here's a taste of how Radio 2 sounded four decades ago. Cue Count Basie with Nice 'n' Easy.


With thanks to Martin Ward
Posted by Andy Walmsley at 01:15

Happy New Year! Love to read this again, especially with New Year kicking in.I wonder if you could write about how overnight New Year special programmes have evolved in Radio 2 and even 1. It's awesome to hear of programmes like these that keep listeners entertained even after the festivities have reached their ante. 😀