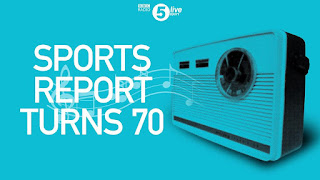 In January 2013 I wrote about Sports Report and Saturday afternoon sports coverage. This month we've now hit the 70th anniversary of that venerable radio institution which has prompted me to have a dig around in my archive and uncover past anniversary editions.

I've previously posted the 40th anniversary edition of Sport on 2 with Peter Jones but this is now uploaded to YouTube.


For the 50th anniversary there was a special edition of Sport on Five with Ian Payne. It seems I only kept the Sports Report sequence which was pretty much business as usual though there are some reminiscences from Cliff Morgan towards the end.


The recording then shifts to Saturday (6th) with the start of 5 live Sport on FA Cup Third Round day presented by Mark Chapman and then Sports Report, just a 30-minute edition to allow for commentary on the evening match between Norwich City and Chelsea.

Many thanks for the great post on Sports Report. What a great legacy! There is much to admire in the fact that the BBC has kept a program on the air this long. Other broadcasters would do well to take note that innovation isn’t always the best thing to do.

The memories of the late Peter Jones in some of these clips bring back many happy memories of listening to him via Saturday Special on the BBC World Service.