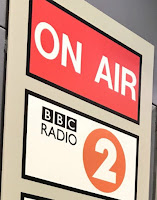 This post should be subtitled The Sound of Silence. When this week's Jamie Cullum's Radio 2 show was unexpectedly truncated - a beginning and an end but seemingly the middle section had dropped down a digital black hole - and the 'emergency tape' kicked in it didn't go unnoticed; social media and the fact that it's the biggest station in the UK saw to that. [The full pre-recorded version of Jamie's show is no online]

The use of playout automation and voice-tracking have long been a feature of radio station output and, for the most part, work seamlessly so listeners shouldn't be able to spot the difference. But when Radio 2 adopted the VCS Autoplayer in September 2012 for a while it was a case of 'mind the gap'.

Radio 2 was aiming to make efficiencies and the use of automation was noticeable in the evening and weekend programming when, one assumes, technical staff were thin on the ground. Most of the early teething problems involved the junctions out of news bulletins with the next programmes fired off at exactly three minutes past the hour cutting off newsreaders in their prime.

The network's problems were compounded when in January 2013 two programmes played out at the same time with Michael Ball and Russell Davies's show both simultaneously competing for about 15 minutes of airtime. Later that year, in October, we got two Bob Harris's for the price of one when the end of BST seemed to send the system haywire.

Here are a few example I collected at the time.


Note the jokey but rather pointed comment from Richard Allinson "normal service ... well that went out the window ages ago" was made around the time in 2012 when the old team of newsreaders was phased out and the automation came in.

At 6:19 we get part of the infamous Bob Harris show from 27 October 2013 with two parts being played out at once.

And finally at 12:49 from 22 June 2015 Jeremy Vine signing off and Steve Wright loving a technical fault.


Needless to say Feedback picked up on all the drop -outs. On 28 September 2012 they dealt with one minute silence the previous Sunday night which was blamed on an "internal broadcast circuit" plus other losses of lines on Any Questions? and Today.  The 1 February 2013 edition called Radio 2 controller Bob Shennan to account who puts it down to 'human error'.