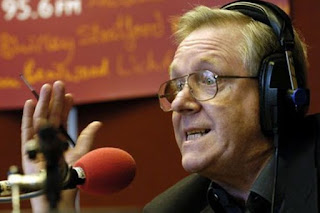 For four decades Ed Doolan was one of the broadcasters that defined radio for the listening folk of the West Midlands. An intelligent interviewer, a champion of consumer affairs and with one of the biggest contact books in the business Aussie-born Ed became an honorary Brummie on BRMB and BBC WM. His death was announced today.

Born in 1941 in Sydney, Australia Ed had always wanted to be a broadcaster but his parents had other ideas and were keen for him to have a career in teaching.  But that didn't stop him hanging around the Macquarie Broadcasting audience shows in the 50s and 60s to get his radio fix.

Like many fellow young Australians he chose to pursue his career in the UK and in 1966 he became a teacher in Edinburgh and then London. By 1970 he'd moved across to West Germany as part of an exchange programme and dipped his toe into radio at Deutsche Welle. "Some friends who had contacts in Cologne told me they needed an English voice on German Overseas Radio. Mine was near enough".  His first broadcast was in September of that year on a 15-minute documentary called Hitch-Hikers in Germany. He also presented Afrika-Englisch Current Affairs for Deutsche Welle, Deutschlandfunk English transmissions to Britain and Top Marks School Quiz for the BFBS.

Ed moved back to the UK and joined the newly launched BRMB station in Birmingham. Initially presenting the weekday afternoon show he later moved into mid-mornings, a timeslot that later would become his natural home for many years. He was keen to hone his craft and took to recording his own shows. "Every night when I go home I listen to every link," he said in 1975. If  something had gone wrong "I will sit and listen to it two or three times until I have put my finger on where it went wrong". Incidentally Ed was a keen home taper and his archive of TV and radio shows have since helped fill some of the gaps left after broadcasters junked their tapes.

In September 1982 he jumped over to the opposition at BBC WM presenting a show between 12 noon and 1 pm, later on the breakfast show and then a mid-morning show. As well as covering the news stories of the day he would interview many politicians and celebrities - some of those celebrity set piece interviews have enjoyed repeats on Radio 7/4 Extra. By 1988 his programme started to champion the cause of his listeners and he was adept at challenging local government and companies to sort out injustices and shoddy service.  His broadcasting style was, albeit briefly, recognised by network radio when he sat in for Jimmy Young on Radio 2 in 1995 and 1996 but he remained loyal to his West Midlands audience.  He was awarded an MBE for his services to broadcasting and charity, won a Gillard Award and was inducted into the Radio Academy Hall of Fame.

In 2011 he stepped down from his daily show, Lunch with Ed Doolan - at the time he was also presenting a Sunday afternoon show, Ed Doolan: Other Side of - and just retained the Friday show and a new 3-hour Sunday morning show.  In 2015 he announced that he been coping with dementia for a couple of years but he continued to record introductions for a one-hour Sunday show featuring highlights from his big name interviews and radio archive, with the most recent show going out just a few days ago.

This tribute programme aired in 2015 and is presented by Jasper Carrott.