For nearly thirty years Radio 1's weekly In Concert provided listeners with the opportunity to hear their favourite bands and singers perform live in front of an audience. They ranged from the famous - Queen, Bowie and Pink Floyd - to the not-so-famous - Splinter, Bell 'n' Arc and Trapeze.

Producing these concerts were Pete Ritzema and Chris Lycett, but by far the greater share of the production duties fell to Jeff Griffin who worked on about 800 programmes. Griffin had been a BBC engineer before turning to music production, on the old Light Programme, in 1964. His first credit, incongruously, was for Mrs Mills and her Mates but he later produced shows such as Swingalong, Ed Stewart's first series for Radio 1 Happening Sunday, David Symonds, Scene and Heard, Savile's Speak-Easy, Sounds of the Seventies, Alexis Korner, Rock on Saturday, Andy Peebles, My Top Ten,  Roger Scott  and The Rankin' Miss P.

In 1991, when In Concert was celebrating 21 years on air, Jeff Griffin spoke to Lloyd Bradley of The Independent about some of the more memorable gigs. Here's part of that article, illustrated with clips from the show.

Led Zeppelin
My main aim was to do a Jazz Club-type rock programme with acts playing in front of an audience, but the BBC thought of rock groups in terms of singles. Live In Concert didn't get off the ground until 1969 when I was talking to Jimmy Page after Led Zeppelin had done a Peel Session. He was moaning that the session format didn't give them a chance to show what they were about, so I explained my idea and asked if they would do the pilot. They agreed. It went very well and after a lot of umming and ahhing my bosses agreed to do a series - but only if John Peel compered. (This clip comes from a 1971 performance that is introduced by Peel).

T. Rex
For the first show in January 1970 I'd booked Family, and Roger Chapman lost his voice that day. After five years telling my bosses the show was a good idea, this was a disaster. Then Peel wandered in and said he'd 'give Marc a ring' - Marc Bolan, who lived up the road from the theatre. Bolan said he and Steve Peregrine had no plans that evening, so we told them to get in a cab! They did 35 minutes, then Family did three instrumentals and Roger croaked his way through a couple of songs. This was pre-Ride a White Swan and Bolan seemed grateful for the exposure.

David Bowie
He was on the sixth show, and it was the only opposition I got from my elders and betters. I was called up to see the Assistant Head of Popular Music and asked why I'd booked him. Rock acts were still greatly mistrusted at the BBC, and their train of thought was that this guy who'd had one hit couldn't possibly play a whole show. I had to convince him that David Bowie was capable of keeping people interested for an hour! they left me alone after that. (This clip comes from a 1971 concert).

Pink Floyd
Despite what's been said elsewhere, this was where Atom Heart Mother got its title. This was the first time they performed it in public and when John Peel asked Roger Waters what the piece was called, so he could introduce it, Waters said he had no idea. Later on Peelie came in with an evening paper with a front page story of a heart transplant patient - the caption was 'Atom heart Mother' and Waters, reading over his shoulder, said 'That's it! That's what we'll call it!' Peelie said 'What's it got to do with music?' and Waters replied 'Nothing, but who cares?' (This clip comes from a 1971 concert broadcast in Sounds of the 70s).

The Faces
In 1973, during the three day week, we knew we were going to have a power cut at nine o'clock and had to put them on an hour early to get done. They agreed, but getting The Faces out of the pub was a different matter. Rod especially, as he had drinks that people had bought him lined up on the bar (he never, to my knowledge, put his hand in his pocket). They went on stage dead on eight, played straight through and after 59 minutes and 50 seconds, during their last number, the electricity went. The weird groaning noise is still on the tape, as every piece of electrical equipment lost power.

Queen
The first recording we did of them is proof that Freddie Mercury used to get stage fright. It was in 1973, before they broke big. They'd had very little live experience and the environment of the BBC theatre was a strange one; it was the size of a club - 300 capacity - yet it was like a concert hall. It wasn't a brilliant show as I'm sure Queen were intimidated.

Ian Dury
When I had him on, Live In Concert had developed into Sight and Sound, and Ian gave me my first censorship problem. We always felt that people bothering to tune in to the radio show weren't going to be troubled by a bit of risqué language or dodgy lyrics, but television had the 9 o'clock watershed and the TV people were very concerned about a couple of songs on New Boots and Panties, particularly Wake Up and Make Love to Me. I didn't want TV taking over what was designed as a radio show, and Ian didn't want to alter his set. he went ahead and played the songs, and there were only a few complaints. (This clip comes from a 1979 concert).

Off the Record was published in The Independent on 17 October 1991.

In Concert - The Timeline 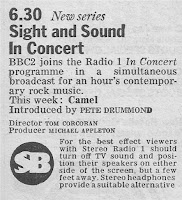 In Concert ran on Radio 1 from 1970 to 1998. It first appeared on Sunday afternoons from 4 January 1970 but was billed as The Sunday Show - this title was dropped from April. In October 1970 it moved to a Sunday evening timeslot, and a year later was part of Tuesday night's Sounds of the 70s.

From January 1972 In Concert moved to Saturday's at 6.30 pm, where it remained for the next sixteen years. Presenters in the early 70s included Mike Harding, Andy Dunkley and Bob Harris, but staying with the programme the longest were Alan Black and Pete Drummond. There were simulcasts with BBC2, Sight and Sound In Concert, between October 1977 and April 1978 and again in early 1983. In Concert was part of Rock on Saturday in 1980/1 and the Stereo Sequence in 1987/8.

From October 1988, and for the next decade, In Concert started to move around the schedule. Firstly off to Friday nights and then Saturday night from January 1990. By November 1993 it was part of Johnnie Walker's Saturday Sequence, initially on Saturday night but shifting to the afternoon from November 1994. When Johnnie left Radio 1 in October 1995 it was back as a stand-alone show on Saturday afternoon, moving to Monday nights from January 1996 and finally Sunday nights from March 1997.

The final regular In Concert programmes on Radio 1 were in the summer of 1998 featuring Shed Seven and then a couple of Glastonbury highlights. From that October weekly concert performances became part of Radio 2's schedule, though in recent years the number of live concerts has been reduced to a handful at a time. They are, at least, back as 'sight and sound' with coverage on the Red Button and TV repeats on either BBC Two or BBC Four.
Posted by Andy Walmsley at 11:00

Worth noting: the Saturday 'In Concert' programmes went to VHF/FM (what were mostly the Radio 2 frequencies) on 7th April 1973 - Radio 1 getting the higher fidelity on Saturday afternoons was a big enough event that it got a Radio Times cover, with Mick Jagger appearing, I think, for the first time in that context, in the year the Stones made the decisive shift to International Jet Set, because part of that first FM schedule was The Rolling Stones Story. From October 1988 they weren't available in FM nationally for a period. With the sole exception of Sport on 2 on 27th December 1977, from whose intro you once uploaded a VHF clip, the last Saturday afternoon BBC Radio sport programme to be available in better than MW/LW quality until digital transmission became widely available was that of 31st March 1973 - the day of one of Peter Bromley's most famous calls: "and the rest don't matter - we'll never see a race like it in a million years!".

Interesting to think of that response to Bowie considering how central to the new establishment he became - though Bowie, certainly compared to Jagger, McCartney et al, clearly didn't really want to be Elgarised, as is shown by his turning down a knighthood when offered by both Blair & Cameron.