This month both BBC Radio Wales and BBC Radio Scotland mark their 40th anniversaries. Re-launching as fulltime services - well pretty much full-time - in November 1978, a move to coincide with the wavelength changes that saw Radio 4 offer a nationwide coverage on 1500m long wave.

Previously the radio service in each country had used Radio 4 as a sustaining service and opted-out at certain times of the day, usually at breakfast, lunchtime and the early evening. They also provided separate news bulletins and weather forecasts and even their own continuity announcements between the Radio 4 programmes to give a sense that it was all coming from either Cardiff or Glasgow. From 1978 they broadcast for longer on medium wave, with Welsh or Gaelic language programmes on VHF, but still switched over to both Radio 2 and Radio 4 for some key daytime programmes such as The World at One and Woman's Hour.

Here's a little pre-history as to how these radio stations came about.

Radio broadcasting had started in Wales in 1923 with the opening of Cardiff station 5WA on 13 February. Swansea's 5SX was added on 12 December 1924. In Scotland Glasgow station 5SC came on-air on 6 March 1923 followed by Aberdeen (2BD) on 10 October, relay station 2 EH in Edinburgh on 1 May 1924 and one in Dundee (2DE) on 9 November that year. They became part of the Regional Programme in the 1930s and after the war each had their own variations of the Home Service offering a full range of alternate programmes from the London-based national service, from news, sport and classical concerts to variety, comedy and drama. This arrangement continued from 1967 under Radio 4 but with a gradually reducing range of programmes. 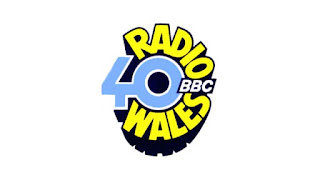 In Wales listeners had enjoyed an alternative to Today since 1964 when Good Morning, Wales! started its weekday service with Vincent Kane  - the programme having first started in 1963 as a pre-recorded Saturday morning magazine. Other presenters included news reporter Gareth Bowen  (father of the BBC correspondent Jeremy Bowen) who'd would eventually become the news editor for Radio Wales.

In 2013 Huw Thomas provided this potted history of the morning programme.

By the mid-70s amongst Radio 4's Welsh service offerings were Bore Da! with T. Glynne Davies, partial opt-outs from PM Reports called Dateline with George Ashwell and Gerry Monte and for Welsh speakers Cymru Heno with William Owen, the Saturday teatime sports results services in both languages Sports Medley and Chwararon. There was also the weekday mid-morning show that alternated between being a talk show and a record request show called Nine Five presented by, amongst others Wyn Calvin, David Parry Jones, Alun Williams, Vince Saville and Gerry Monte (pictured below). One of the producers was Teleri Bevan who'd go on to be Radio Wales's first editor. 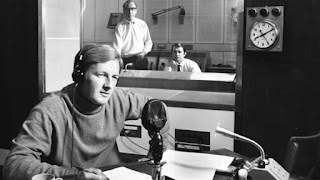 On 3 January 1977 the BBC formally introduced separate services for the country, Radio Wales on 341m and Radio Cymru on VHF, although the dearth of VHF sets meant that about one-third of Welsh language programmes were still carried on medium wave. It wasn't a full-time service so they still carried a high proportion of Radio 4 programmes. On-air changes included Good Morning Wales became one long sequence running from 0645 to 0900 with Kane joined by Noreen Bray and over on Radio Cymru Hywel Gwynfryn hosted Helo Bobol!

The transfer of 1500 metres long wave from Radio 2 to Radio 4 on 23 November 1978 meant that Radio 4 could offer a full UK-wide service and just ahead of that date, on Monday 13 November, Radio Wales was formally launched as an expanded service with English-language programmes increasing from 20 to 65 hours a week. It was now released from the obligation to carry Radio 4 programmes but a shortage of funds meant that in fact for the first few years it still switched over to the network, either Radio 2 or Radio 4, at intervals during the day.

In this edition of Radio Greats from 2014 Roy Noble looks back at the career of Vincent Kane.

North of the border Radio 4 in Scotland was rebadged as Radio Scotland on 31 December 1973 to coincide with the start of the new morning news and current affairs sequence Good Morning, Scotland. It can't have been a coincidence that this was the same day that Radio Clyde launched.

Despite the name change it was still essentially offering Radio 4 programmes with Scottish opt-outs during the day. The kind of programming on offer not only included the Today alternative Good Morning, Scotland with John Milne and David Findlay, there was the midday entertainment  show Twelve Noon with a different daily theme and a rota of presenters including Ken Sykora, Gerry Slevin, Michael Elder, Robin Richardson, Alastair Clare and Bob Docherty. The partial opt-out from PM Reports was North Beat plus there was Saturday sports coverage on Sportsreel, a smattering of Gaelic programmes and some music shows including Studio One Concert and, inevitably, Scottish country dancing.

Meanwhile BBC Scotland opened a number of VHF-only community stations broadcasting for just a few hours a day when not carrying the Radio Scotland/Radio 4 programmes. Starting in 1976 there was Radio Highland from Inverness, BBC Radio Aberdeen, and, in 1977 Radio Shetland and Radio Orkney.

The new revitalised Radio Scotland that launched on 23 November 1978 offered, in the words of the BBC handbook "a single service for all Scotland, to speak with a distinctive Scottish accent, to be the authoritative voice of Scottish News and Current Affairs and to be more popular than the previous Radio Scotland opt-out Service from Radio 4". Thirty new production staff were recruited and the news team moved to new studios in Edinburgh.

Marking the new service was an opening night concert simulcast on Radio Scotland and BBC1 with Andy Cameron and Tom Ferrie live from the Kelvin Hall, Glasgow introducing acts that included the Brotherhood of Man, Alan Stewart, Scott Fitzgerald and Norman Maclean.

In this clip the continuity announcer  is one Ken Bruce who hands over to Peter Easton. 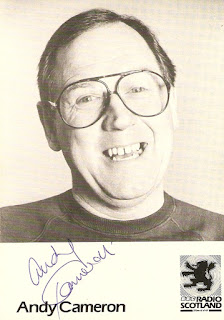 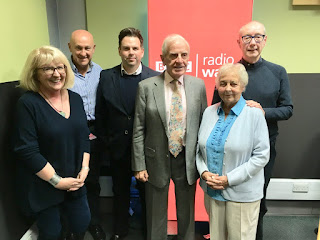 Both stations have a number of programmes celebrating their four decades of broadcasting. On Radio Wales listen out for:

On Radio Scotland you can hear:
Radio Roots a 2-part look at Scottish comedy presented by Ian Pattison
40-LOVE a feature about "the love shared in the families of some very special Scottish 40-year-olds"
Boogie Nights on the 1978 disco explosion as seen from Scotland
The Afternoon Show on 23 November with Janice Forsyth and guests
Take the Floor with a special ceilidh from Glasgow Barrowland
Take the Floorwith Robbie Shepherd and a 40th birthday special Reel Blend

Thanks for the heads up on the anniversary programmes - will try and catch them on the I player, um, BBC Sounds...

Remember being able to get the R.Wales opt-out service, Radio Clwyd on 657 from West Yorkshire back in the eighties - also intrigued by the reference to OU programmes 'for Scottish students only' at the foot of those RT listings. What was going on there?

And obviously these launches were timed for Callaghan's abortive devolution plans.

In 1996 I picked up either Radio Wales or Radio Cymru on FM on the Dorset coast (had Radio Wales begun its FM rollout by this point?), and even Radio Scotland on MW! (Also a French station on FM talking about the Englishness of Blur and XTC ...) Later I routinely got better Radio Wales on MW at night than Virgin (as was) or even TalkSport, and used it to listen to the Welsh chart show regularly.

On second thoughts, I think on that 1996 occasion (16th November iirc - what a memory I have!) I picked up Radio Cymru on FM, and Radio Wales on MW probably on the same day.

Can anyone help me i am trying to obtain a copy of a recording of an interview broadcasted on a sunday by Vince saville on radio 4 around 1966-1972 does anyone know if these recordings were archived.