The End of the Ride 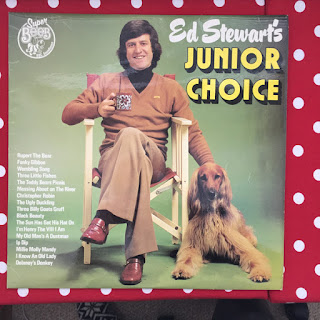 By any stretch of the imagination this blog post is niche. It concerns a drum ending that lasts just one second. Yes, zip up your radio anorak for this one.

As you'll no doubt know, back in the days when virtually every show had a theme tune, Radio 1's Junior Choice used a version of Morningtown Ride played by Stan Butcher's Birds 'n' Brass. That theme was first used on day one of Radio 1 when Junior Choice, the replacement to the Light Programme's Children's Favourites, was introduced by Leslie Crowther. Crowther was followed by Paddy Feeney and then, from February 1968, by Ed Stewart. Stewpot used the theme for the next 11 years. Here's Leslie Crowther introducing that first edition followed by the theme in full:

A brief diversion here on Stan Butcher. Butcher, a pianist, composer and arranger, was born in London in 1920. His first job was for music publishers Boosey & Hawkes. He taught himself harmony and arranging and before he was twenty was providing orchestrations for the likes of Bert Ambrose and Harry Roy. During the war he served in the army and before the end of hostilities he'd been asked to form a dance band that included amongst its personnel trombonist Don Lusher and guitarist Jack Toogood. On demob he played and arranged for bands run by Joe Daniels and Freddy Randall before joining publishers Campbell Connelly & Co. He wrote and arranged for the likes of Ted Heath, Cyril Stapleton and Eric Winstone and with Syd Cordell composed the 1959 Eurovison song entry for Pearl Carr and Teddy Johnson, Sing, Little Birdie. In the late 1960s and early 70s he recorded a number of LPs. Some of these were credited to Stan Butcher's Birds 'n 'Brass. The 'birds' were singers Barbara Moore and Daphne Bonney. Barbara would herself carve out a successful musical career as a singer (she was for a time one of The Ladybirds), composer and arranger. It was she that provided the new arrangement of Fluff's Pick of the Pops theme At the Sign of the Swinging Cymbal and wrote Just Like That for Terry Wogan's Radio 1 afternoon show. Continuing the radio theme connection it was Barbara's husband Pete that arranged and recorded the version of I Love You Samantha that was used by David Jacobs. Stan Butcher continued recording in the 1970s and worked with Stan Reynolds and Barbara Thompson. He died in 1987. 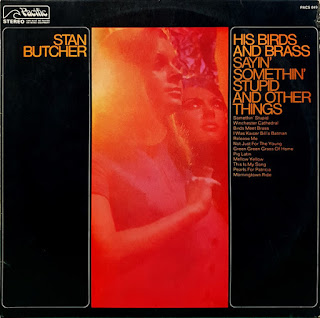 Back to Morningtown Ride. This was a hugely popular tune when Radio 1 started, it had been the number two song at the start of 1967, just pipped to the top spot by the Green, Green Grass of Home. The lyrics telling of children on a night time ride safely delivered to the morning under the watchful eye of the Sandman had great family appeal. So when Stan Butcher and producer Monty Babson put together their 1967 album of covers from the recent 'Hit Parade' called Sayin' Somethin' Stupid and Other Things, they included Morningtown Ride. Other tracks included I Was Kaiser Bill's Batman, Mellow Yellow, This is My Song and Green, Green Grass of Home. Some extra tracks composed by Butcher were added such as Pearls for Patricia and, most importantly for this story, a jaunty little tune called Pig Latin. That track went like this:

When Junior Choice came along in September 1967 they ditched the old Children's Favourite theme of Puffing Billy in favour of something more contemporary, and that was Morningtown Ride. However, the  problem with this recording is that it faded rather than ended. Junior Choice was heard on both Radio 1 and Radio 2 so a definite end would give a neat junction for the two networks to split. On Saturday's the programme ended at 9.55 am with Crack the Clue following on Radio 1 and the religious slot Five to Ten on Radio 2. On Sunday mornings there was a split following at 10.00 am time signal.

So someone at the BBC, perhaps producer Harry Walters, came up with the neat idea of borrowing the drum ending from Pig Latin, probably played by session drummer Barry Morgan (he was credited on Butcher's previous LP) and splicing it onto Morningtown Ride. Neat. Here it is in use by Stewpot in 1979 by which time the show was on Radio 1 only so there are no pips and it's just a handover to Tony Blackburn. I've added my own version of how the track was edited.

But the story doesn't end there as Pig Latin happens to have done double duty as a theme ending, this time for Alan Freeman.

In April 1972 Terry Wogan left his afternoon Radio 1 show to start his reign as Radio 2's breakfast supremo. That afternoon show was then given to Fluff alongside his existing Pick of the Pops chart rundown. Of course it also needed a theme tune and this time it was back to 1962 for a superb orchestral jazz piece from Quincy Jones, Soul Bossa Nova. Freeman's producer was Bryan Marriott who had been a regular producer of Jazz Club in the early sixties so it's likely he'd dug this one out. The track also had the pauses and changes of instrumentation that allowed Fluff to deliver his introductions and goodbyes in his distinctive staccato style.

The trouble with Soul Bossa Nova was, yes you've guessed it, it faded rather than having a definite end. So out comes Pig Latin again and hey presto they have an ending, though it has to be said its a rather more obvious edit. Here's Alan using the theme and  handing over to Rosko in 1973 followed by my own edit to show how they did it.

With thanks to Tony Worrall who first alerted me to this.