Not the A to Z of Radio Comedy: M is for Maggie's Ten-Year Turkey 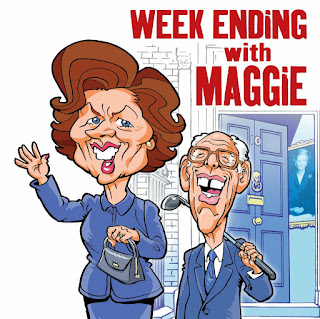 Maggie's Ten-Year Turkey was a Week Ending spin-off akin to those monthly programmes under the title Two Cheers for... broadcast on the BBC World Service throughout the eighties and into the nineties. This was a little different though: the timescale was considerably longer, taking in the decade of Thatcher's premiership and it was actually compiled as an audio cassette release called Ten Years with Maggie. That tape ran for over two hours but was trimmed down to just under half-an-hour for broadcast on the World Service in December 1989 and this Radio 4 broadcast the same week.

The tenth anniversary of Thatcher as PM fell in May 1989 but it was decided to hold off publication until later in the year as cash in on pre-Christmas orders. Producer Paul Spencer was disappointed as to what Week Ending material was available in the Sound Archives so two contract writers, Mark Brissenden and Simon Bullivant, went off to the Written Archives to dig out some old scripts. This meant re-recording all the sketches, though this would prove less expensive than paying fees to various performers had any archive material being used - and one reason why so few editions of Week Ending have ever been repeated. It also meant that Sally Grace could provide the voice of Margaret Thatcher throughout, Sheila Steafel had been doing this back in 1979.

The trimmed down for broadcast version, Maggie's Ten-Year Turkey, was broadcast on the BBC World Service on three dates in late December and Radio 4 on the 30th. In this recording announcer Peter Jefferson invites listeners to apply for tickets for Radio 1's The Mary Whitehouse Experience that was just about to start its third series.