Back in Time On the Light – Part 2 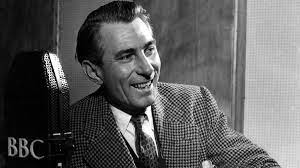 Back in August I dipped into the collection of donated recordings made in the early 1960s. It’s time for a second set of BBC Light Programme shows, both of which date from exactly 61 years ago.

First up is another Record Roundabout show with Jack Jackson (pictured above). From this hour long show we get to hear the last third or so. As usual Jack intersperses the tracks with comedy clips. The music on offer this time, none of which troubled the British hit parade, is:

I Found a New Baby – The Trombones Inc.

The second show from Monday 19 December 1960 is Music for Sweethearts “a late evening setting for romance” with the sound of Eric Jupp at the piano and with his orchestra. This late-night show of lush orchestral music - and based on this evidence arranged to induce you into a deep slumber - ran, at intervals, from June 1957 to December 1961. 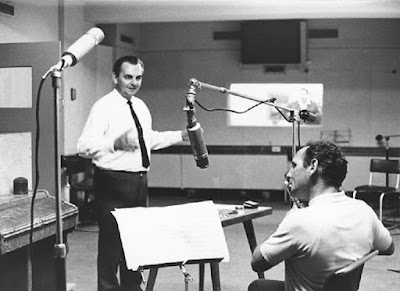 Eric Jupp (pictured above left with flautist Don Burrows) had been a staff arranger for Ted Heath and his Music and a long-time member of the Oscar Rabin Band. He was already a familiar name to radio listeners appearing on a number of shows from the mid-50s on including In the Still of the Night, Morning Music, Show Band Serenade, Our Kind of Music, In Show Band Style and Saturday’s Music Album.
Jupp’s orchestra was featured in Music for Sweethearts until October 1959. The following year he went over to Australia on a short-term contract with the Australian Broadcasting Corporation so that when the series returned in April it was Johnny Pearson conducting. Jupp was back in October 1960 and this recording is his last appearance. In 1961 Jupp made a permanent move to Australia initially working as a music advisor for ABC’s Light Entertainment division in Sydney and then mainly as a film and television composer. His orchestra was featured on the ABC show The Magic of Music (1961-74) but perhaps his greatest musical contribution is a tune seared into the mind of many sixties children that of the theme to Skippy the Bush Kangaroo. He briefly re-appeared on the Light Programme in 1965 in Melody Hour and in 1966 one of his Australian series was re-broadcast by the BBC.

For the final series of Music for Sweethearts (April to December 1961) the music was provided by Eric Cook and his Orchestra. Cook too would also emigrate to Australia in the 1960s.

Making the introductions is David Gell, who’d presented the show since April 1958. David would host hundreds of programmes for the BBC and Radio Luxembourg as well as being a familiar face on ITV music shows before returning to his native Canada in 1977.

Music for Sweethearts ran at half-an-hour but this recording is of the first 20 minutes.

These recordings were made by the late Eric Bartington and I extend my thanks to Gerad de Roo who rescued them and passed them to me.