Loudly proclaim with one accord 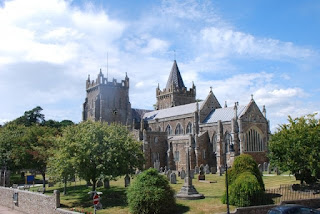 The sound of church bells ringing out on Christmas morning was part of the radio landscape (on BBC national radio) for just over four decades.  The peal of bells from British churches and cathedrals were featured in a short programme (10 to 20 minutes) on the Home Service and then Radio 4 between 1943 and 1986. For the almost half that time they were introduced by Robert Hudson (commentator mainly for cricket and numerous royal events) but earlier sequences were linked by staff announcers or former staff announcers. 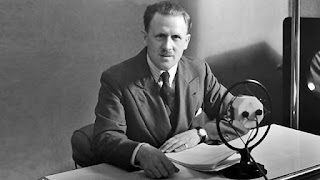 Introducing the bells is Stuart Hibberd (above), the former announcer best remembered for some of his important pre-war and wartime announcements. He retired from the BBC in 1951 but continued to present the weekly series The Silver Lining – talks designed to provide “comfort and cheer for all in trouble, sorrow, need, sickness, or any other adversity” – until 1964.

Church picture credit thanks to Sandra Wright at https://www.otterystmary.info/