Down Your Local - Radio Clyde

This is the third post in a series looking at the original nineteen ILR stations. This week Radio Clyde.

Airdate: 31 December 1973
Still on air?: Yes. Since 1990 the FM service is Clyde 1 and the AM service Clyde 2.
When Clyde went on air, just in time for Hogmanay you’ll notice, there was little local competition. BBC Local Radio hadn’t yet ventured north of the border and BBC Scotland was still some five years away, so it was regional opt-outs from Radio 4 that provided the local Scottish programming.
Here’s the Radio Guide programme listings published in December 1977: 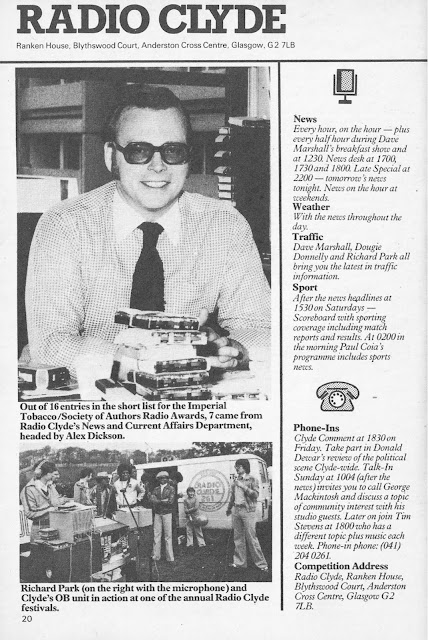 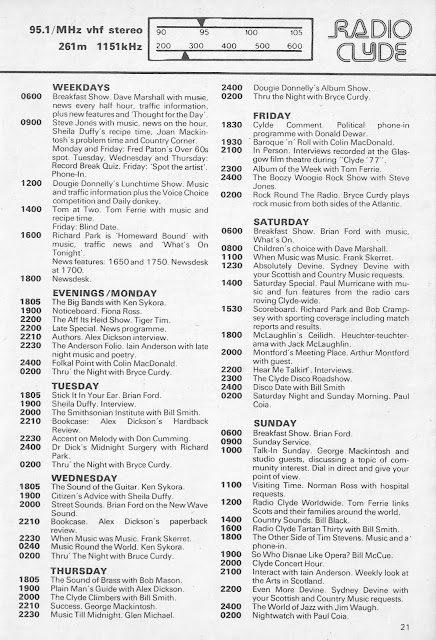 There are four names in Clyde’s 1977 schedule that are perhaps better known for their subsequent TV work – Steve Jones, Richard Park, Dougie Donnelly and Paul Coia.
Steve Jones was a music plugger when he passed an audition for BBC Radio 1 and for a while presented Radio 1 Club and deputised for holidaying DJs. He joined Clyde at the start to host the 9am-noon slot. By 1979 he was back at the Beeb as a presenter of Radio 2’sThe Early Show, alternating with Ray Moore every 3 or 4 months. In the mid-80s he’d been promoted to a daily lunchtime show at the station. But Steve may be best-known for TV’s The Pyramid Game.
Richard Park had been a pirate DJ on Radio Scotland and later joined Radio 1 where like Steve Jones he had spells on Radio 1 Club. Back in 1977 at Clyde he was presenting Homeward Bound, originally hosted by Tony Currie. Richard would go on to work at Capital Radio as Programme Controller but TV viewers will recognise him from his stint as judge on BBC1’s Fame Academy in the Simon Cowell/Nasty Nigel role.
The Lunchtime Show was presented by a name known to sports fans on BBC Scotland’s Sportscene as well as Grandstand. Dougie Donnelly got interested in radio whilst at Strathclyde University and DJ’d at local discos before joining Clyde. But he later became a familiar face on tv hosting Scottish football coverage and golf tournaments for the BBC.
Paul Coia, at this point broadcasting in the wee small hours of the morning, was the first voice on Channel 4 as continuity announcer. He’s since done loads of TV and radio work including occasional appearances with his wife Debbie Greenwood.
Tom Ferrie is still at the station, these days presenting a request show on Clyde 2. In 1977 he hosted Tom at Two as well as a Family Favourites type show on Sunday lunchtime. Tom went on to work at BBC Radio Scotland and even put in the odd appearance on Radio 2.
The Breakfast Show presenter was Dave Marshall. A former salesman his previous broadcasting experience before joining Clyde was five years in hospital radio. The weekend Breakfast Show host was Brian Ford: he came to Clyde straight from working at the Scottish Daily Mail.

Clyde still offered a wide range of evening and weekend programmes with politics, arts, book reviews, jazz, big band and folk all featuring in the schedule. Presenter of The Big Bands, The Sound of the Guitar and Music Round the World was renowned broadcaster and musician Ken Sykora. Ken had been broadcasting on the BBC since the 1950s with his Guitar Club, as contributor to Jazz Scene and for the second half of the 60s one of the regular presenters of Home this Afternoon on the Home Service and Radio 4.
The station would go on to establish ILR’s first drama department. Hamish Wilson, who produced and directed the play The Slab Boys for Clyde in 1979 joined the station full-time to lead a small unit. Wilson continued to provide drama productions for the station until the early 1990s including The Bell in the Tree about the history of Glasgow.
This is the station information published in January 1978: 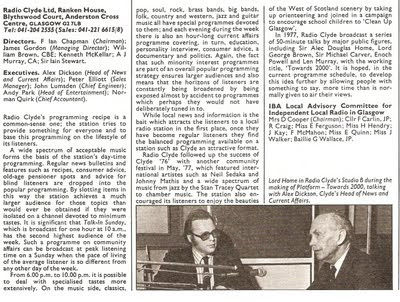 Note the name of Andy Park as Head of Entertainment. Andy was a jazz musician in Glasgow before going to Radio Clyde. He’d later work at Channel 4 and BBC Scotland TV as a producer, his best known programme was Tutti Frutti starring Robbie Coltrane. More recently Andy was back at the piano touring with his jazz octet.

There were two year long series of The Bell in the Tree," 260 episodes a year, broadcast three times a day during 1982 and 1990. All the material, including the three books based on the series, were written and researched by Scottish artist author Edward H Chisnall. The radio series, produced by both Wilson and Findlay Welsh, won multiple international awards, a gold medal in New York for the world's best written radio drama, las Premios Ondas, a silver Pegasus collected by station owner Jimmy Gordon and author Edward Chisnall in the royal palace in Barcelona maintained a remarkable standard of writing and production throughout. Chisnall's work is lodged in the Glagow Room at the Mitchell Library, Glasgow University at their request, and excerpts from Chisnall's Bell in the Tree books were given to the British National Cous at their request. It also won an award from the Radio and Television Club of Scotland as the program making the most lasting contribution to local life. Teacher's Whisky sponsored Chisnall when he came to write his second series about Glasgow and the West of Scotland. He was called 'the people's historian' by the Scottish Daily Mail.

I've just discovered an old tape sent to me back in 1974 ... early days at Radio Clyde in February 1974 with Steve Jones and Jack McLaughlin plus the voices of George Montgomery, Richard Park, Richard Loy, Bill Martin and Jim Macloud...
https://www.mixcloud.com/alfred-bunzl/ilr-radio-clyde-early-days-951-fm-stereo-steve-jones-jack-mclaughlin-15th-24th-feb-1974/