The erudite, urbane gentleman broadcaster Robert Robinson has died recently. In the first of an occasional series of Radio Lives I recall the career of the presenter of Radio 4’s Today, Stop the Week and Brain of Britain.

Following a career in print journalism and regular appearances on the television during the 1960s Robert Robinson joined the Today programme in July 1971 providing something of a donnish balance to the more avuncular co-presenter John Timpson, helping to turn it into a “much less frivolous affair” than it had been under Jack de Manio.  Robinson’s tv commitments meant that he had to move on from the programme in 1974, “I spent three years doing it and never slept at all” he said later.

In 1973 Robinson took over from the late Franklin Engelmann as the host of the Brain of Britain quiz which, along with his television quizzes, confirmed his role as question-master on the more high-brow shows.  On Brain Robinson had “a conspiratorial touch with his contestants, cheering on the no-hopers, exciting precision from brainboxes and always in league with ‘Mycroft’, his silent adviser and adjudicator on the quiz, until his death in 2002, Ian Gilles”. Those famous mannerisms became as much a part of the programme of the questions: “Ah yes  Mr Robinson, would that it were, would that it were”. He delighted in naming those behind the scenes, Mycroft on the radio and ‘Eric’ the unseen manipulator of the props on Ask the Family.

A year later from 28 September 1974 Robert Robinson was to present the new Radio 4 series Stop the Week, a bookend to Monday’s Start the Week with Richard Baker that had first aired some four years earlier. Essentially it was a round the table chat about the week’s events and the inconsequential things in life. Guests in the first programme were  Benny Green, Edward de Bono, Dennis Barker and Anna Motson but I recall the regulars as being Professor Laurie Taylor, Ann Leslie and Milton Shulman.  Stop the Week ran until 1992, axed because it had become a little too ‘clubby’, a little too sneery.

Of the show’s host Laurie Taylor said: “Robert Robinson is a very intelligent man who had a very wry sense of the media, who found the media still slightly absurd. He was President of the Johnson Society, and he was very delighted to be associated with Johnson as he had a good sort of rumbustious delight in language and in the power of language. But as a lower middle-class person, he had a very, very, very good eye for pretensions”. 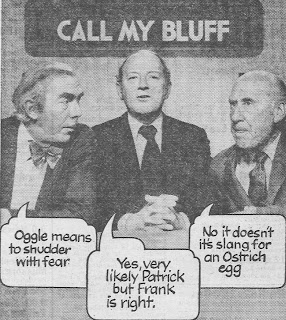 Although this is a radio blog I cannot end without mentioning Robert’s tv work. He is best known for being the first presenter of Points of View (and the first of three Robinson’s to work on the programme – Kenneth and Ann being the other two), Call My Bluff, an early hit programme for BBC2  that he chaired from 1969, and Ask the Family.

Robert Robinson continued as chairman of Brain of Britain until 2009 when ill health forced him to relinquish the role. He died on Friday aged 83.

Here’s a recording of the 1980 final of Brain of Britain first broadcast on Monday 25 August 1980. The contestants are Ralph Gordon, Dr John Perring, David Milnes and Tim Paxton. The producer is Richard Edis.


From 1986 here’s an edition of Stop the Week. Guests on this show are Sarah Harrison, Stephen Oliver, Nicholas Tucker and Laurie Taylor who discuss matters etymological and noise levels. The music is provided by Dillie Keane and the producer is Michael Ember. This programme was transmitted on Saturday 6 December 1986.
Stop the Week (click to download)

Some quotes taken from And Now on Radio 4 - Simon Elmes, Random House 2007

What a great tribute Andy and some neat downloads - well done!

A really touching tribute that I shed a tear over when I read. Thank you Andy- and for the wonderful audio links too.