Down Your Local - Metro Radio

This is the sixth post in a series looking at the original nineteen ILR stations. This week Metro Radio.
Airdate: 15 July 1974
Still on air?: Yes. The AM frequency became Great North Radio in 1989 and is now Magic 1152.
Pop music was not prominent in Metro’s early schedules and it pitched itself too much like a BBC local radio station. After a false start the station had a schedule and music policy shake-up at the end of 1974 and advertised itself as “The North East Sound”. To help change the sound of the station it became the first ILR station to use non-UK produced jingles by going to Dallas and working with PAMS. The deal with PAMS was arranged by Metro DJ, and these days a regular Jinglemad poster, Len Groat who by 1977 had moved on to Radio Trent (see later post).
Here’s the Radio Guide programme listings published in December 1977: 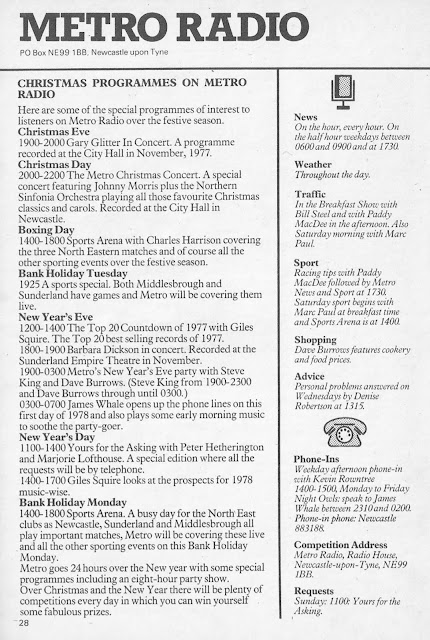 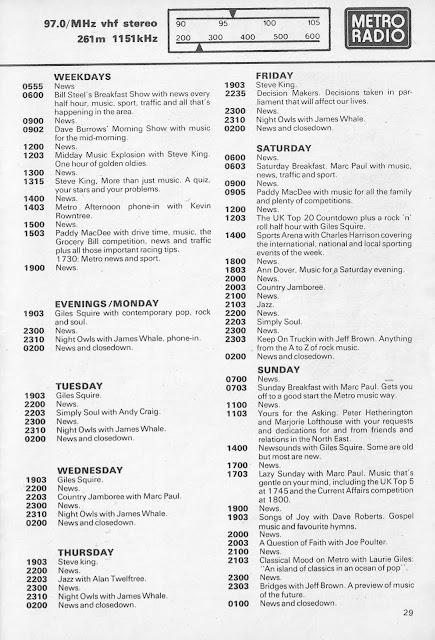 James Whale started in radio at Top Shop in Oxford Circus before joining Metro as an announcer and presenter of a late-night show. Night Owls was a mixture of music and phone-ins. Back then he had already developed his acerbic style and was often criticised for cutting listeners off before they had finished.  Whilst working at Radio Aire in the 80s James was also entertaining late night viewers on YTV with a tv version of his radio show – ideal post-pub entertainment – here’s a clip from one such programme:


After his sacking from TalkSport three years ago James Whale now hosts a daily show on LBC and often reviews the newspapers on Sky News. 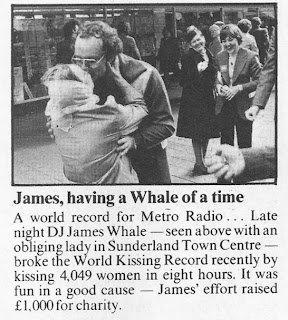 Giles Squire was another DJ to come to ILR by the United Biscuits Network route working under programme director Neil Spence. After some freelance work for Capital Giles joined Metro Radio, he also did the odd spot of continuity announcing on Tyne-Tees.
Bill Steel was an ex.Thames, Tyne-Tees and Border television announcer and commercials voice-over artiste who was brought in as part of the schedule shake-up in 1975. At the time he was on Metro he was also hosting Tyne-Tees evening news show Northern Life. Later Bill worked at Century FM and Real Radio.
Metro’s Drivetime presenter at this time was Paddy MacDee. Paddy, real name Patrick McDermott, ran a successful mobile disco in the North East before joining BBC Radio Cleveland in 1973 where his first interview was with non other than Paul McCartney. By 1977 jumped ship to Metro and by 1980 was the Breakfast show DJ. In the mid-80s he returned to BBC Newcastle where he’s been ever since. These days you can hear him every weekday evening and on Sunday with Solid Gold Hits.
Presenting the Midday Music Explosion was Steve King. Reverting back to his real name of Steve Wells he subsequently worked at Capital Gold, Piccadilly, Smooth Radio and Real Radio.
The Sunday request show Yours for the Asking was co-hosted by Marjorie Lofthouse, Marjorie started her broadcasting career working part-time on educational programmes for BBC Radio Durham whilst also teaching at a Newcastle comprehensive. She left teaching in the mid-70s and went on to a wide variety of programmes – HTV afternoon magazine show Here Today, BBC1’s Pebble Mill at One, Woman’s Hour and various documentaries on Radio 4, the series Romantic Strings on Radio 2 and Business on the Move on Radio 5.
This is the station information published in January 1978: 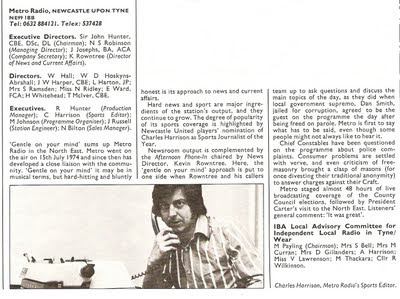 I remember Bill Steel as presenter on Tyne Tees well into the 1980s, would be fascinating to hear his radio work...

The sports programmes talk about covering Middlesborough F.C... wonder how Radio Tees felt about that one!

James Whale opening the lines at 3am on New Year's Morning - can only hope the delay was working...

...And Ann Dover? Surely not her real name!

Another familiar name in the 1977 presenting rota is Andy Craig, who went on to present Central News in Nottingham, and later Meridian News in Maidstone.

Does anyone know if the Jeff Brown mentioned in the listings is the same who now works for BBC Look North Newcastle?