Motoring and the Motorist 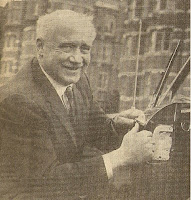 Long before Clarkson, May and Hammond’s escapades on Top Gear the country’s car advice came from a former engineer and member of the Institute of Advanced Motorists, Bill Hartley.

For sixteen years Bill Hartley was the main presenter of the BBC radio magazine programme Motoring and the Motorist, a “weekly survey of the world of motoring”. The programme, which by the mid-60s was attracting an audience of nearly one million, covered ordinary motoring topics, “the everyday problems we all have to face. We leave to others the competitive motoring sports, the cult of the veteran car and the specialized technical developments”.

Motoring and the Motorist started on the Midland Home Service on 6 January 1953, initially produced by the grandly named Horace Saunders-Jacobs. It was transmitted nationally on Friday evenings on the Third Network from 11 October 1957 with, from about 1960, a Saturday repeat on the Home Service. David Glencross produced the show for a while; he would eventually become a chief officer at the IBA/ITC. When David left Birmingham production duties fell to Jim Prestridge, a regular contributor to the series and a Midland region talks producer who, on the retirement of Bill Hartley in late 1969, became the main presenter for the remainder of its run. 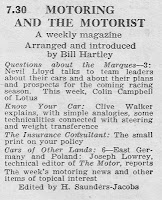 The series had its genesis in an earlier 1946 programme called How’s Your Car? The BBC’s Talks Department had wanted a series to help motorists keep their cars going at a time when there were few new models and garage services were limited. The idea had come from Bill Hartley and Bob Horsley, two motor industry experts but with no broadcasting experience.

It was Bill Hartley’s idea to proceed with Motoring and the Motorist. He would edit and introduce each programme and interview many of the contributors Bill was born 29 August 1911 and educated at Dauntsey’s School, Wiltshire. He joined the Daimler Company at their London works in 1929 and stayed there 21 years mainly working in the experimental and development department. During the war he acted as the company’s Army liaison officer. Bill resigned from Daimler in 1950 to become a full-time motoring writer and broadcaster. He wrote for the Illustrated London News, Practical Motorist, Reader’s Digest and the AA’s Drive magazine as well as authoring the Owner-Driver handbooks for many popular cars. He broadcast on motoring matters for the Central Office of Information, was a BBC motor racing commentator and, from 1957, one of the newsreaders on the Midland regional television service alongside Edmund Marshall and Anthony Raymont. Bill Hartley died in Devon on 19 February 1970. 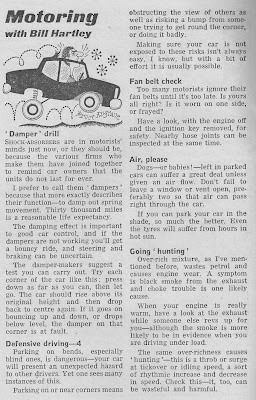 For two years between 1967 and 1969 Bill had a motoring column in the Radio Times in a new ‘lifestyle’ supplement alongside Percy Thrower’s gardening tips and Zena Skinner’s recipes. It was all very practical advice on driving technique, planning your journey and simple mechanical guidance: “how long is it since you looked carefully at all those water hose joints around your engine? Probably a long time.” 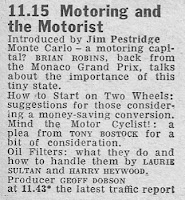 Motoring and the Motorist transferred to Radio 4 in 1967 and, following a major schedule shake-up across all the networks, moved to Sunday lunchtimes on 5 April 1970. Its final outing, with Jim Prestridge still presenting, was on 26 June 1977. In its place, though now moved to 18.30 on a Friday, was Going Places. Its brief was wider, looking at travel, transport policy and holidays and to prove the point its first presenter was ‘everyman’ Barry Norman. Barry was succeeded by Richard Hudson-Evans who, like Bill Hartley, had worked in the motor industry and wrote, and continues to write, for motoring journals.

By now practical car advice was on offer on the BBC’s Top Gear television series, long before its subsequent boy racer incarnation. Like Motoring and the Motorist this originated from the BBC in Birmingham (though the programme had moved to London in 1963), presumably something to do with the proximity to the UK’s then car industry. Top Gear’s pedigree itself can be traced back to ITV’s Drive-In (1971-78) with Shaw Taylor, BBC2’s Wheelbase (1964-75) and, of course, to Motoring and the Motorist (1953-77).

This is the third of six summer posts on travel and transport.

Edit 19.11.12: Thank you to the Hartley family who got back to me about this post (see comments below). I am happy to correct the fact that Bill Hartley didn't retire in 1969 but, at the time of his death in 1970, was still working on the programme.

Very excited to find this, thanks for writing it. Bill Hartley was my grandfather. Never met him, he died a couple of years before I was born, but he's remember fondly in the family. Passed this onto my Dad who's come back with some more info and some minor corrections - I'll leave it in his words;

"Thanks very much for finding this. He is wrong in saying that Dad retired in late 1969. He did not retire and the episode that he had recorded but had not been transmitted before he died was broadcast, with our permission, at the usual time starting with a tribute from the Minister of Transport highlighting Dad's work on road safety. We did have a copy of the recording but I have no idea where it is now. Would you like to pass this correction onto Radio Jottings.

I remember the Clive Walker mentioned in the first clip in the jottings, he had owned the Daimler garage in Cheltenham and I seam to remember drove a white Daimler Dart. He also rode horses and gave me some driving practice while I was learning to drive. I remember Jim Prestridge being very large, I think because after suffering near starvation in a Japanese prisoner of war camp he always ate a lot. I was actually sitting in the back of the car while Dad was taking his Advanced Driving Test."

Hope that's useful, and thanks again for writing about him. I think he was a little more austere than the Top Gear presenters, but he was among the first of that genre.