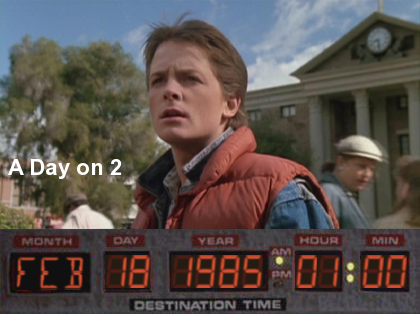 
Imagine being able to fashion a radio time-travelling device that can receive your favourite show from the past or being able to listen again to an historic broadcast (and no I’m not talking about 4 Extra!)
OK, so it probably wouldn’t be BBC Radio 2 on 18 February 1985. As far as I know nothing earth-shatteringly significant happened that day. But, for no real apparent reason, thirty years ago I decided to stick some tapes in my cassette recorder and capture that days output, well a large chunk of it.


This is your chance to hear again how the station sounded in the mid-80s, from Night Ride to Round Midnight, stopping off at the JY show, John Dunn’s Mystery Voice and all points in between.  Here's a quick rundown of the day in jingle form and the full Radio Times schedule.

These are the technical bits: I’m posting the clips on my YouTube channel just to ensure a wider audience. I’ve chopped out most of the commercial music tracks in order to avoid any copyright notices. So far this seems to have worked, though for some reason listeners in Germany may not be able to hear all the programmes, sorry Germany.


I’ll be posting the shows online during the day of the 18 February 2015 at the same time as their original start time – although to avoid staying up all night Peter Dickson and Colin Berry’s show will be available on Tuesday night. Each time a programme is added I’ll update this blog post, send a Tweet and update my Facebook page. All times in GMT of course.
Unfortunately I didn’t record every show that day. So you won’t hear the specialist music shows with Alan Dell and Humph, the mid-afternoon sequence Music All the Way or that evening’s Star Sound Special.  However, elsewhere on this blog you can read about and hear Alan Dell, Humphrey Lyttelton and Music All the Way.  Also the quality of the audio is variable, this is nothing to do with my FM reception at the time but more the fact I used budget tapes.

Kicking things off at 1 a.m. was Peter Dickson with a suitably jokey start to Nightride. Peter took care of the overnight shifts alternating with either Bill Rennells or Charles Nove. Lack of needletime meant we still had doses of the Radio Orchestra, the Brian Lemon Trio and so on. Making the first of two appearances that day is John Fogerty, whose new album Centrefield had just been released, although Peter seems not to know the former lead singer of Creedence Clearwater Revival. There’s a also a talk from Barney Lawrence – anyone know who he is? This kind of (mildly) comical talk was still a feature of Nightride just as they had been on You and the Night and the Music.


Following Nightride was a repeat of the previous day’s Two’s Best with John Dunn, demonstrating that the current overnight repeat policy is nothing new. Sadly I didn’t record this programme.
At the time the king of the early shows was Colin Berry who’d had early starts, on and off, since January 1976. Getting up before dawn every day must have been taking its toll as Colin reports he’s practically wrecked the studio and nearly garrotted himself with his headphone lead. Note also a mention of changes that evening on BBC TV, he’s referring to a new BBC1 globe and the launch of EastEnders. Listen out too for a news summary from David Bellan.

At 6 a.m. enter the still much missed Ray Moore. Ray’s on form this morning, witness that lovely intro into the Shakin’ Stevens track There’s also mention of the announcers over on Radio 3 with Tarmac Rigby and Miss Hughes who’s apparently “gone into tax exile”. Towards the end of this recording catch Bill Rennells voicing a trail for Gloria’s show later that day and her special guest David Cassidy – more on that to follow.

It’s “hello chums” from Ken Bruce on the Radio 2 breakfast show. Perhaps it should have been the Late, Late Breakfast Show as Ken didn’t go on-air until 8.05 am. At the time of this recording he’d been presenting the programme for just six weeks. Punctuating proceedings are Steve Madden reading the news and Pause for Thought with the Rev Roger Royle. Listeners to Radio 2’s current morning output will notice how much calmer it all was thirty years ago; no shouting, no whooping, no laughing acolytes and no-one else to read the traffic news.


The matters on Jimmy Young’s agenda at 10.30 are the Falklands, the miners, school dinners and Winter Fuel Allowances. In this extract he interviews SNP MP Gordon Wilson about his Cold Climate Allowance Bill and Peter Smith of teachers’ union AMMA about school kids supposedly having ‘chips with everything’. In contrast to Jeremy Vine’s show no listeners appeared on the programme to voice their opinions, all the feedback from “the listener” is read out by Jim himself. “Bye for now!”


“Hello there!” It’s amazing to think that Radio 2 took an hour out each lunchtime for David Jacobs to play “our kind of music”. Much as I love the music he played it really did seem like the station was stepping back to the days of the Light Programme, even including a track by Frank Chacksfield, a regular on the Light.

As a reminder that Radio 2 used to have women presenters during the day on weekdays here’s Gloria Hunniford with an edited version of her 90-minute show. Promised guest David Cassidy is a no-show, having backed out at 12 noon due to a “contractual difficulty”, so instead its Bonnie Langford! Glo’s second guest is author John Byrne Cooke, son of Alistair Cooke.


From 3.30 pm it’s as if Radio 2 had a short interlude and put up the audio equivalent of the test card whilst Music All the Way was on. This was a 30-minute sequence of music on record and BBC sessions. I didn’t record the programme for 18 February but you can hear an edition from February 1986 here. Of Music All the Way former Radio 2 presenter and announcer Charles Nove commented: “An odd little duty, that one, which involved heading for one of Broadcasting House's least popular studios (bit of lashup, no windows, dodgy ventilation etc) and doing the live top and tail for this, and playing in the music, ‘supervised’ by the BBC's most panicky producer and a bored engineer. Overmanning? Never!”

In all the recordings so far you’ll have heard very little new music, and certainly nothing that would trouble the charts. That’s why David Hamilton’s show was such a breath of fresh air, and rightly dubbed “the music show”. There’s also plenty of listener interaction and prizes available in The Music Game and Spot the Intro.


The reigning monarch of drivetime for an eon was John Dunn. The show’s mix of music, topical interviews and a quiz – in this case the long-running Mystery Voice competition – is still the template for today’s Radio 2 offering. Providing the programme rundown at the end of this recording is John Marsh.

There are no recordings of Alan Dell’s double bill of the Dance Band Days and the Big Band Era but you can hear other editions here. Nor did I tape Humphrey Lyttelton with The Best of Jazz but there’s plenty of Humph here. And again I inexplicably failed to record Star Sound Special in which John Benson featured the music of Nelson Riddle. But what you can hear again is the third edition of a new panel game, and the second dose that day of David Hamilton, in Some of These Days. The premise of the programme was to answer questions about news, events, TV shows and music that happened on that day in history. On the panel are Peter Jones, Sheila Tracy, Fiona Fullerton and Barry Cryer.

Closing proceedings for the day is Brian Matthew with the daily arts and music show Round Midnight, at this point more than halfway through its 12 year run.  Brian’s guests are Patrick Marr and James Roose-Evans talking about the revival of George Axelrod’s play The Seven Year Itch and author Nickolai Tolstoy plugging his latest book The Quest for Merlin.

Can't tell you how much I've enjoyed listening to these clips today. I used to listen to all these shows. Somehow Radio 2 just isn't the same today. I particularly miss Ray Moore, Terry Wogan at Breakfast and John Dunn. Thanks, Andy, for all the hard work you must have put in to making these available. It is very much appreciated.

Well done on a mammoth project. It put today's Radio 2 into sharper focus.

Gloria Hunniford was a much better presenter than the women they use now. But forget the BBC's obsession with gender misbalance now, why does it not have MATURE presenters like Ray Moore, Colin Berry and David Hamilton now?

The JAM jingles are far superior to the over-produced little 'songs' they use now.

Thank you for your feedback Dave and Len.

Len, in terms of mature broadcasters then purely based on age Ken Bruce, Steve Wright and Simon Mayo are now all older than Ray Moore was at the time I made that recording. I suspect you're talking more about their attitude and approach to broadcasting.
As for the JAM jingles, well you're kicking into a open goal there, they are fantastic.

Andy - yes you focussed my point (I was up early today!)

The bottom line is surely Ken Bruce, Steve Wright Simon Mayo (and even ageing Chris Evans) don't LIKE much of the noisier modern stuff they have to play. Or having to talk with a fawning travel 'girl'. And yes I mean 'girl' as they are clearly chosen for their ability to vocally 'decorate' the dj's shows + add to the BBC's obsession with 'gender balance'!

The DJ's should read the travel news = cheaper faster/clearer!

If Ofcom/commercial radio was doing its job properly rather than just aiming at under-30s, Radio 2 would have about 5 million LESS listeners.

Really enjoyed this collection of audio memories. Thank you.

What a fun trip down memory lane. Thanks for this. Sounds of my teen years (Radio 1 was only allowed during the Sunday evening chart show, or in my bedroom, with the door firmly closed!).