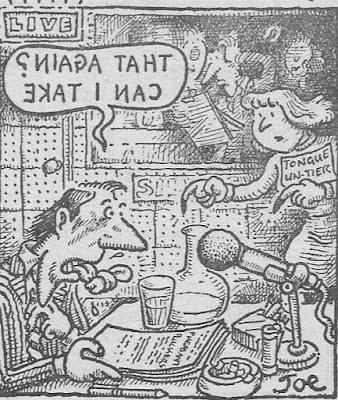 Radio's equivalent of It'll Be Alright on the Night was Can I Take That Again? but in place of Denis Norden and his clipboard was Jonathan Hewat armed, presumably, with a chinagraph pencil and a razor blade.

Hewat had already been broadcasting on BBC Radio Bristol and gradually accumulating tapes of out-takes and mistakes (hence the large number of local radio shows that feature in the clips) before he took the idea to Radio 2. Six series of Can I Take That Again? ran between 1982 and 1989. After that there were occasional programmes on Radio 4 titled Bloopers and he put together short features for Radio 2's late night shows presented by Ken Bruce (1990) and Chris Stuart (1991).

In 1986, ahead of the fourth series, he spoke to David Gillard of the Radio Times who reported: "Whether it's a fouled-up weather forecast, a fluffed song, a bungled sports commentary or a tongue-twisted news item, Jonathan iis likely to have it in his personal collection of more than 2,000 bloopers from all over the world. This time he's delving back as far as 1935 for classic clangers, as well as including some of his own on-air slip-ups.

"I'm not in the business of putting people down, and I avoid naming them whenever possible. But bloopers have become a very popular new kind of humour and most people take their mistakes in good part. I've only been asked once not to use a clip again and, no, I'm not naming the person."

Whilst continuing to appear on BBC radio Jonathan was a senior lecturer in communications at Bristol University before taking up the post of Head of Radio at the University of the West of England to lecture in Broadcast Journalism. From 1990 he taught at the Ashbridge Management College and went on to run his own media training business 46 Design.

I'll be uploading 21 editions of Can I Take That Again? as and when I get the opportunity. But the first series of five is online now under this YouTube playlist.

Series details, and my recordings, are as follows:

Ooo, anything Radio Norfolk in any of them, do you know?

Not sure Paul. I've still to listen to them all again and then put them online. If I spot anything (though he didn't necessarily name check the actual station) I'll email you.

Thanks Andy, Enjoyed these a lot. Especially the school or kindergarten looking for a "100"...