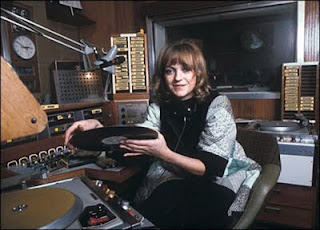 This Friday BBC Four celebrates the career of Radio 1 DJ Anne Nightingale in Annie Nightingale-Bird on the Wireless. She’s still broadcasting every week, though you have to look hard to find her, tucked away at 2 a.m. on a Friday morning.

Anne started as a journalist in the early 1960s working for the Brighton & Hove Gazette and the Brighton Evening Argus. In 1964 she wrote a book, in collaboration with the Hollies, called How to Run A Pop Group. “It didn’t sell” she told David Rider in 1977, “but it taught me about economics in music and publishing”. Her research for the book including rehearsing and singing with a group and she ended up on tour with the Kinks, the Hollies, the Dave Clark Five and Mark Wynter.

In 1964/5 Anne was on TV co-hosting Rediffusion’s That’s For Me, a “lost” episode of which turned up in the treasure trove of recordings made by Bob Monkhouse. She was also appeared on Juke Box Jury and A Whole Scene Going.

Eventually radio work came along, doing short news pieces and interviews for Today, Woman’s Hour, Scene and Heard and a magazine programme called Pop Inside. Her only work as a radio DJ was a short stint on Luxembourg before she joined Radio 1 in 1969, and not 1970 as is often claimed. Radio 1 was trying out a number of new voices in a Sunday night slot and Anne got her chance on air that October.

In 1970 Anne joined the rota of DJs presenting What’s New reviewing “the week’s new pop record releases” – new releases not counting against the needletime allocation. Anne was also a regular on Sounds of the 70s working on the review programme alongside Alan Black. At the same time she continued her journalism work writing for Cosmopolitan, 19 and the Daily Express. My wife Val remembers reading her regular column in Honey magazine.

From September 1975 Anne started her first stint on a request show, taking over the 3-5 p.m. Sunday afternoon slot from The Dave Lee Travis Request Show to host The W1A 4WW Show – the title taken from Radio 1’s then postcode, no texts or emails in those days. This is when I first heard Anne. Like many at school or college at that time on a Sunday afternoon I’d be perhaps doing my homework, or more likely thinking about doing my homework, with the Request Show on in the background.

Within a year the programme became known as The Anne Nightingale Request Show and it continued until 1979. By then Anne had also joined Bob Harris and co. on BBC2’s The Old Grey Whistle Test and was presenting a new weekly Wednesday evening show called Radio 1 Mailbag – this ran until 1983 and in later series she was joined by co-host Adrian Love. As well as Mailbag there was also, between 1979 and 1981, a Friday night show that kicked off just after Roundtable.

By the late 70s Anne was still the only woman DJ at Radio 1. “People are always asking me what it’s like being a woman DJ, which is pretty silly. I think the main thing I have going for me is my voice, which is probably as near to a classless accent as you can get. I’m sure it was a lot plumier when I left school”. In 1977 she spoke about this with Radio Humberside’s Tim Jibson.

And so to 1982. Sunday night after the charts The Anne Nightingale Request Show starts its 12 year run. A programme remembered for championing new bands, delighting in the obscure and, perhaps most famously, for its succinct opening word from Anne – “Hi!” – just before the vocals of the first track. But it was not always thus. Here’s a clip from 1984 with Anne in a jokey handover with Top 40 host Richard Skinner and a decidedly pop playlist.

From 14 April 1985 here's the "effervescent" Anne playing Queen, Howard Jones and The Vapors.
 
Fast forward ten years. By now Anne was occupying the wee small hours of a Saturday night/Sunday morning with The Chill Out Zone, a mix of hip hop, drum ‘n’ bass and ambient sounds – perfect for returning clubbers. This clip is from January 1995.

Though the day and time have changed over the intervening years Anne, now billed as Annie, Nightingale continues to broadcast overnight on Radio1 each week featuring breakbeat, grime, dubstep and other musical genres and fashions that mean little to me. But there she is, after more than 40 years still at the cutting edge, still with a dedicated young following – the queen of Radio 1.

Have great memories of listening to Annie's show on a Sunday Evening in the mid 80s. Brilliant show and brilliant deejay - I'll be tuning in to this!