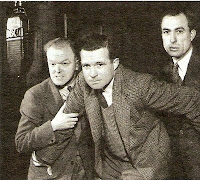 Before Bond there was Barton. But not for Barton the playboy image and licence to kill; his was a Boy’s Own Adventure world with only “clean socks to the jaw” for some fiendish foreign-accented enemy.
For a few brief years Dick Barton Special Agent offered listeners an exciting daily adventure in that drab post-war era, presented at breakneck speed each weekday evening on the Light Programme.
The original Dick Barton series ran from 1946 to 1951 until he met his final match, that of Doris and Dan Archer! Inevitably most of those programmes no longer exist on tape and the best remembered feature is surely the theme Devil’s Gallop, still used to this day by tv and radio producers to evoke that immediate post-war period or accompany a chase sequence.
The series soon became a favourite with schoolboys seeking the kind of thrills they would’ve found in the comic books of the time – you may recall the Ealing film Hue and Cry. Acknowledging this younger audience Barton’s image was cleaned up – no smoking or drinking (only his enemies touched alcohol) and his girlfriend, Jean Hunter, was written out.
Mind you Captain Barton lived something of a lie, he wasn’t really a ‘special agent’ at all. A Military Cross winner during WWII he was demobbed and decided to set up as an enquiry agent or private detective.  Before he was “Dick” he was a “Bill” and the writers had a long list of names for our hero that they rejected – Peter Drake, Rex Drake, Michael Drake, Peter Fenton, Peter Grant, Rex Barton, Roger Barton and Peter Barton
Just like Bond, Dick Barton had a revival, in this case in 1972 as part of the BBC’s 50th anniversary (see Radio Times article below). And despite the fact that so little of Barton exists in the archives the BBC continues to produce documentaries about the programme. Last year for instance Alexander Armstrong examined the popularity of the series in Dick Barton: A Very Special Agent. That programme used interviews from two previous Radio 4 documentaries first broadcast in 1982 and 1990 that I’ll feature this week and next. 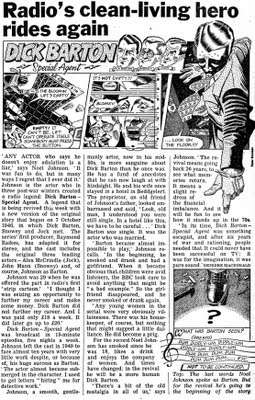 Dick Barton made the news earlier this year when a cache of Australian re-recordings of the original series was discovered; these are now being issued on the AudioGo label. Here’s how the news was broken on the PM programme with Eddie Mair back in February.
PM 15 Feb 2011


In this post I’m recalling the 1990 programme Still A Special Agent in which John Hosken talks to the three actors that played the title role – Noel Johnson, Duncan Carse and Gordon Davies – as well as Alex McCrindle who played henchman Jock Anderson and fan and Barton archivist Pat Hetherington.  This programme was broadcast on 14 February 1990.
Still A Special Agent

Next week Dick Barton, Paul Temple, PC Archibald Berkeley-Willoughby and The Man in Black. In the meantime you can read more here.
Thanks to Andy Howells for the Radio Times scan and information from the Dick Barton Annual.
Posted by Andy Walmsley at 18:04