Down Your Local - Pennine Radio

This is the fourteenth post in a series looking at the original nineteen ILR stations. This week Pennine Radio.
Airdate: 16 September 1975
Still on air?: No, rebranded as The Pulse in 1991.
There’s a bit of friendly rivalry between the cities of Leeds and Bradford but it was the latter that got the first ILR station when Pennine went on air in 1975, probably because the BBC already had studios in Leeds. Radio Aire did launch in 1981.
Here’s the Radio Guide programme listings published in December 1977: 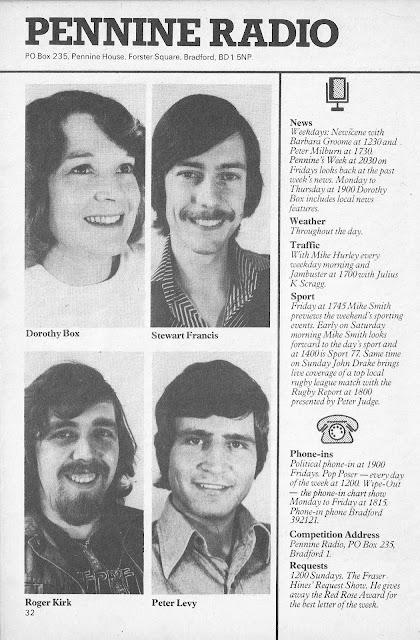 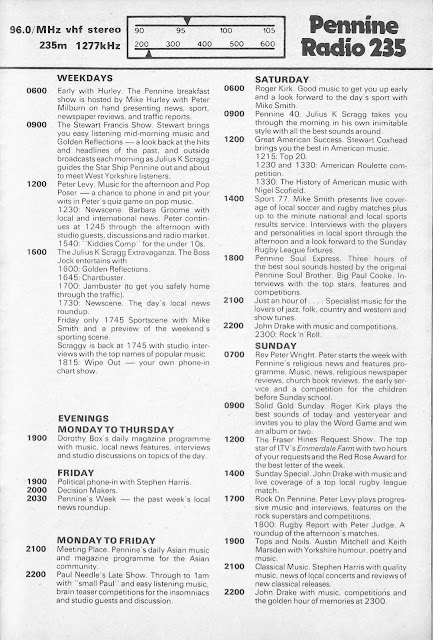 Viewers of Look North from Hull will recognise the photo bottom right of a young Peter Levy. Peter is still broadcasting on the radio every day in almost the same time slot as 34 years ago between noon and 2 p.m. on Radio Humberside.
In fact Peter Levy started his career as an actor appearing in programmes such as Dixon of Dock Green, Comedy Playhouse and The Mike Yarwood Show. Pennine was his first radio job but he has been on air in the North ever since, presenting City Extra at Liverpool’s Radio City and then moving to Radio Aire and BBC Radio Leeds. Whilst at Leeds he started doing the odd bulletin for Look North, eventually becoming a full-time presenter.
Presenting Pennine’s Breakfast Show Early with Hurley was Mike Hurley. Mike joined the station form a Leeds advertising agency. But he became best known for his show Hurley Burley, first on Radio Aire and then for many years on BBC Radio Humberside. His most famous invention was Bill Bore, “the archetypal, flat capped, opinionated Yorkshireman.” Mike went on to win a Sony Award for his show and combined his broadcasting with advertising voiceover work. He died in 2008.
Stewart Francis was a club DJ who took a turn on pirate radio and at Radio 1 before moving to LBC to host Nightline. He recalls how, whilst covering the University Boat Race for IRN, his boat was rammed by a BBC TV launch and Stewart dropped his microphone into the Thames. He was a presenter and programme supervisor at Pennine and later was managing director at KL.FM 96.7 in Kings Lynn.
Roger Kirk had been a technical operator at Radio 1 and did get one of the many try-out slots they had in the early 70s but didn’t get a regular programme. Moving to Radio Nordsee International he managed just one show before sea sickness forced him to work back on the mainland over in Holland. He joined Capital Radio as an engineer when it started in 1973 before moving up to Bradford. Later he was on Hallam, Viking, Classic Gold, Stray FM and Magic 828. Roger died in 2001.
Further information about four Pennine broadcasters has so far eluded me. I can find out nothing about Julius K Scragg other than his real name was Jack Maher and nothing too about Dorothy Box, Paul Needle and John Drake. If you know anything about these presenters please contact me.
The Fraser Hines Request Show was a Sunday lunchtime fixture. Fraser had been playing Joe Sugden on YTV’s Emmerdale Farm since ’72 and was well-known prior to that as Doctor Who’s sidekick Jamie.
Sunday evenings brought Tops and Noils with Austin Mitchell and Keith Marsden, a programme of “Yorkshire humour, poetry and music”. Austin was well known to Yorkshire folk as one of the presenters on the ITV regional news magazine Calendar and from 1977 he became the MP for Great Grimsby. Incidentally ‘tops’ and ‘noils’ are terms used in the spinning industry, so important to Bradford’s industrial growth.
This is the station information published in January 1978: 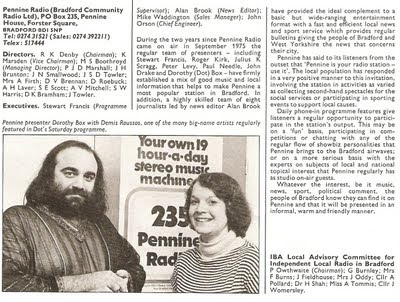 That Frazer Hines show is clearly modelled on Gerald Harper's efforts on Capital. Frazer later turned up, doing a 1 hour weekly spot on Radio Aire in the early nineteen eighties, which lasted months at most.

Mike Smith joined Radio Aire in 81 as their first sports editor, and Yorkshiremen and women may remember him on TV as host of Pro-Celebrity Ten Pin Bowling (I kid you not) on YTV. Not to be confused with the other Mike Smith, who also worked at YTV hosting DIY programmes, or the other other one we're all familiar with!

Note that the hour devoted to Meeting Place means the other some other specialist slots reduced to just one hour a month on Saturdays. Meeting Place stayed, moving around the schedule anywhere from 7 pm to 9.30 pm, until it was shunted to medium wave with the launch of Classic Gold, and presumably killed when Bradford City Radio (later Sunrise) launched.

You mention Roger Kirk, Mike Hurley, and Peter Levy as also working at Aire/Magic 828. There was quite a bit of cross-county traffic, including Richard James (who also popped up at Home 107.9 in Huddersfield as PC), Martin Kelner (who did lunchtime on Pennine after he and Andy Kershaw were disposed of when Aire was really struggling in 1983), and Ross Dickinson, who finished at Aire at 7pm on a Friday and was on Pennine at 9 the next morning! Ross was also on Home, doing a bizarre voice tracked drive time show for a while.

Peter Levy as the voice of progressive rock sounds an interesting proposition! Perhaps he was a die-hard Frampton fan all along, although at Aire, he was very much cast as the housewives' favourite, and had an Album Show which was heavy on Streisand, Manilow, etc.

Finally, Radio Active fans will wonder if Sunday's vicar is in any way related to the Right Reverend Reverend Wright?

The Frazer Hines/Gerald Harper connection had occurred to me too. Gerald did a similar show on Radio 2 also, as did Sacha Distel.
I recall the DIY Mike Smith from daytime telly in the Yorkshire region.
Funny you should mention the Right Reverend Reverend Wright - watch out for a post this coming Monday.

Dorothy Box married and became Dorothy Farell and was living in Pudsey and was working at Leeds University the last time I spoke to her.

Paul Needle was a curate at Pudsey Parish Church and did weekly religious programming on Radio Leeds, then Pennine Radio, then Radio Aire.

Backroom sports staff at Pennine Radio 1975 to 1978 were Keith Giles and Ashley Barker. Ashley Barker was an actor who went on to appear in Coronation Street.

I can give you some information about Julius K Scragg. I have a tape from BBC Radio Manchester 'Baron from the BBC' show from 1975. Julius talked briefly as he was going to do a programme called 'New Voices' at 10pm the same evening. JKS was nervous as it was his first time on radio. Subsequently (as you said) he had a career on Pennine Radio