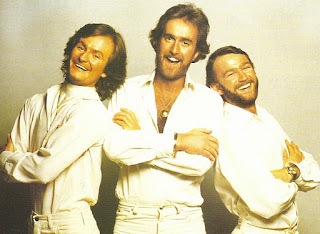 This isn’t a post about the current single by Marina and the Diamonds but Radio Active, Britain’s only national local radio station that was the Radio 4 hit comedy show between 1980 and 1987. This is the programme that introduced us to Mike Channel, Mike Flex, Anna Daptor, Martin Fry, Nigel Pry, The Hee Bee Gee Bees, Sir Norman Tonsil and the rest.

Back in 1987 the third programme in series 3 (God Alone Knows) was broadcast as usual on the Saturday but due to many complaints the Wednesday repeat, and all subsequent repeats, went out in an edited form. Yet again mocking religion got the broadcasters into trouble. 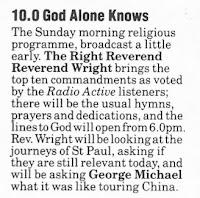 I only became aware of this chapter in Radio Active’s history when  reading on an internet forum that someone was looking for this particular episode. Wikipedia notes the following changes to the original programme:

“…in the broadcast church service near the start of the episode the inability of any of the congregation to recite the Lord’s prayer correctly was replaced with a request for two girls in the front row to turn off their Sony Walkmans. The new translation of the Bible was also heavily edited, the new 10 commandments were changed to remove two which were originally of a sexual nature (replaced by "thou shalt not listen to the Beastie Boys” and "thou shalt not support Arsenal"). A description of the cover was deleted completely. To make up the lost time the preceding article was lengthened with a few extra lines”.

As chance would have it I have that original unexpurgated version and here, for the first time in 24 years, it is:

This post was brought to you by Honest Ron. If you have a complaint please telephone this number:

Thanks for this Andy.