Down Your Local - Radio Tees

This is the twelfth post in a series looking at the original nineteen ILR stations. This week Radio Tees.
Airdate: 24 June 1975
Still on air?: Yes, as TFM Radio

I have a particular soft spot for Radio Tees as it was the only ILR station that I could regularly listen to in the late 70s. Although living in East Yorkshire at the time the signal was sufficiently strong enough for me to listen to Tees, though it did fade in and out depending on the weather conditions.
Opening in 1975 the studios were based in the old water board offices in Dovecot Street, Stockton – looking very similar to the old dock offices that I worked in for the council in Goole.
This is some Tyne Tees footage of the station launch:
And this is how Tees sounded on day one with the Les Ross Breakfast Show complete with market prices, back then it was the meat market rather than the FTSE.
Tees Launch-Les Ross
Here’s the Radio Guide programme listings published in December 1977: 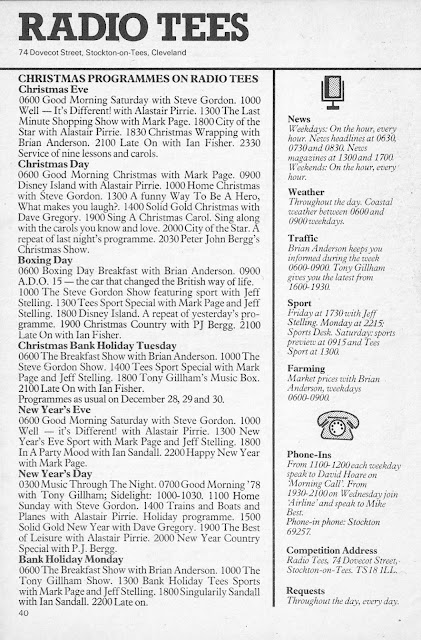 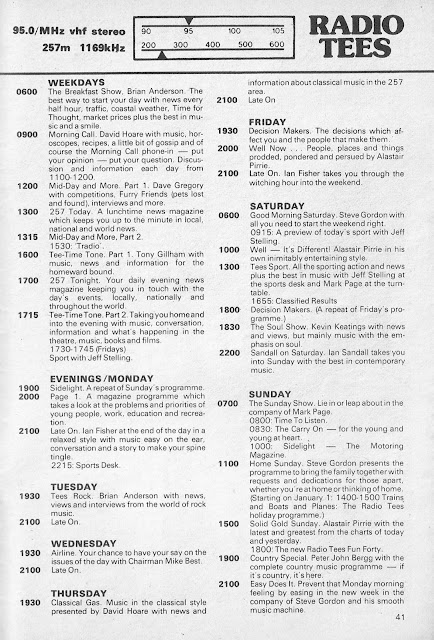 The presenter I remember the most is Dave Gregory who was, it turned out, the most experienced of that Tees team. After a short stint on the pirate Radio Nordsee International he worked for the United Biscuits Network (UBN). This led to an opening at Radio 1 producing on-air promotional material and occasional shows including a Saturday afternoon programme and once standing in for Tony Blackburn on the Breakfast Show. Also at BBC Radio London and on the BFBS he joined Metro Radio in Newcastle when that started in 1974 before hopping across to Stockton the following year. Dave was subsequently at Pennine Radio, Essex Radio, Radio Luxembourg, Invicta Gold, Chiltern Supergold, Choice FM, Jazz FM and LBC. These days he concentrates on advertising voiceovers and occasional stints on Solar Radio.
On The Breakfast Show at this time was Brian Anderson, having taken over from Les Ross who’d gone back to the Midlands to join BRMB. Brian had briefly been as Radio Caroline before joining Tees where he would become Head of Music. In 1981 he moved to Scotland where he has been ever since, firstly as presenter and Head of Programmes on Moray Firth Radio and then running Window Communications Ltd making programmes for China, Vietnam and Mongolia. He now runs a video production company.
On Morning Call was David Hoare. David had gained his on-air experience when aged just 15 with the Gibraltar Broadcasting Corporation before coming to the UK and working at BBC Radio Birmingham hosting their early morning show On the Move. He joined Radio Tees when it started and on leaving went back to the GBC and was also ordained as a minister of the Church of England. The Reverend David Hoare makes occasional broadcasts on Radio Gibraltar.

Tea-Time Tone was none other than Tony Gillham (left), another UBN recruit. Prior to that Tony had DJ’d on the continent and freelanced as a BBC announcer. Thereafter, like Dave Gregory, he was something of a radio nomad: Orwell, Mercia Sound, Chiltern, Radio 2 (on the weekend Early Show), Radio Broadland, BBC Radio Bedfordshire, Brunel Radio in Swindon, Programme Controller for the Classic Gold Network, BBC Radios Oxford, Northampton, Devon and Jersey. Tony is still on air each Saturday with Gillham Gold on BBC Radio Cambridgeshire as well as running a community station in St Neots, Black Cat Radio.
In charge of the newsroom and hosting the weekly phone-in Airline was Mike Best, who'd succeeded Bill Hamilton as News Editor. Mike had started as a reporter on the Newcastle Journal before moving into local radio at Radio Durham, Leeds and Carlisle plus an attachment to the Today programme. He was at Tees for four years before helping to set up the news operation at Radio Aire. At Yorkshire Television from 1982 he worked his way up from News Editor to Director of Broadcasting. Mike now runs his own media company BestMedia and lectures in Broadcast Journalism in York and Leeds.
Other members of the news team I recall from this time are Kent Barker, Diana Goodman and Lee Peck. After working for BBC radio and TV news and for ITN, Kent now runs his own production company. Diana became the BBC’s first female foreign correspondent with postings in Bonn, Berlin and Moscow. Lee went to work for Radio Trent and was then one of the co-presenters of the TV show Game for a Laugh. After that I’m not sure what happened to him.
Alastair Pirrie was at Tees for a while and is mainly remembered for Pirrie PM but his ambitions lay in television. He had worked at BBC Radio Cleveland and on Radio 2 devised and presented Gospel Road a Sunday morning broadcast in 1974. On BBC TV he presented Parents and Children and See You Sunday. For the local Tyne Tees station he was on Saturday Shake-Up, a children’s Saturday morning show with Christine Anderson; Razzamataz, where one of the young co-hosts was Lisa Stansfield; Lynn’s Look-In and moving into directing/production on the short-lived pop show The Roxy. You may also remember the early 80s BMX Beat for Border TV which Alastair co-presented. He went on to pursue a career in TV directing, working for a time at Chrysalis TV.
Also now in television is Late On host Ian Fisher. Leaving Tees he moved across to Carlisle to work at Border TV as a continuity announcer and then producer and director mainly of science documentaries. He was in the news in 2009 when his company Creative Imagineers Ltd was reported to have bought the name ‘Border Television’ following the merger of that station with Tyne Tees.
At the weekend on Tees you could hear Steve Gordon, who sadly died in a helicopter crash in Ireland, and ‘Me Mark Page’ as he became known.  Mark (real name Mark Gibbon) was something of an early starter: on hospital radio at 14, a junior assistant at Radio Cleveland at 15 before joining Tees aged just 16. He went on to host the Breakfast Show before joining BBC Radio 1where he was on the daily early show and various weekend slots. Moving on to Luxy, back to Cleveland  then, in no particular order BBC Radio Newcastle, Magic 1170, The Pulse, Aire FM, Clyde 1, Real Radio, BFBS, Scot FM and Perth FM. But Mark’s main interest is in Garrison FM, a company he established in 2001 that broadcasts to the British Army bases in the UK. Mark broadcasts on the station every Saturday lunchtime.

I musn’t forget the main sports presenter back in 1977 Jeff Stelling. Jeff is now a very familiar face on TV on Sky’s Soccer Saturday and as the host of Countdown, at least until the end of this year.
Radio Tees hadn’t yet gone 24 hour so we still had a good old-fashioned closedown at midnight and station start-up at 6 a.m. Here’s part of the start-up probably recorded in 1978. I’d always assumed the theme was specially written for the station and it was only years later I discovered that it’s the track Forecast by Eric Gale.
Tees Start-Up 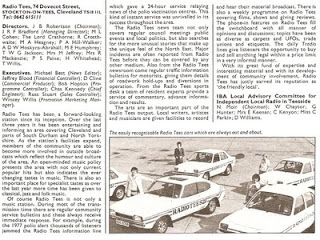 Note the name of one Wincey Willis as Promotion Marketing Manager. Wincey, of course, went on to enjoy a television career on TV-AM and Channel 4’s Treasure Hunt. She currently broadcasts on BBC Hereford and Worcester every Saturday morning.
Web Link
Radio Tees Tribute Site
Posted by Andy Walmsley at 02:00

Lee Peck runs a P.R. company in Hampshire now, and was back on the radio quite recently, giving business updates on the sadly defunct Coast in Southampton.

Robin - 2nd week in a row. Argh! Luckily next week's Radio Trent post is Brian-free. Others that worked in the Tees newsroom and went on to national and international reporting include Peter Bowes, John Andrew, Libby Fawbert, Bill Hamilton, Colin Paterson and Mark Mardell.

I used to walk past the Radio Tees offices every weekend in Dovecot Street Stockton as a child, I remember for many years owning an I Love Radio Tees badge - I don't know what happened to it - we also had a Radio Tees annual from around 1982 which I think my mum might have - I'll have to check that out!

Gone but not forgotten biggest mistake was changing it's name and moving out of dovecot street.

I remember being given a tour of the building by Wincey Willis and meeting Liverpool Express the band in the studio and then to complete the day the band played at the Radio Tees summer music festival held at Club Fiesta...very happy days.