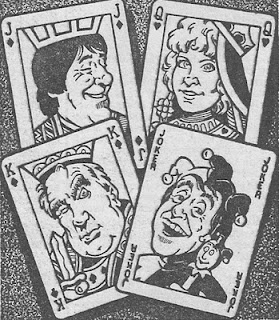 There was a time when most evenings you’d hear a comedy show or quiz on Radio 2 produced by the Radio Light Entertainment department. Nowadays the network considers itself to be much more of a music station and such programming has virtually disappeared.

In fact budget cuts in the early 90s started the fall-off in these shows. Killed off in 1992 were The ABC Quiz, Back to Square One, Beat the Record, The Grumbleweeds, The Law Game, On the Air, Pop Score and Some of These Days. “The shows are expensive in Radio 2 terms and they don’t do very good business” said BBC’s Radio MD David Hatch. “In addition some of these shows have been on longer than they ought to have been. Beat the Record has been running 20 years and The Law Game 15 years.” He went on to say that “there will continue to be light entertainment on Radio 2 with The News Huddlines, cinema programmes and some new shows.”

It seems that Radio 4 Extra, and its predecessor Radio 7, rarely revisit these Radio 2 shows so I thought I’d fill the gap. So in this post I’m recalling one of the network's panel games from the 1980s - Dealing with Daniels. Running from 1982 to 1989 it was yet another creation from the mind of Ian Messiter, he of Just a Minute fame. Hosted by magician Paul Daniels (“you’ll like this…not a lot”) the idea was for the panellist to answer not-too-serious questions from a pack of question cards based on playing cards. So each suite was a different category and each card worth a different number of points, court cards and aces being worth more. If a player asked for a card that had already been drawn they’d get the horn from Mr Daniels. Playing a joker could wipe out any minus points and guessing when all the cards had been used gained you 10 points. Clear?

The first series started on 28 December 1982 with a panel of Barry Cryer, Lorraine Chase and Mathew Kelly, but the series regulars became Patrick Moore and Duggie Brown.

Here’s the first programme of the second series which features Michelle Dotrice alongside Patrick and Duggie. This programme was broadcast at 10 p.m. on Tuesday 29 May 1984.

cock of the north said...

Good man ! I remember all those sbows and many more
I loved Dealing with Daniels and agree with you that 4 extra misses a trick by not playing these. OK, they weren't classic shows but entertaining none the less amd a nice easy listen. Thanks for posting.

cock of the north said...

Good man ! I remember all those sbows and many more
I loved Dealing with Daniels and agree with you that 4 extra misses a trick by not playing these. OK, they weren't classic shows but entertaining none the less amd a nice easy listen. Thanks for posting.