Down Your Local - Plymouth Sound

This is the eleventh post in a series looking at the original nineteen ILR stations. This week Plymouth Sound.
Airdate: 19 May 1975
Still on air?: No – became part of the Heart group in March 2009
The smallest of the first ILR stations Plymouth Sound’s studios were in an old organ factory just outside the city centre. In the early days it became apparent that perhaps the service area was too small as the station rarely made much in the way of a profit, a situation only rectified when it became part of the GWR group in the 80s. Setting up the station was local business man Bob Hussell and in charge of programming was David Bassett, an experienced broadcaster at LBC – indeed for a while he was working at both LBC and Plymouth Sound where, like Keith Skues at Hallam, he was a station controller with a daily show. Later he joined BBC Radio Devon when that first went on air in 1983.
When Plymouth Sound launched the opening announcement was made by nine-year old Andrew Knight whose name was drawn out of the hat on Westward TV. The launch was not the slickest as you'll hear on the YouTube clip below. At the start there were just 24 staff including administration, four in the newsroom and five presenters –Ian Calvert, Carmella McKenzie, Louise Churchill, Colin Bower, Jimmy Constable as well as David Bassett. Apparently the station used to play an unprecedented 1,100 tracks per week. Nowadays a station like Heart would only play about 700 unique tracks in a month.
Here’s the Radio Guide programme listings published in December 1977: 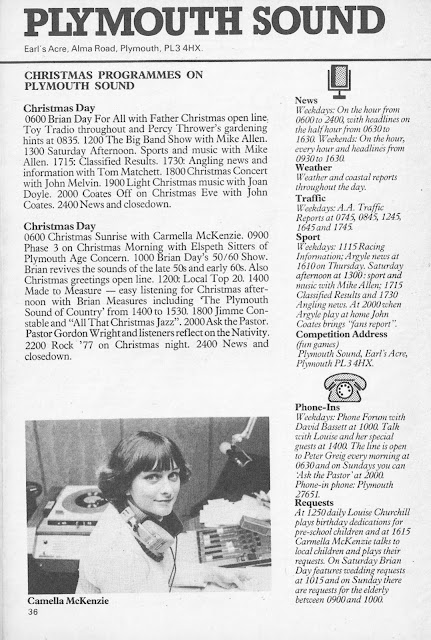 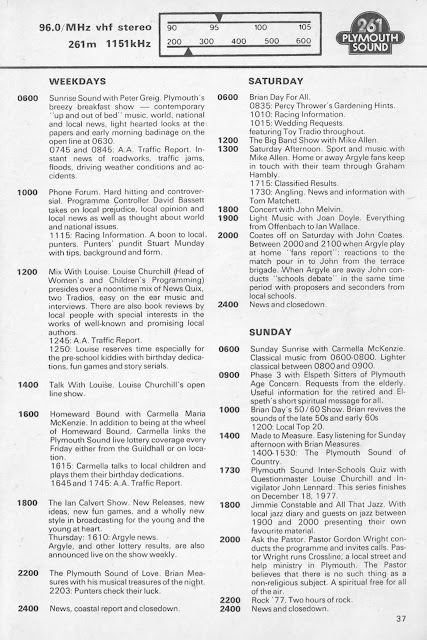 The Sunrise Sound (what a lovely name for the breakfast show) host was Peter Greig. Peter had worked in the motor trade and run a mobile disco before joining the station. He later became Programme Controller and then moved to Radio South Hams. Until earlier this year he was on BBC Radio Devon, seemingly the destiny of many of Plymouth Sound’s early DJs.
After David Bassett’s phone-in it was Mix with Louise followed by Talk with Louise. Louise being Louise Churchill, and yes apparently she was distantly related to Sir Winston. On air for 14 years at Plymouth Sound she went on to became the station director. Back in 1977 she had the title of Head of Women’s and Children’s Programming though the only directly youth-orientated show appears to be the Inter-Schools Quiz on Sunday with “invigilator John Lennard”. Is this the same John Lennard who went on to be a BBC producer or am I getting confused with John Leonard?
Homeward Bound was Carmella McKenzie who had joined Plymouth Sound after working as a technician on the student television service at Plymouth Polytechnic. She’s now a local registrar splitting her time between Cyprus and Plymouth. 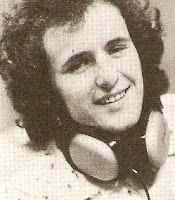 The evening weekday DJ was Ian Calvert (left) who was with the station until 1992. He then hosted the breakfast show on South Hams Radio (now also part of the Heart brand) before moving to BBC Radio Devon. Calvie left the BBC last year to concentrate on his travel business Have A Nice Stay.
The early ILR stations loved their punning programme titles so Brian Measures hosted, of course, Made to Measure on Sunday afternoon as well as the late-night Plymouth Sound of Love. Brians’ route into radio was different to many as he’d been with the GPO and the Royal Mail. Now retired and living in Portugal.
John Melvin who presented the concert on Saturday evening had started at the station as presenter of a weekend forces request show whilst working as a bank official during the week.
This is the station information published in January 1978: 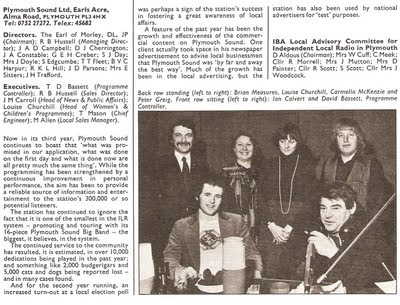 Did GWR have anything to do with Plymouth Sound as early as you say? It wasn't until late 1999 / early 2000 that the station (along with its neighbours Gemini, Orchard and, I think, Lantern) got the GWR treatment, with its FM service becoming Today's Best Mix and AM Classic Gold. I have some 1997 recordings from the station, and it's still remarkably old-school ILR for that late on when so many stations had become part of a few big groups - a sort of contemporary Christian show on Sunday nights called 'Cross Rhythms', which presumably was a more modern equivalent of 'Ask the Pastor', and full election coverage on AM.

Going much further back, I have a recording of their chart show from July 1978, and (a la the BBC with "Wet Dream" and "Give Ireland Back to the Irish") they regarded the very phrase "no-one is innocent" as unfit for broadcast, so refer simply to "a song by the Sex Pistols". Is the Mike Allen listed here the same one who worked for Capital, TalkSport &c? I love the idea of a future pioneer of hip-hop on legal radio playing big band.

Oops on the typos, now corrected - and Brian is my middle name!
An interview with Louise Churchill mentioned that the station became part of the GWR group in 1987.
I did wonder if it was THE Mike Allen, suspect it wasn't but if anyone in the Plymouth area knows otherwise...

That first hour was pretty ropey - up there with Metro's or, more recently, Talk Radio's launch - but Colin Bower and David Bassett do have marvellous radio voices of the kind you rarely hear nowadays - Bassett sounds to me a little like Robin Day.

Having two women presenters hosting daytime shows must have been something of a novelty for the time, indeed I can't imagine it's happened too often in commercial radio since.

Those Saturday airshifts look lengthy - 0600 to 1200, and 1200-1800, in a time before voicetracking. Ouch! Also the Argyle phone in seems to be the precursor to the post-match groan-ins that were to become the bane of local radio some twenty years later.

Note that Sunday's offerings seem aimed almost exclusively at the older crowd, with the exception of the Schools Quiz and Rock Show - almost as if they've morphed into a different station for the day.

Final thoughts - I pity Brian Day having to make a silk purse out of 'Toy Tradio', and I love the disapproving expression Carmella Mackenzie's giving Ian Calvert in the team photo!

Was hoping that the tinternet would have much more archived from the lively memory if Plymouth Sound ..
Happy Days and memories

Was hoping that the tinternet would have much more archived from the lively memory if Plymouth Sound ..
Happy Days and memories