Down You Local - Radio Hallam

This is the eighth post in a series looking at the original nineteen ILR stations. This week Radio Hallam. 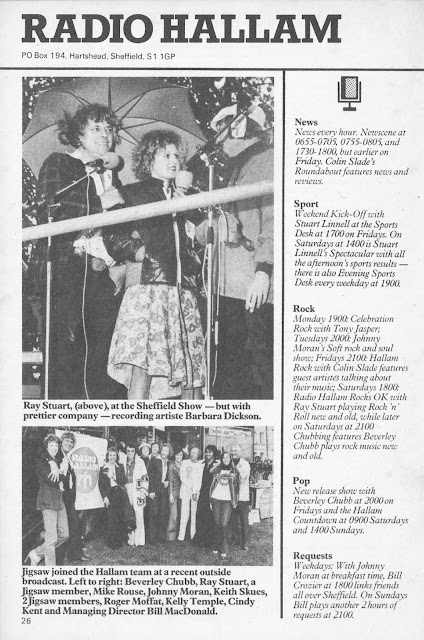 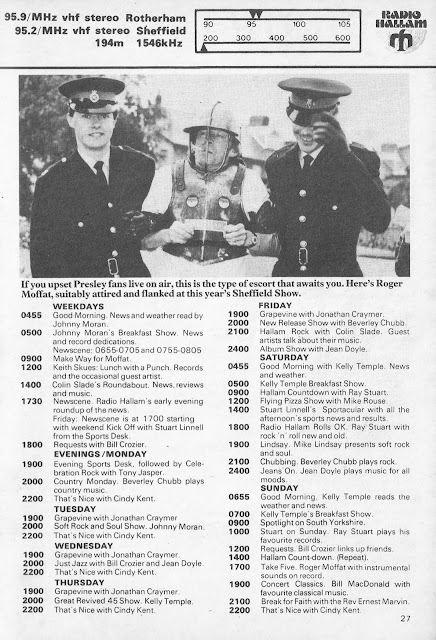 Radio Hallam had a strong contingent of very experienced broadcasters, mostly ex-BBC brought to the station by the first Programme Director, the broadcasting legend that is Keith “Cardboard Shoes” Skues . Keith had a wealth of experience on the British Forces Network (BFN), pirate stations Radio Caroline and Radio London, Radio Luxembourg, the BBC Light Programme, Radio 1, where he presented Saturday Club on day one, and Radio 2 where he was an announcer/newsreader and a regular on Late Night Extra and Night Ride.

Keith Skues was persuaded to join the BFN in Cologne after he had written to the BBC’s Roger Moffat, at that time introducing Make Way for Music with the Northern Dance Orchestra. After going along to see a recording of the show Moffat advised him to write to the BFN. On being called-up he auditioned and was accepted as a presentation assistant where he shadowed Bill Crozier and Derek Hale before producing his first programme, Canteen Break. He was to repay the favours to Roger and Bill when Radio Hallam started.

At Hallam Keith continued as Programme Director and DJ, in 1977 it was Lunch with a Punch, until the early 90s. These days you can still hear him every weekend on BBC local stations in the Eastern counties.

Along with Keith came Johnny Moran “Your More Music Man” who had been at Radio 1 from the launch. Prior to that he had been one of the last old-style staff announcers at Radio Luxembourg.

Bill Crozier was also a very familiar voice on British radio having co-presented Family Favourites with Jean Metcalfe for many years. Bill worked for the British Forces Network in Germany having started there as a producer of Piano Playtime. At Hallam we would have the sound of a nightingale in the background between records, the idea coming from the bird-like “RH” in the station logo. Listeners named the bird, a little unimaginatively, Florence Nightingale.

Another ex-BBC announcer was Roger Moffat who was on the first team at Hallam following his firing from the BBC. He had been at the Beeb from the late 1940s and was the duty announcer who closed the old Light Programme in 1967. Roger was soon getting into bother at Hallam when he was quoted in a newspaper interview as saying that “what a bloody awful place Sheffield is”.

And speaking of BBC announcers when Hallam was launched Radio 4 announcer Peter Donaldson was part of the pre-launch team, though he never made it on the air, before returning to London. Later in the 70s, I’m unsure of the date, Roger Moffat’s old colleague from the Light Programme and Radio 2 Bruce Wyndham  joined the station.

After leaving the RAF in 1959 Ray Stuart was in the bands the Main Liners and then Frankenstein and the Monsters. He then worked as a DJ in the pubs and clubs of Sheffield before working freelance for the BBC local station and then joining Hallam.

Hosting the Saturday afternoon music and spots sequence was Stuart Linnell. Stuart had started at BBC Radio Birmingham and after Hallam has continued to have a long career at various BBC and commercial stations as well as presenting Midlands Today on BBC1 and reporting for Sky Sports. He’s currently on each weekday lunchtime on BBC Radio Northampton.

Finally before we leave Hallam Land there’s the Cliff Richard connection. Hosting the late-night show That’s Nice (how those early ILR stations loved their programme names) was Cindy Kent. Cindy, now the Rev. Kent, had been the lead singer with The Settlers – remember The Lightening Tree? She also worked at LBC and Capital and contributed to programmes on BBC national radio too. Latterly Cindy was a presenter on Premier Christian Radio but here she is back in the 60s singing with Cliff Richard:

The other link to Sir Cliff is Tony Jasper who back in 1977 was on Celebration Rock. Tony was a music author and journalist and wrote a biography about the “Peter Pan of Pop”. Amongst his output was also The Top Twenty Book, the fifth edition of which sits on my bookshelf. Tony now writes for and runs the Jasperian Theatre Company and is a Methodist lay preacher. 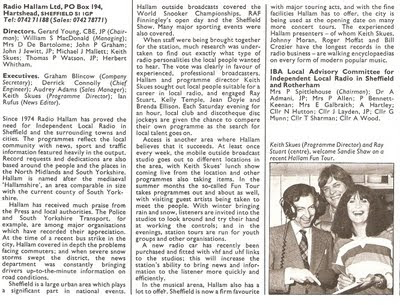 One of the quirks of Hallam (shown in the schedule above) was the news at :55 past the hour - :57 at weekends. Enabling them to be playing music when Radio Sheffield and R2 were breaking for news.

Hallam's breakfast people enjoy unusual longevity: Johnny Moran did eleven years at breakfast on Hallam, but 'Big John' Harrison, the current host, will overtake him if he sees out his present deal.

Hallam loved their charts - at one stage, as well as a four-hour Top 50 Countdown on Friday at 10pm, they had the American chart (presented by Johnny Moran) on Saturday morning 9-12, then a shortened Countdown at midday, not forgetting the Network chart on Sunday!

Thanks for all your comments on recent posts. In my research I didn't find out what had happened to Johnny Moran after he left Hallam.

Really enjoyed reading this article, as I was one of Hallam's biggest fans. I used to listen to Ray Stuart on a Saturday morning from 9am in 1975/76 and jot down the top 40 chart as he played them. I loved listening to Michael Lindsey on a Saturday evening and I remember Mike Rouse and his "Flying Pizza" show, where he would play a "phazer" (two identical records playing at the same time), which would create a strange wooshing sound. I listened to Cindy Kent's late night show, and sent in my choice of tracks like hundreds of others, to spell out the title of her show "That's Nice". She would play the tracks chosen by you during her show. Roger Moffat was just brilliant and so funny and it was very sad when he died in 1986. Kieth Skues, programme controller of Radio Hallam from the start up until about 1987, presented two shows in memory of "Our Rog", following Roger's death, which looked back on his RM's colourful life, and which also included an obituary tape that Roger had recorded prior to his death. I also enjoyed the roadshows and having the opportunity to look round the station in late 1977. Radio Hallam raised alot for charity in it's end of the year 24hr marathon appeal known as "Money Mountain". There would be special items up for auction and the listener could put in a bid and also pledge money for a specific record to be played. Radio Hallam was truly a very special radio station and it captured the hearts of South Yorkshire and the North Midlands, who to this day still remember it with great fondness.
They certainly don't make radio stations like they made "Radio Hallm"!

On the subject of Johnny Moran, I heard he was living in the South of France.

By far the funniest comment from Roger Moffat was after elvis had died . He suggested he should be stuffed and placed in the hallam fm foyer.