Down Your Local - Radio Forth

This is the tenth post in a series looking at the original nineteen ILR stations. This week Radio Forth.
Airdate: 22 January 1975
Still on air?: Yes. The FM service now carries Forth One and the AM is Forth 2.
Here’s the Radio Guide programme listings published in December 1977: 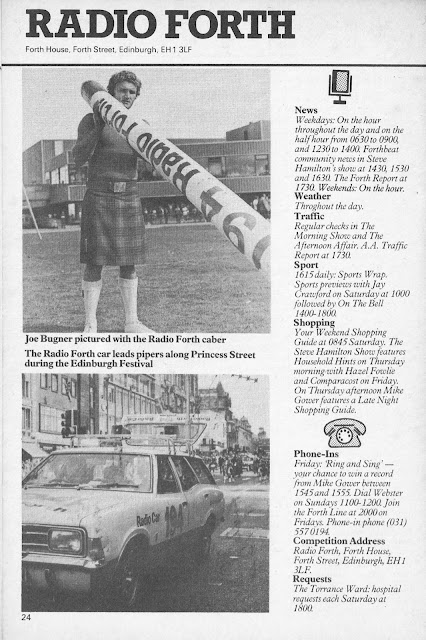 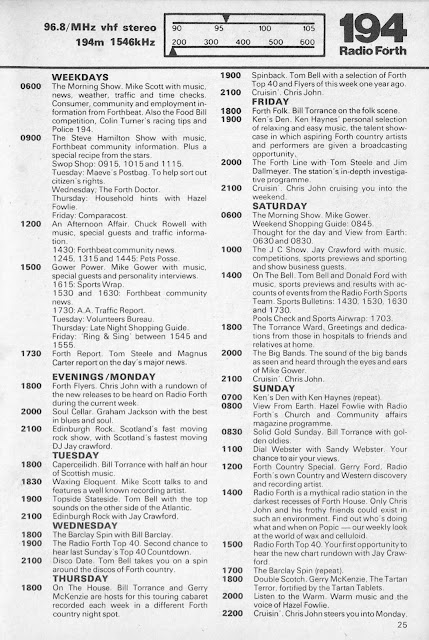 The best known voice on Radio Forth’s 1977 schedule is Steve Hamilton who, some 11 years later provided the voiceover for STV’s Wheel of Fortune with Nicky Campbell as host. Dumfries born Roland James Hamilton (he thought Steve sounded better as a DJ name) studied drama at the Royal Scottish Academy and would later have bit parts in Taggart, Take the High Road and Monarch of the Glen. His was the first voice on air when Radio Forth opened, kicking off with local group Pilot’s hit record January. He remained with the station until 1988 by which time he was also a continuity announcer at STV, making the regular commute between Edinburgh and Glasgow. Later he concentrated on voiceover work and ran a voice coaching school, and was on-air for a while on the short-lived station River FM. Steve died after a heart attack in 2009.
﻿ ﻿﻿ 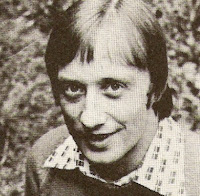 Morning show presenter Mike Scott (left) had started his broadcasting career on the pirate station Radio Scotland in the summer of 1967. Back on the mainland he trained as a printer before returning to radio and joining Forth in 1976. He presented the Breakfast Show for many years and was later Head of Promotions for the Scottish EMAP-owned stations.

Presenting An Afternoon Affair was American DJ Chuck Rowell and, other than the fact he was from the States, that’s all I know about him. If you know more please let me know.
Afternoon host Mike Gower (Gower Power) was a former club and hospital radio DJ. He was at Radio Forth between 1974 and 1979 before moving into television where he was a newsreader on BBC Scotland and then into TV directing mainly in news and sport.
In 1977 Forth still had specialist music programmes such as the Scottish music show Caperceilidh presented by Bill Torrance. Bill was on a number of shows across the week. These days he’s a voiceover artiste but he later became Head of Presentation at Forth, was presenter of the TV programme Beechgrove Garden and DJ’d at Radio Tay and Northsound 2. He’s still on air on Forth 2 every Sunday afternoon.
The daily Forth Reports was co-presented by Tom Steele, the station’s Head of News. Tom had come from Radio Clyde and had been a lobby correspondent for the Scottish Daily Mal, a reporter at BBC Scotland and news producer for BBC Radio Sheffield. He went on to become Programme Director and then Managing Director at Radio Forth. He now runs a media consultancy business.
The other co-host of Forth Reports was Magnus Carter who’d been a journalist on The Evening Chronicle and The Journal in Newcastle before joining Forth. Magnus was later on the AM programme at LBC, worked on Today on Radio 4, was an editor at IRN and Head of News for GWR Radio. Like Tom Steele he now runs a media consultancy and training business.
﻿﻿﻿﻿﻿﻿﻿﻿
Weekend DJ and host of Edinburgh Rock was Jay Crawford. His radio career started at Forth where he stayed for 25 years before moving to Radio Clyde and then Scot FM. He is now Programme Director for Real Radio Scotland and Chair of the Scottish branch of The Radio Academy.
Looking after the community affairs programming was Hazel Fowlie who would later work for Saga Radio until its Smooth rebrand. 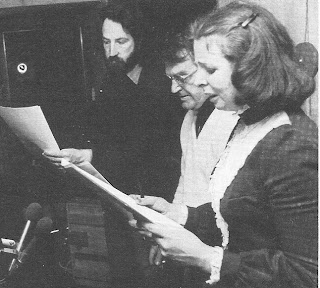 Although not evident from the 1977 schedule Radio Forth had occasional drama series including the long-running Mary Queen of Scots (above).
This is the station information published in January 1978: 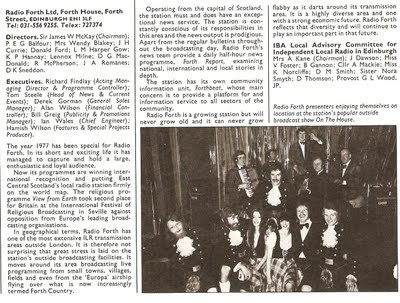