Down Your Local - Radio City

This is the ninth post in a series looking at the original nineteen ILR stations. This week Liverpool’s Radio City.
Airdate: 21 October 1974
Still on air?: Yes, on FM only with the AM service carrying City Talk.
It was Radio City’s first Programme Director Gillian Reynolds that brought together the team that launched the station in 1974. Gillian is best known as a radio critic, having worked for The Guardian before moving back to her home city to set up the station. She returned to journalism in 1975 becoming the Daily Telegraph’s radio critic, a position she still holds. Gillian is also a regular broadcaster, contributing to many programmes on Radio 4 and on Radio 2 - she was heard on Round Midnight, Parkinson’s Sunday Supplement and the Radio 2 Arts Programme.
This is the Radio Guide programme listings published in December 1977: 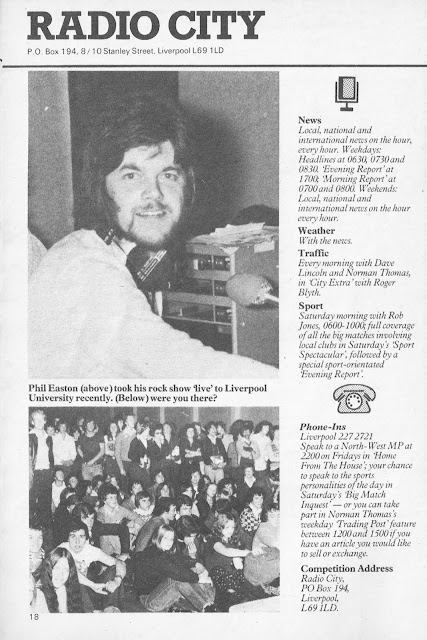 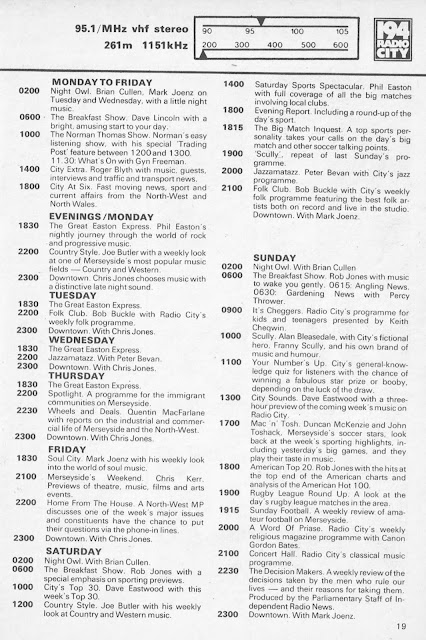 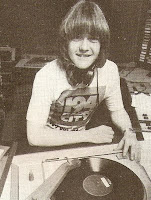 Perhaps the best known name in this schedule is Keith Chegwin with his show It’s Cheggers. Keith was a former child actor in films and TV who had a brief singing career (remember Kenny with The Bump?) before joining City as a young DJ. In 1976 he had already started to appear on BBC1’s Multi-Coloured Swap Swap with Noel Edmonds which ultimately led to Cheggers Plays Pop (BBC1 1978-1986) and working on Radio 1 with Tony Blackburn and Maggie Philbin.
The weekend Breakfast host Rob Jones started training as an accountant before joining Radio City. He left the station to join Radio Luxembourg as DJ and eventually became Director of Programmes. Rob was one of the presenters of ITV show Breakers, brought in as a last-minute replacement for Marc Bolan. After Luxembourg he moved into television working for Sky and Music Box before setting up his company USP Content..
Weekday Breakfast host Dave Lincoln would go on to set up Red Rose Radio in Preston and work for Virgin’s Superstation. These days you can hear him on Smooth Radio.
Working overnights and weekends was Mark Jones, or Joenz as he spelt it at the time so that people would remember him, who’d come from BBC Manchester to City. Later he was on Century Radio as well as Magic 1548 in Liverpool and Magic 1152 in Manchester.
The other presenter of Night Owl was Brian Cullen who had been at BBC Radio Merseyside and would later broadcast on Marcher Sound and Radio Maldwyn (which closed last year).
Sunday evening’s football review show was called a punning Mac ‘n’ Tosh presented by players from the two Mersey teams – John Toshack of Liverpool and Everton’s Duncan McKenzie. Both teams had met earlier that year in the FA Cup semi-final.
Staying on a footie theme on Sunday mornings you could hear Scully. Created by the teacher Alan Bleasdale the programme followed the adventures of tearaway lad Franny Scully whose ambition was to play for Liverpool FC. The character was so successful that Bleasdale took up writing full-time and developed the character in a Play for Today in 1978 and a Granada series shown on Channel 4 in 1984.
Sadly four of City’s 1977 team have passed away. Phil Easton, pictured in the Radio Guide, hosted a nightly rock show. He continued to work at City until the late 80s. Later he was on Orchard FM before joining City Talk. He died suddenly in 2009.
Norman Thomas, “Uncle Norm” or “Little NT” to his listeners, later became a household name in the region. After 15 years on Radio City he moved to BBC Local Radio working at Radio Merseyside and Radio Lancashire. He died earlier this year.
Roger Blyth was running the Mercury press agency when he joined City and which he continued to jointly manage until his death in 1997. After City Roger worked for Granada TV as the news anchor at the Liverpool studios.
Dave Eastwood had started his broadcasting career alongside David Hamilton when they were both doing their National Service. Stationed at Compton Bassett (Jimmy Young had been there for a while during the war) they broadcast to the camp on Compton Forces Network. Hamilton, who had trained as a wireless operator went on to join the British Forces Network in Cologne whilst Eastwood became a Methodist Lay Preacher. But pop music was also his calling and he became a local Merseyside DJ known as “Dave the Rave”. Courtesy of his old mate Diddy David, by now on Radio 1 and a TV announcer, Eastwood started to work for Radio 1 on one of the try-out shows late in 1969 and doing interviews for Radio 1 Club. This led to work at BBC Radio Teesside, Piccadilly Radio and then to City. Later Dave briefly joined Radio Luxembourg before moving to Essex Radio in 1985. He died of leukaemia in 1989.
This is the station information published in January 1978. Note that a certain “K A Dodd” was one of the Directors. 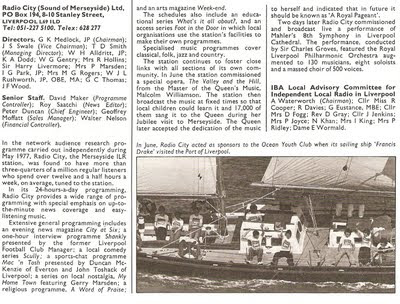