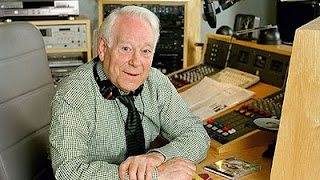 Next month Desmond Carrington celebrates 30 years of his weekly show on Radio 2. Not the same weekly show mind you. From 1981 to 2004 it was the Sunday lunchtime show All Time Greats before he was ‘demoted’ initially to Tuesday evening and then Fridays presenting The Music Goes Round.

Desmond first got in front of the microphone in 1946 on Radio SEAC (South Eastern Asia Command) at its HQ in a palm grove just outside Colombo, Ceylon. His fellow broadcasters were David Jacobs, McDonald Hobley (later one of the first in-vision announcers for the BBC), Charles Chilton (renowned BBC producer who would go on to create Journey Into Space) and Alexander Moyes (who became an actor). Quite a team!

After demobilisation Desmond returned to acting on stage, on film and on the radio. However, he became best known for his performance on ITV’s twice-weekly hospital drama Emergency Ward 10 playing Dr Chris Anderson

Many of his radio appearances in the 50s and 60s were film-related: in the late 50s he presented a Sounds Familiar quiz as part of the Light Programme’s Movie-Go-Round and in 1966-7 he was also on the BBC with Music from the Movies as well as Open House (nothing to do with the Pete Murray series). Desmond broadcast and produced many shows for Radio Luxembourg including Calling the Stars that featured film soundtracks.

Like many broadcasters, actors and musicians Desmond appeared on Housewives' Choice and he was also on the rota of presenters who hosted Roundabout – the drivetime show on the Light and Radio 2 – and Radio 2’s Album Time in 1969 and 1970. 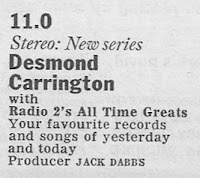 But it wasn’t until October 1981 that Desmond got a regular radio show, although initially it he was contracted for 3 months. In the event All Time Greats ran for nearly 23 years. The show was a mix of modern and classic pop music, show tunes, orchestral pieces and comedy records that worked well in its Sunday Family Favourites slot; indeed the first producer, Jack Dabbs, had worked on that programme back in the late 60s/early 70s.

First of all back to 1984 and this extract from All Time Greats broadcast on Sunday 24 June:


On 29 August 2004 the final All Time Greats was aired. Desmond was obviously not happy about this and neither were his loyal listeners. The following week Elaine Page’s new show started. This is a recording of that final show with Desmond’s emotional sign-off. 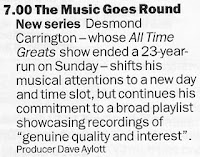 The following Tuesday a new weekly series The Music Goes Round started. By now Desmond’s show was an independent production that he broadcast from his home in Perthshire. Here’s the first half of the initial show from 31 August 2004:

I love Desmond's weekly show and the fact he attempts to incorporate so much material from the decades past to present! I recently discovered he presented a Radio 4 series on Disney Movies the day I was born : http://andysretrospace.blogspot.com/2011/07/those-radio-times-bbc-tv-and-radio.html

Thanks for reminding me about Disney Time. I have a summer 1968 RT with the same series with the Mary Poppisn soundtrack. These film soundtrack shows were regularly on BBC radio until about 1980. The BBC had a unit down at Maida Vale that used to edit them together for broadcast.