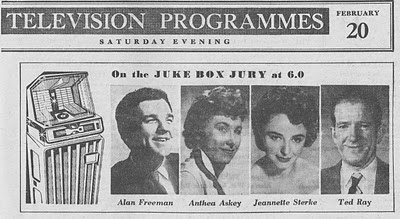 I was listening to Greeting Pop Pickers – The Story of Pick of the Pops that was broadcast last night and it set me thinking as to when was Fluff’s first appearance on the BBC.
Last night’s programme suggested that he’d done various fill-in shows on both the Light Programme and 208. My own research for my Alan Freeman post revealed that he arrived in the UK in 1957 and was working for Radio Luxembourg in 1958 onwards. As far as I could ascertain he presented Housewives’ Choice in 1960 but I have no exact dates. Did he host any other shows on the BBC in 1959 or 1960 before stating Records Around Five on 5 January 1961?
It would appear that Fluff was on BBC television in 1959. According to the Alan Freeman page on the John Peel Wiki site he was on Juke Box Jury in the summer or 1959 with, of course, David Jacobs from whom he would take over Pick of the Pops two years later.
I chanced upon another appearance on Juke Box Jury on 20 February 1960 (see Radio Times illustration above). On this occasion he was on with the panel also consisting of Anthea Askey, actress and daughter of big-hearted Arthur, Czech-born actress Jeanette Sterke and comedian Ted Ray, hardly qualified to comment on the pop records of the day you’d think.
If you have any further information about Fluff’s early radio and TV appearances please contact me.
Posted by Andy Walmsley at 17:50

I wrote the Peel Wiki entry for Fluff. I don't have any Radio Times evidence that he was on Juke Box Jury in 1959, but it has been recounted many times (not least by Fluff himself) that he reviewed Cliff Richard's "Living Doll" on the show and said that it "wouldn't sell a copy", so he must have appeared on one of its earliest editions (JBJ began on 1st June 1959, "Living Doll" charted on 10th July).

The earliest Light Programme show I have noted him presenting is 'Records at Six' in July 1960. The thought of someone who was on the Light back then eventually playing Hithouse and Humanoid on POTP Take 2 in 1988, or Paradise Lost and Porcupine Tree on his Virgin rock show in 1997 ... only Peel & Nightingale in British pop radio history have a range like that.

Thanks Robin for getting back on this so quickly. It seems that those early shifts on Luxy must have made a good impression for the BBC to have taken him on.
The more you hear of Fluff's early shows you realise just how different he was from everything else on the Light Programme at the time and, as you say, an incredible range of music.