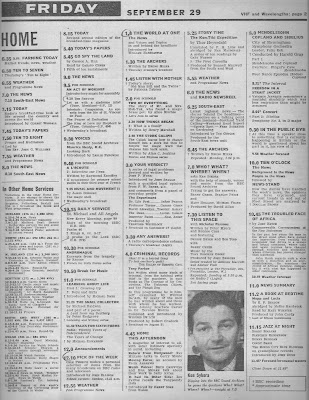 Exactly fifty years ago today BBC announcer David Dunhill bade farewell to the Home Service "for today, and for all days". But he was prescient when he went on to say that the station was "like a bride on the eve of her wedding, we go on being the same person but we'll never again have the same name" for little changed when the Home Service became Radio 4. The same presenters presenting the same programmes at the same time. In this post I recall that final day of the Home Service on 29 September 1967.

Looking at the back issue of the Radio Times there are a smattering of programmes that the Radio 4 listener of today would recognise: Today, the Daily Service, Pick of the Week, The Archers, The World at One, Any Answers? and A Book at Bedtime. But what stands out are the whole chunks of the day given over to schools broadcasts, heard on both VHF and MW, a classical concert in the evening and all the regional variations.

In 1967 Today was still offered up in two editions at 7.15 and 8.15, with the second outing usually a reworking of the first. More often than not the regular presenter was Jack de Manio but this week it was Corbet Woodall, the former BBC television newsreader. A very small part of that Today programme was retained in the BBC archives as Corbet introduces some of the Radio 1 jingles made by Kenny Everett.

On newsreading duty that morning was veteran announcer Alvar Lidell and providing the continuity was Brian Perkins - he'd return to New Zealand a couple of years later but was back at the BBC in 1978.

Three names in the For Schools listings are worth picking out. Anyone listening to BBC languages programmes would have heard of Raymond Escoffey. Over the course of twenty years he wrote and/or produced dozens of  programmes for kids learning French as well as a Russian for Beginners course aimed at adults. In 1985 he co-authored the Penguin French Dictionary. 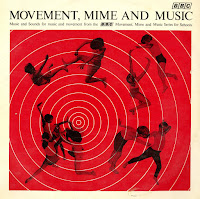 Those of us, myself included, that heard Music and Movement over the school wireless set in the late 1960s will probably have been listening to James Dodding. A drama teacher - who's claim to fame was that he taught David Bowie at the City Literary Institute in the mid-60s - he appeared on BBC radio between 1967 and 1973. He went on to be a drama director and specialised in writing about and teaching mime - he'd studied with Marcel Morceau and Ladislav Fialka.

Michael Smee introduces Learning About Life at 11 am. Michael was one of those general purpose broadcasters that popped up on a number of programmes across all the BBC's television and radio channels, including the World Service.  From 1963 to 1965 he was a co-presenter, alongside Nan Winton, of In Town Today, a Saturday lunchtime version of In Town Tonight. Over the course of about 30 years he narrated and introduced a whole host of schools programmes and further education programmes - including the magazine programme Fresh Start - on the Home Service, Radio 4 and BBC1. There were general reporting duties on Woman's Hour and Movie-Go-Round plus chairing We Beg to Differ - "an open discussion of subjects on which men and women tend to disagree"  and Be Reasonable!, the male reply to Petticoat Line. The only clip I have of Michael Smee dates from the 1978 repeat of Sound by Design that explores "some major developments in the technique of radio".

Sifting through the Pick of the Week just after noon (and just ten minutes of announcements, what where they I wonder? SOS messages, programme news) was Gale Pedrick and John Ellison. The first bit of picking had been in 1959 so the programme is now a couple of years off its 60th anniversary. I don't remember Pick of the Week from this time, I'm more your Margaret Howard era, so I've always understood the Radio Times billing to mean that script writer Gale Pedrick chose the items but you only heard John Ellison on-air actually introducing them. 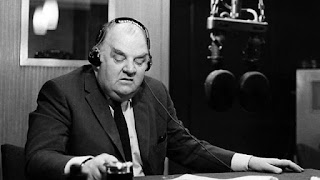 The World at One was still pretty much in its infancy at this point, having started in October 1965, under the control of that old Fleet Street hack William Hardcastle (above). The daytime newsreader was Alexander Moyes whilst Michael de Morgan looked after the continuity.
Note that writing credit for The Archers. Bruno Milna was the nom de plume for Norman Painting aka Phil Archer.

The afternoon fare includes two repeats from the Light Programme with both Your Verdict? and Any Answers? The first of these, devised by John P. Wynn the brains behind Brain of Britain, sounds like a prototype for the later Radio 2 panel game The Law Game. 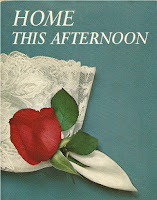 At 4.45 pm it was time to cue in The Clog Dance from La fille mal gardée the theme for Home this Afternoon, a daily fixture on the Home Service and then Radio 4 from 1964 to 1970. Billed as "designed to attract the older listeners" it was a rather twee mix of talks and reports, the serious and the humorous. Ken Sykora was the most regular presenter but Jean Metcalfe, Polly Elwes and Steve Race also featured over the six year run. In the same way that Woman's Hour would come from the regions one day a week, so did Home this Afternoon. On this day it was the turn of Wales with former hill farmer turned broadcaster Harry Soan.

The six o'clock news was read by Bruce Wyndham with Ronald Fletcher the continuity announcer. Bruce must have been on an overnight shift as he popped into the Light Programme studio to chat to David Hamilton during Music Through Midnight, probably after a quick pint or two at the Yorkshire Grey, and the following morning was reading the news on the newly launched Radio 4. Ronald Fletcher would also appear again that evening as he was the regular announcer on Listen to this Space (see below)

Each of the regions had their own news programme after Radio Newsreel (the duration varied by region) but as my edition is for London and the south east it just lists Tim Gudgin with South East. These regional round-ups eventually shrunk down to a 5 minute bulletin before finally being dropped in 1980.

If the daytime output all sounds a little too earnest then the 7 to 8 pm slot offered some light relief. The light-hearted quiz Who? What? Where? When? was chaired by Ken Sykora and included Benny Green on the panel. It only lasted for one series but had a great guest list that would include Flanders and Swann, Jonathan Miller and Alan Bennett. Rather more successful was the topical comedy Listen to this Space. The brain-child of its star Nicholas Parsons it ran for four series and paved the way for Week Ending and The News Huddlines. I wrote about Listen to this Space in 2015 and put together these clips

And the final programme on the Home Service?  Well that was Jazz at Night. Yes, the presenter is the John Dunn, demonstrating just how versatile and busy the announcers were.  The next day John was on newsreading duty, famously starting the 12.30 news during Rosko's show with "Here is the news... in English."


Following Jazz at Night it fell to David Dunhill to read the forecast for coastal waters (the shipping forecast was over on the Light Programme) and say goodnight to listeners to the Home Service. This is how he signed off.
Posted by Andy Walmsley at 10:00