From Birdsong to Bach 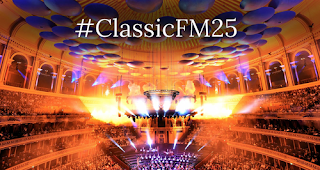 Classic FM has been bringing you "the world's greatest music" for a quarter of a century. It launched on 7 September 1992, the first of the national radio services licensed under the long-awaited 1990 Broadcasting Act. I've been digging through my press cuttings to trace the pre-launch timeline.

The station's journey to air was a long and sometimes difficult one. As early as December 1987 The Independent was reporting that "the Red Rose-Really Useful consortium has outlined plans for a classical music station. David Maker, managing director of Red Rose Radio, claims that Radio 3 is failing to serve its audience".

The 1990 act had also established the new regulatory body of the Radio Authority (RA) and top of its agenda was the new Independent National Radio (INR) licences. In October 1990 it announced that, much to the relief of the existing ILR stations, the sole FM licence would be a "non-pop music service".  The licence was advertised in January 1991 and straight away the Golden Rose consortium, headed by David Astor with David Maker as CEO, was identified as a key player. But actual bids were not forthcoming so the RA extended the deadline. By June they did receive three valid applications: Classic FM, First National Radio with their general show-business themed Showtime proposal and UKFM promising easy listening and light classical music from a group pulling together the resources of Radio Clyde, Lord Hanson, French radio group NRJ, Scottish Television and investment company Trevor Clark.

Behind the scenes there had been some frantic negotiations to pull the Classic FM bid together. Independently Ralph Bernard had been putting together a bid for the licence on behalf of the GWR Group under the name Gem FM; this had followed a successful classic music programme on Brunel Radio devised by Michael Bukht. When it seemed that the Golden Rose group was getting cold feet  Bernard proposed that the two groups join forces and the completed bid was delivered to the RA "with literally minutes to spare".

Showtime bid £1.75m for the eight-year licence compared to £670,000 by Classic FM. It would then have to pay the Radio Authority £980,000 a year and 4% of its advertising to the Treasury. UKFM had the lowest bid at £0.30m. The RA was not particularly happy with the winning bid and its 'songs from the shows' format but nonetheless it was provisionally awarded the licence on 4 July subject to it securing all the funding by 16 August. When Showtime failed to meet the deadline it was offered to Classic FM with the same proviso about proving they had the funds to proceed.

Meanwhile the press was reporting on Classic FM's success. Maggie Brown writing in The Independent 20 August 1991 announced that the Radio Authority "yesterday awarded the coveted FM frequency to Classic FM, the runner-up in the original auction on 4 July. Authority members yesterday unanimously rejected a plea from Showtime Radio for extra time to raise money. Showtime, the original franchise winner and highest bidder, had promised to compete for Radio 2's greying listeners with theme tunes from film scores and musicals. David Maker, chief executive of Classic FM, said yesterday he was 'pleasantly surprised'. He promised a 'superb light classical service with a friendlier style of presentation from Radio 3', and added: 'We will unashamedly ride on the Pavarotti boom.' Mr Maker is aiming for an ambitious 10 per cent weekly share of the national radio audience."

However, the scrabble to secure funds was not straightforward and Golden Rose and GWR were split on how to proceed. Golden Rose were proposing a 'macro' deal with Jazz FM and Buzz FM in the mix whilst GWR managed to gain the backing of Time-Warner, DMGT and, at the eleventh hour, Sir Peter Michael. The financial documents were delivered to the RA on 30 September again with just minutes to spare.

A year ahead of launch Paul Donovan of The Sunday Times was reporting how Classic FM's Chairman David Astor saw the station's position in the market: "It's not correct to portray us as a straight rival to Radio 3. We will be seeking Radio 2  and Radio 4 listeners as well. We want to achieve that essence of Radio 4, which is that you know what you're going to hear whatever time of day you tune in. Our target audience is 25-54, ABC1, with a slight male bias".

Radio 3 controller John Drummond was withering about the new station: "I don't see Classic FM as a rival to Radio 3. They won't be playing on the same ground. They're an alternative music channel and I think there's room for both of us. Certainly there is no question of Radio 3 going downmarket because of the advent of a light classical station. We will not be changing." In the event there were some changes. A year later, under incoming controller Nicholas Kenyon, Radio 3 re-jigged its schedule and launched a glossy classical music monthly, BBC Music Magazine.

A month before the launch Steve Clarke, writing for The Independent quoted Michael Bukht, the station's programme controller. "We will not provide 'Mozartsak' or wall-to-wall Vivaldi. The music will range from Palestrina to Walton. We're going to be playing the pop music of the past 300 years. You're as likely to hear Benjamin Britten at breakfast time as you are Mozart. There will be music full of emotional and intellectual complexity, but only if it has points of accessibility for people who are not specialists. Classic FM will be top quality, but it will not pretend to be elitist or exclusive."

Over the summer of 1992, ahead of the launch, listeners could hear test transmissions consisting of birdsong recorded in the back garden of the station's chief engineer Quentin Howard. Amazingly it became something of a broadcasting sensation and years later led to Radio Birdsong occupying a vacant slot on the Digital One network. Earlier this year Quentin spoke to Paddy O'Connell about the recording.

Classic FM's launch day was set as Monday 7 September 1992 broadcasting from studios in rented space at Academic House on Oval Road in Camden. The previous day Paul Donovan wrote about "the new chapter in British broadcasting" and how the new arrival was "keen to dispel sneers that it will be wall-to-wall Vivaldi". £12 million had been invested and 11 new transmitters imported from the US to reach 80% of the population. The prospects for the station augured well: "Classic is launching at a time when interest in, if not knowledge of, classical music has reached phenomenal levels. One in every five CDs sold is now classical. Fine music, particularly opera, has become aspirational, like fine wine or foreign travel."

At 5.58 am the birdsong faded out and in came David Arnold's nine-note logo main theme. At 6.00 am the first voice on air is actually that of newsreader Sarah Sheppard but the station's first breakfast show presenter, Nick Bailey, cues in the first record, Handel's coronation anthem Zadok the Priest, some six minutes later: "Good morning and welcome to Britain's first national commercial radio station. This is Classic FM. I'm Nick Bailey and this is George Frederick Handel." For the record the first advert is for Barclays Bank voiced by Peter Barkworth and Peter Jones.


Nick Bailey was, until he left last month, the only remaining presenter from the launch line-up. He returns this Thursday to read the news. From later on the first day of broadcasting here's Susannah Simons.


This is how the launch schedule looked:

Classic FM's launch was an unqualified success, despite the odd gaffe (see below). Paul Donovan wrote how "its presentation is characterised by the bounce and zap, and superficiality, of commercial radio stations. It is much less considered and high-minded, and much more informal and chatty, then Radio 3. It is a very different approach indeed, and Britain has never heard anything like it before. In aquatic terms, Classic is like a bath, a soft, warm wallow, while Radio 3 is more of a shower- astringent and stimulating". There were some irritations however; "Bach's double violin concerto followed by a snappy update on M4 contra-flows is exactly what is meant by the words sublime to the ridiculous."

The station did tend to polarise opinion; it was either a great democratiser of classical music or it made classical music a disposable commodity. The Independent asked some not exactly typical listeners about what they'd heard. James Jolly editor of Gramophone liked the "strange sort of classlessness that's relaxing, there's something very direct about it." Pianist Peter Donohoe welcomed more exposure to classical music but added that "it is not being faithful to that art to let people just hear the nice bits only". Antony Hopkins, conductor and long-time BBC broadcaster decried the "mismash of music" adding that "the general assumption seemed to be that nobody could tolerate listening to anything for longer than five minutes." Composer and conductor Odaline de la Martinez thought "It's all very popular classical music; there's nothing wrong with that, but sometime you need meat, not just sugar." Composer Judith Weir started off with an open mind but was disappointed.

For the wider listenership Classic FM hit the ground running and within 3 months was reporting figures of 4.5 million and a 9 to 10% audience share - making it the fourth most popular station after Radios 1, 2 and 4. Today it pulls in about 5.8 million listeners, around a 3.9% market share.

Radio 3's listening figures did take an initial dip but controller Nicholas Kenyon was undismayed. "Classic FM set out to be popular and it is not playing anything that anyone doesn't like. It has to deliver an audience to advertisers, while we are extending choice by the breadth of our repertory." And the money did roll in. In January 1993 Guy Lamming, media analyst, was quoted as saying "it is vital that the first national radio station funded by advertising does succeed. It needs £7m in advertising revenue in its first year and it looks as though it will pass that easily and become a significant profit-generator".

By the time its celebrated its second anniversary Classic FM had moved into profit for the first time, had 4.7m listeners, was extending the brand into Europe with an FM licence in the Netherlands, had a £2.2m educational sponsorship with Nestlé and had sparked a trend for CDs offering "essential" classics.

The story of the launch of Classic FM  is told this Tuesday at 8 pm in The Pazza Factor, a music-based play written by Sean Grundy and Cara Jennings starring Jon Culshaw, Duncan Wisbey and Kate O'Sullivan. It is still available to listen again on the Classic FM website.


Reference: Sounds of Your Life by Tony Stoller (John Libbey Publishing, 2010)
Posted by Andy Walmsley at 09:00

I remember discovering the birdsong as a teenager and was hooked. My mum tuned into Classic FM on day one, from BBC Radio Scotland, and has never tuned out. We both used to love Quentin Howard on a Saturday night in the early days with 'Six of the best'. Still listen now, but thanks for an interesting blog post that's prompted many memories.