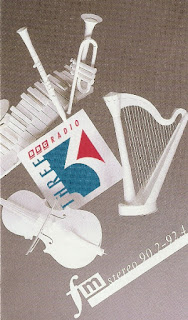 When the Third Network - the umbrella title for the Music Programme, the Third Programme, the Sports Service and the Study Session - became Radio 3 on 30 September 1967, listeners won't have noticed any difference. It was very much business as usual. All the component parts retained their own names, controllership of the Third remained under Howard Newby and the Music Programme continued to be the responsibility of the Controller of the Home Service, which became Radio 4 of course, Gerard Mansell.

Here's the final Saturday schedule for the Third Network for 23 September 1967, the start of the 21st anniversary week for the Third Programme. 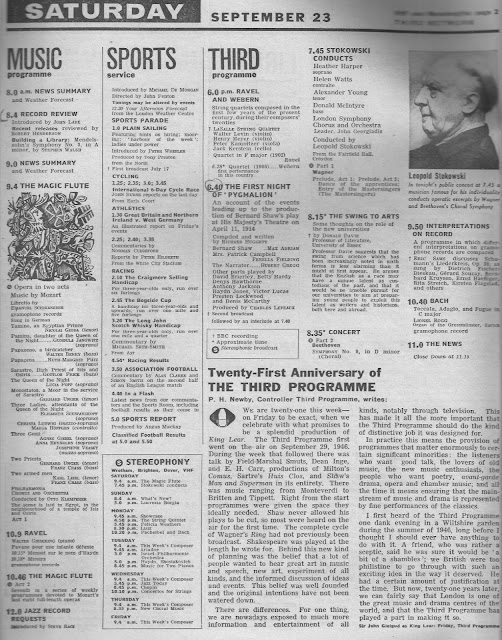 And here's the Radio Times listings a week later under the Radio 3 banner for 30 September 1967. 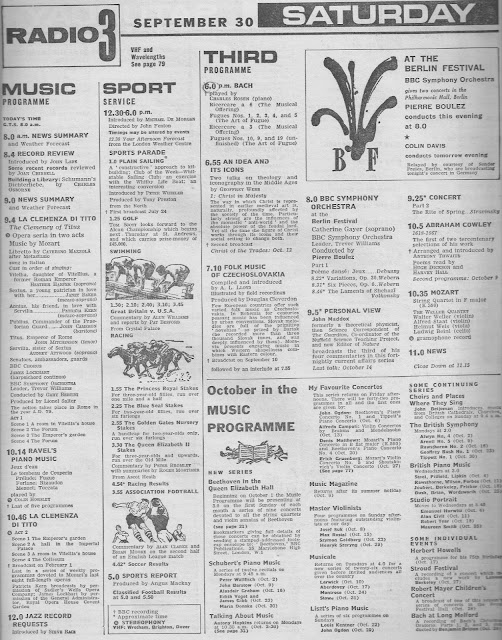 Daytime on the Third Network was given over to the Music Programme that had been introduced in August 1964; prior to that the channel was mostly silent during the day. About 99% of the daytime music was classical, but during the week there was the odd programme devoted to light music, brass bands and jazz. On weekdays the service ran from 7.00 am to 6.30 pm with an hour's Study Session acting as a buffer before the evening's listening on the Third Programme.

You'll no doubt spot a couple of programmes that still crop up on Radio 3's Saturday schedule. Jazz Record Requests dates from 1964 when Humphrey Lyttelton was the first presenter, from April 1967 Steve Race took over the role. The other is Record Review which had first appeared back in 1957.

Occupying the afternoon slot between 12.30 pm and 6.00 pm was the Sports Service. This had originally started as a summer fixture in 1961 but became an all year programme from, yes you've guessed it 1964. It incorporated Sports Report that had started out on the Light Programme. Note that the presenter for both afternoons is staff announcer Michael de Morgan. This is typical of that period; sports journalists didn't really take over the role until Peter Jones joined the team in 1968.

The evening was given over to the Third Programme offering its mix of classical music, drama and talks. For the opening night under the new network the prime offering was a concert from the Berlin Festival featuring the BBC Symphony Orchestra conducted by Pierre Boulez.

The network didn't fully shift over to its new name for another two and a half years when the policies of the internal review Broadcasting in the Seventies were formally adopted. By 1969 an internal working party had already concluded: "We recommend dropping the names 'Third Programme' and 'Music Programme' and uniting the whole network and programme service under the single title 'Radio 3'. The Third Programme in particular has made a great name for itself and the loss of this title will be depreciated by some but it undoubtedly has connotations which discourage a large number who might have enjoyed many of its programmes from tuning into it. A new title will help to emphasise that we are making changes and that we intend to be free from  past commitments".

D-Day for the first phase of the network realignment was Saturday 4 April 1970. Here's the Radio 3 line-up, and it's now music all the way from 8.00 am to 11.30 pm with three evening talks, one on Bertrand Russell, the second from economics historian Robert Skidelsky and the third on Frank Lloyd Wright.  There's no drama, that's over on Radio 4's Saturday Night Theatre, but on Sunday there's Marva from Russian playwright Isaac Babel with a cast that includes Paul Eddington and Fenella Fielding. As for the sport that had now shifted over to Radio 2 as Sport on 2.