Radio 3 enjoyed a classical music monopoly for the first quarter of a century of its existence until the arrival of Classic FM in 1992.

You could, of course, hear drama and talks over on Radio 4. Radio 3 even covered current affairs on programmes such as Six Continents (1979-87). There was a smattering of classical music elsewhere on the dial on Radio 2 and Radio 4 on These You Have Loved, Baker's Dozen and Melodies for You. Even some of the new ILR stations got in on the act - Capital sponsored the Wren Orchestra of London - but it amounted to no more than an hour or so a week. So when Classic FM came along Radio 3 had to up is game.

Ahead of Classic FM's September 1992 launch, in June the BBC announced 'BBC Radio 3 FM's New Look' with controller Nicholas Kenyon explaining he wanted to create "access points" for new listeners, whatever that meant. They appointed Saatchi and Saatchi as advertising agents and in the Autumn launched the glossy BBC Music Magazine.

The morning sequence of records linked by a staff announcer, Morning Concert, was dropped in favour of On Air, while the teatime Mainly for Pleasure would become In Tune. The BBC described the new programmes as "two weekday programmes with named presenters, of mostly popular classical music with new headlines, weather, traffic information, previews, news of the music world". The main loss for listeners was a reduction in drama on the station. "Music Plus" was the strapline, but one critic described this as a euphemism for "Drama Less".

This is how On Air sounded when its first edition was heard on the morning of Monday 13 July 1992. Piers Burton-Page, a music presenter and producer and previously a continuity announcer and newsreader on both Radio 3 and Radio 4.


Those news headlines that Piers reads every 20 minutes were an unwelcome addition with Kenyon later admitting "our presenters talked too much" Adding "I now tell them to be economical with words. I also accept that perhaps we went slightly too far and threw out too many well-known programme labels."


In 1993 the BBC produced this glossy 24-page booklet promoting Radio 3's wares. The quote on the back cover from composer Harrison Birtwistle hints that this was the BBC firing its big guns at Classic FM: "Radio 3 is in danger of becoming the last refuge of the serious music-lover. In times when concert programmes show a remarkable similarity, and classical music through the popular media is reduced to a mere cosmetic continuum to our lives, its excellence is increasingly more important". 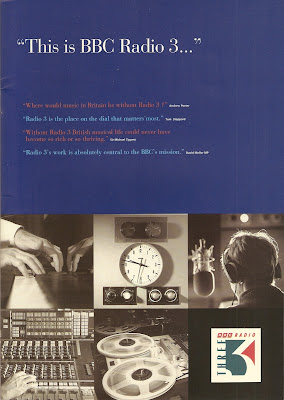 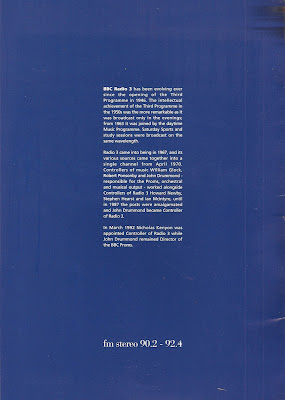 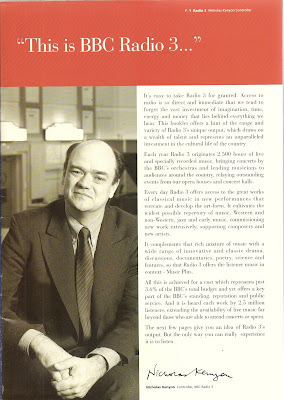 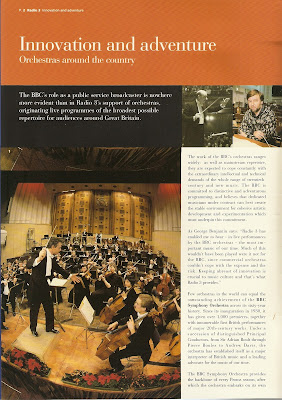 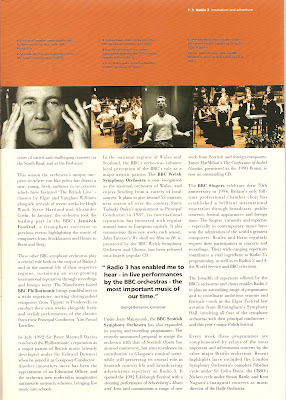 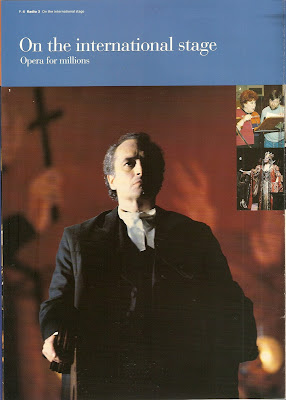 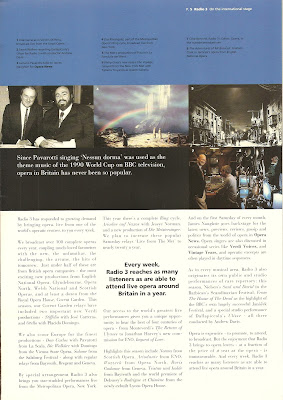 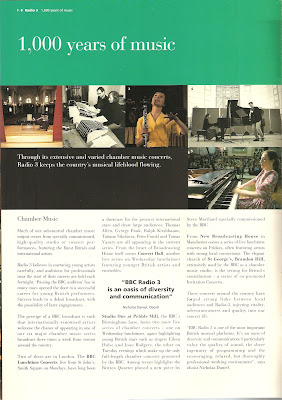 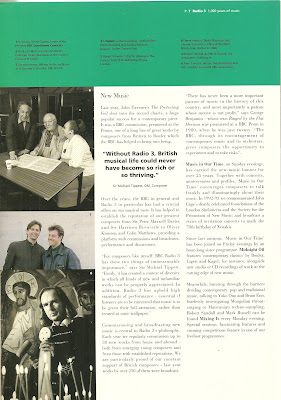 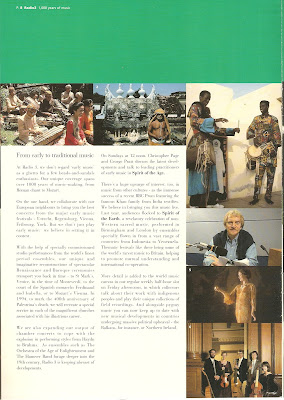 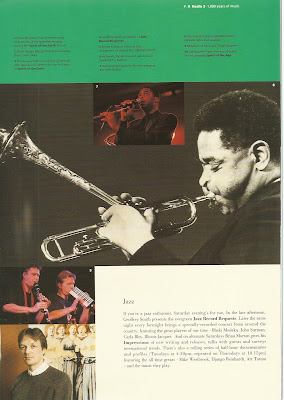 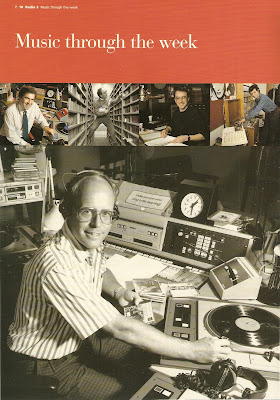 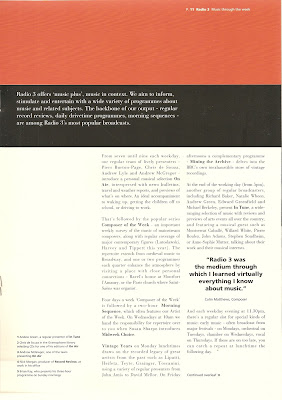 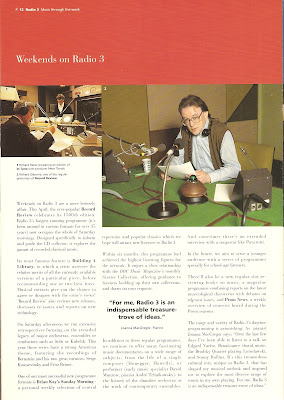 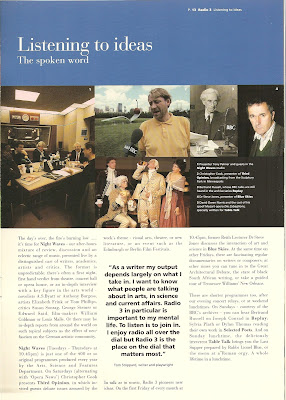 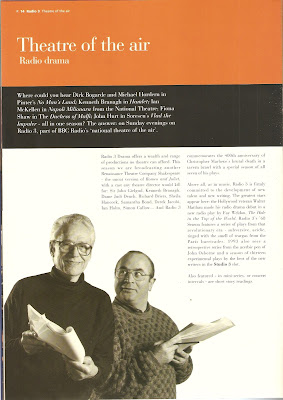 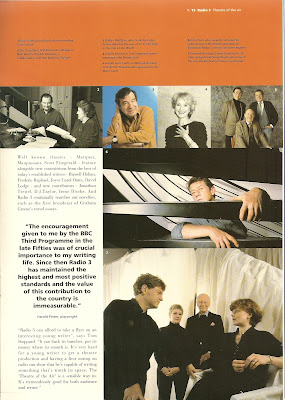 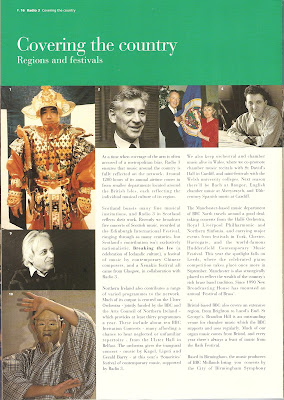 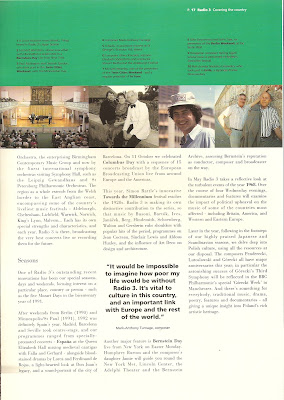 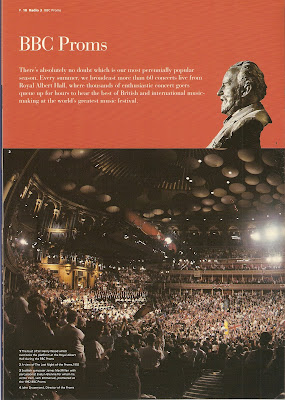 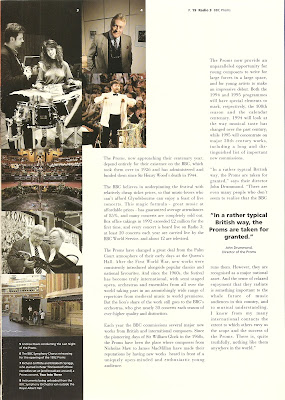 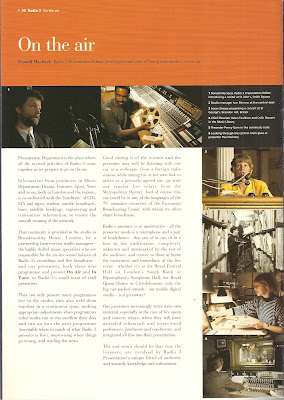 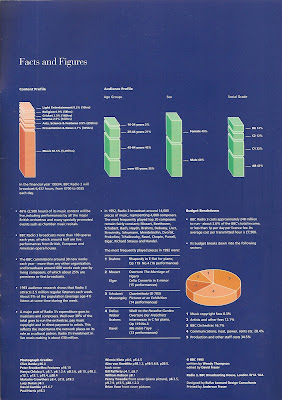 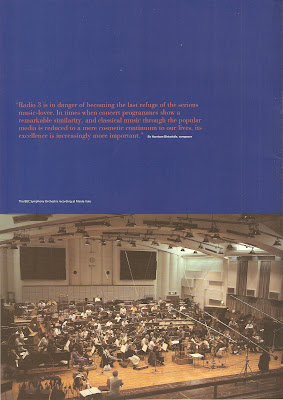