September 1992 and marking a quarter of a century on air Radio 1 faces the end of an era - though little did we know it at the time. A year later DLT had gone. So had Bates, Bob Harris and Fluff. Beerling was out. Bannister was in. Still, the station was in celebratory mood and it would be the last time it would widely acknowledge its heritage until its 40th some 15 years later.

So how did Radio 1 sound on its 25th birthday on 30 September 1992? Fortunately I recorded some chunks of that day's broadcasts.

The main event was The Birthday Train, yet another excuse to get Simon Bates out of the studio. In this case it was on a train making its way from Edinburgh to London where it was to be officially named by Catherine Zeta Jones no less as 'BBC Radio 1FM'.

Musically it's not a typical day - Cliff Richard and Sandie Shaw are amongst the artists on Bruno Brookes' playlist. From this week Radio 1 was renamed 1FM - a short-lived affectation - and there was the new Closer to the Music jingle package. 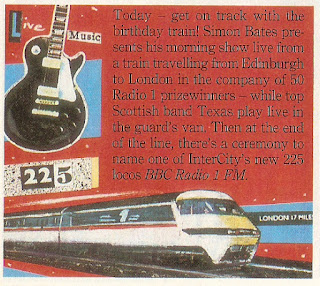 In this first sequence its Bruno and then Simon Mayo with the Breakfast Crew (Diane Oxberry and Rod McKenzie) with occasional link-ups with Bates. The its over to Simes on the train for part of The Golden Hour. (Does anyone have a copy of Vince Clarke's version of Theme One?) The 1FM Express was 45 minutes late into King's Cross - apparently a careless JCB driver cut through a signalling cable - so Jakki Brambles is late on air broadcasting from the Roof Gardens in Kensington. With Jakki is station controller Johnny Beerling, Tony Hadley, Midge Ure, Smiley Miley, Neil Arthur (ex-Blancmange) and Boy George. (All credit to Peter Powell as Tony, Neil and Boy George all mention him playing their records and encouraging them). 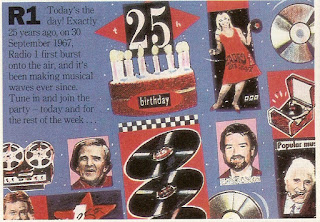 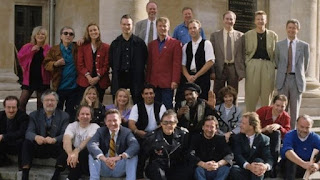 In the third and final sequence from 30 September 1992 its Mark Goodier, first with Mega Hits, "the Top 10 you choose every day" and then after News 92 in comes the Evening Session. The Session includes current chart acts covering some of the biggest number ones of the last 25 years: The Wonder Stuff's version of Slade's Coz I Love You, Kingmaker's Lady Madonna, Blur's Maggie May, Boy George's My Sweet Lord, The Frank and Walters cover of I'm a Believer and, bizarely, Ned's Atomic Dustbin with Charlene's I've Never Been to Me. There's also The Mission with their version of Atomic, Billy Bragg with When Will I See You Again?, Carter USM's cover of Another Brick in the Wall, The Farm with Don't You Want Me? and Manic Street Preachers with Suicide is Painless. All these tracks were later released on the NME album Ruby Trax.


For whatever reason I didn't record the Man Ezeke so we move onto "the man with musical plan" Nicholas Andrew Argyle Campbell. Nicky plays a selection of number hit singles and album tracks from 1967 onwards - my recording ends in 1977 with Way Down. Finally, to round off the day part of Bob Harris's classy overnight show.