The Custodian of Our Network

As successive controllers of BBC Radio 4 can testify, when tinkering with the programme schedule you do so at your own peril. It's almost as if the schedule has been passed down on tablets of stone from John Reith himself. As a listener once wrote to former network controller Michael Green: "You are simply the custodian of our network."

Tony Whitby (controller 1969 until his untimely death in 1975) was tasked with re-shaping the network in response to the Broadcasting in the Seventies policy. The schedule inherited from the Home Service was a bit of a dog's dinner: cross-network repeats (with both Radio 2 and Radio 3), schools programmes blocking out huge chunks of the mid-morning and mid-afternoon in term-time, music programmes and concerts (in 1968 these accounted for 21% of Radio 4's output), talks, bits of sports coverage and loads of regional variations. From April 1970 news and current affairs was to be the backbone of the revised Radio 4 schedule. The far-reaching Broadcasting in the Seventies policy naturally enough caused a public outcry, letters to The Times, questions in Parliament and union unrest within the BBC. But the result, at least as far as Radio 4 was concerned, provided a number of significant and long-lasting programmes: Start the Week, Week Ending, PM and Analysis. During Whitby's tenure we also got You and Yours, Sunday, It's Your Line, Stop the Week, Kaleidoscope, Checkpoint and I'm Sorry I Haven't a Clue.

Ian McIntyre (controller 1976-78) wasn't happy with the way current affairs was serving Radio 4 so in May 1977 he took an axe to it, chopping Today in two and, later that same year, hacking 15 minutes off PM thus earning himself the sobriquet 'Mac the Knife'. Today was now prefaced and separated by two sequences called Up to the Hour that offered the news headlines, sport, weather, paper reviews and Thought for the Day mixed with programme previews plus bits of comedy and music all linked by a staff announcer. The Today production team were unimpressed, "absolute crap, the floor-sweepings" according to editor Mike Chaney, who didn't mince his words. The announcers were not happy, with Peter Donaldson earning a slap on the wrists for introducing one edition as 'Donald Peterson' sending you "round the dial to Radio 3" and "if you're staying, you're very brave, and welcome to Up to the Hour". The full-length Today was re-instated in July 1978.

Steeped in BBC history as he was, David Hatch (controller 1983-86) a former radio producer, Head of Light Entertainment and Controller of Radio 2, felt he had to tackle the problem zone of the mid-morning dip, i.e. between Today and You and Yours, when listening figures fell off. In April 1984 he introduced, for just one morning a week, Rollercoaster, a programme sequence linked by that safe pair of hands, Richard Baker, and built up of programme fragments such as news, chat, topical phone-ins, traffic reports, features, a cut-down Daily Service, a Morning Story read by Peter Adamson, a radio strip-cartoon called Able Seagull Herring and link-ups with local radio stations. This looser style of scheduling actually pulled in respectable audience figures but was a critical failure and after the six-month experiment it was pulled, never to be repeated.

When James Boyle was appointed controller in 1997 he was determined to avoid the station becoming a "museum piece" and sought a root and branch review of the programme schedule. He took a more scientific approach by travelling around the country speaking to listeners and by analysing every bit of data he could lay his hands on about listeners habits. A laudable approach but one that was criticised as putting Radio 4 in thrall of "ratings or computer-driven commissioning, more interested in form than in content, neglectful of intuition or serendipity." 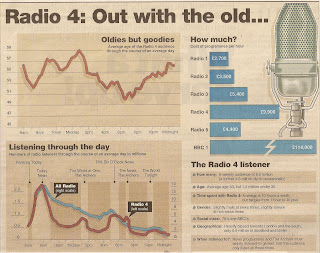 When the broadsheets got wind of Boyle's "strategic scheduling" they whipped up a storm. "Favourites face axe in revamp of Radio 4." MPs got involved when it was floated that Yesterday in Parliament was to be dropped - it wasn't.

Boyle's revamped schedule was introduced in April 1998. Out went Kaleidoscope (replaced by Front Row), Week Ending, The Afternoon Shift, Science Now, Medicine Now, Sport on 4, Mediumwave, Breakaway and Does He Take Sugar? Today and You and Yours were extended, Woman's Hour and The Archers retimed but with an extra visit to Ambridge added on Sunday evening. The World at One was docked by 10 minutes and a series of daily lunchtime quizzes introduced, some old (Round Britain Quiz) some new (Full Orchestra). The afternoon dramas, a mixture of new plays and in-week repeats of varying running times, were tidied up. It was a shock to the system and one which the listeners - and Radio 4 listeners love their routine - found hard to take as initially audience figures dipped with Boyle admitting they were "very disappointing".

The 1998 changes at Radio 4 are the subject of this BBC2 documentary from the Close-Up series. A more typical bunch of middle-class listeners you couldn't hope to find: a PR agent, a retired civil servant, an Open University lecturer and an office administrator plus the musings of Daily Telegraph radio critic Gillian Reynolds. James Boyle talks about the schedule shake-up to Feedback's Chris Dunkley. Added to this are some fascinating glimpses behind the scenes at Broadcasting House and look out for an in-vision appearance from chief announcer Peter Donaldson.

Close-Up: Radio Heads was first broadcast on BBC2 on 14 October 1998. Incidentally does anyone know what happened to Douglas Bolger and his tape collection?

As any gardener will tell up a good hard pruning will rejuvenate a plant and so it was with 1998 changes. Listening figures eventually bounced back and although some of the new shows did inevitably fall by the wayside the legacy included Home Truths, Broadcasting House, Saturday Review  and The Archive Hour and most of the timeslots remain pretty much unchanged to this day. 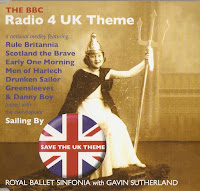 I can't leave the subject without mentioning the furore surrounding the decision of Mark Damazer (controller 2004-2010) to drop the UK Theme. Cue letters from irate listeners, a national petition and an early Day Motion "that this House deplores the decision by the BBC to axe the UK Theme which signals the switchover from the World Service to Radio 4 and symbolises the unity of the UK; and calls on the BBC to reinstate it." After 28 years it got its last play on 23 April 2006. I have a forlorn hope that Radio 4 will give it one last airing on the occasion of their 50th birthday. Heaven help the controller that drops Sailing By.