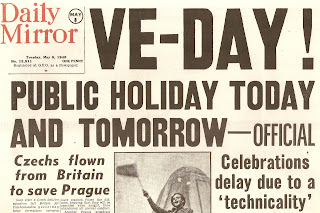 The official announcement of the end of hostilities in Europe came at 3 p.m. British Double Summer Time on Tuesday 8th May 1945. The country had been holding its breath for the announcement for nearly a week as the news of Hitler's suicide (1st), the German surrender in Italy and the fall of Berlin (2nd) and the surrender of troops in Denmark (4th) all filtered through. John Snagge had presented the final edition of War Report on the 5th.

By Monday 7th May news came from a German radio station at Flensburg near the Danish border of a broadcast by Foreign Minister Count Schwerin von Krosigk that the new Fuehrer Grand Admiral Doenitz had declared an unconditional surrender. In Britain this led to "a good deal of confusion, premature rejoicing and mystification" (Daily Sketch).   The Government had agreed to a delay in the formal declaration until a time that suited both the Russians and the Americans. At 6 p.m. the BBC broadcast that Churchill wouldn't be heard that day. Just over an hour and a half later came the news that the following day the Prime Minister would be speak in the afternoon and that it would officially be Victory in Europe Day. VE Day, and the day after, would be a public holiday and, just to top it all, the pubs would be allowed to stay open until midnight.

The BBC put into place one of seven different advance schedules they'd drawn up for ten days of victory celebrations. There were special victory editions of some of the most popular shows at the time such as ITMA (V-ITMA for the occasion), The Will Hay Programme (Victory at St Michaels), the variety show Cap and Bells, In Town Tonight, Music Hall, Monday Night at Eight and a series "dedicated to those who made possible this great victory" called Their Finest Hour. The full Home Service schedule for VE Day can be found on the History of the BBC website.

Writing in his diary BBC announcer Stuart Hibberd remembers how his VE-Day at Broadcasting House panned out:

I was up betimes and broadcasting before breakfast, and later came a busy period in the office of conferences, checking cues and schedules, inserting this and leaving out that, and at all time I was answering for John Snagge while he rehearsed 'Tribute to the King' and Victory Report.

Snagge announced the Prime Minister at three o'clock, I read the six o'clock News - twenty-five minutes of it - with the Prime Minister's recorded speech. The 'Tribute to the King' went excellently. His Majesty spoke very well indeed, but took thirteen and a half minutes, so that. with the National Anthem, played by the Symphony Orchestra in Bedford, it was almost 9.15 p.m. before I began the News.

After dark, we went out to see the flags and floodlighting. There were hundreds of flags, but only a few flood-lit buildings. It was a most impressive scene, with crowds everywhere in the streets and on the pavements. I returned to read the midnight News, which included the King's speech, the first sentence of which I can never forget: "As these words are being spoken, the official end of the war in Europe is taking place..."

And with a feeling of great relief and deep thankfulness for having lived to see the end of a Second World War, I went to bed, and to sleep at once.  (from This is London) 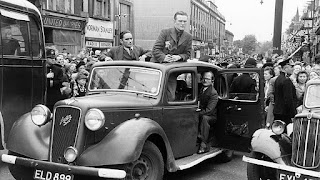 Forty years later former BBC war correspondent Stewart MacPherson (pictured above) presented this programme featuring memories of VE Day. In The Way We Were we hear actuality recordings including eyewitness reports from MacPherson himself. There are fascinating insights from those who lived through that day or played a part behind the scenes including Susan Hibbert who helped type up the surrender documents, Churchill's Private Secretary John Peck, RAF pilot Raymond Baxter, a Wiltshire school girl and a Bevin boy, POW Jack Fraser, Corporal Tom Thorpe and BBC reporters Wynford Vaughan-Thomas and Godfrey Talbot.

But the real coup for this programme was the interview with HM The Queen who, with her sister Margaret, went out onto the streets of London on VE Day on what she calls "one of the most memorable nights of my life". The young Princess had registered for National Service on her 16th birthday and had been commissioned in the Auxiliary Territorial Services.

The Way We Were was broadcast on BBC Radio 4 on Wednesday 8 May 1985. It was produced by Caroline Elliott. I've made some minor music edits to this recording.


This is the last in a series of four blog posts marking the 75th anniversary of VE day.