VE75: From Mind My Bike to Evening All 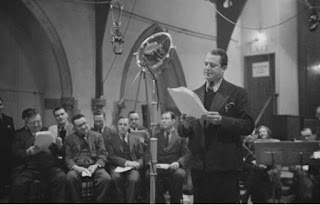 Although best known as the reliable bobby PC George Dixon, Jack Warner was one of the radio stars of World War II in the hugely popular Garrison Theatre.

Born Jack Waters (his sisters were the equally popular Elsie and Doris Waters aka Gert and Daisy) his early career was as a motor mechanic and as test driver at Brooklands. Coming from a showbiz family he became a  professional in the mid-30s partnering up with pianist Jeff Darnell as a comical version of the Western Brothers. He also teamed up with pianist Bobby Alderson who was to accompany Warner on his musical comedy routines for the rest of his life. The pair made a number of pre-war broadcasts on both BBC radio and the nascent television service.

In late 1939 Warner was approached by BBC Variety Orchestra conductor Charles Shadwell to appear in a show he was putting together with producer Harry S. Pepper. That show was Garrison Theatre in which he played the role of a cockney private. Like that other wartime comedy ITMA, its catchphrases became common parlance: 'Mind my bike!', 'de-da-de-da' and 'little gel' (played by Shadwell's daughter Joan Winters). He would also read aloud letters to 'my bruvver Sid' which became famous for their 'P.S.' gags and the use of the term 'blue pencil' were swear words might have appeared which had the audience in stitches. "Yesterday the colonel caught his thumb in a tank. His only remark was twenty-four blue pencils" 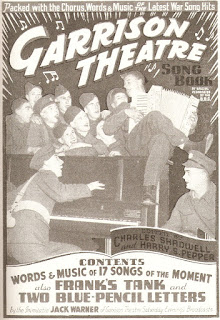 Warner also wrote dozens of comic monologues and songs that he continued to perform for many years like He Didn't Orter-a-Et It, Sealions and Sills, Claude and his Sword, Frank and his Tank and Walkin' Hup and Dahn the Rollway Lines. One of the best remembered is the Funny Occupations song with its tongue-twisting references to a bunger-up o' rat-'oles, a fumper and flattener of fevvers and a caster-up of alabaster plaster.

Although Garrison Theatre only ran for a year Warner was now a star name. He continued to appear in his comedy persona in Saturday Social, Jack's Dive, Music-Hall and Variety Bandbox. After the war he took up film acting in both comedy and serious roles with The Captive Heart (1946) being his first feature film. An appearance as Joe Huggett in Holiday Camp (1947) and three sequels led to a return to radio in 1953 to reprise the role in the cosy family sitcom Meet the Huggetts. Warner co-starred with film wife Ethel Huggett played by Kathleen Harrison. The series ran until 1961.

Meanwhile the role in the Ealing film The Blue Lamp as PC George Dixon and the character's resurrection in the BBC series Dixon of Dock Green (1955-76) meant that Jack would be forever remembered as "an ordinary copper who's patrolling his beat, around Dock Green".

In 1978 as part of the Radio 2 series It's a Funny Business, comedy writer and producer Mike Craig talked to Jack Warner about his career. It's not had a repeat since 1990 so here's your chance to hear it again.


This is the first in a series of four blog posts marking the 75th anniversary of VE day.