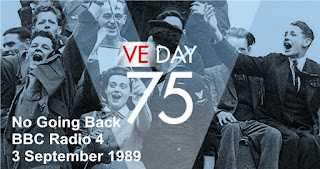 In this post I'm replaying the 1989 feature No Going Back in which former war correspondent Frank Gillard looks at the changes in British society brought about by the Second World War.

He says: "I see World War II as the great watershed of  my own life and a very considerable watershed in British social history. Every echo of 1945 delivers the same message: it wants to be a people's peace, a time for change, a time for communality and universality. Time for more mutual concern and fairer shares. A message arising sometimes out of reasoned argument, sometimes in heated  debate, sometimes in threatening challenge".

The programme looks at some of the major themes in post-war society: the rebuilding of  the economy, housing shortages, the Welfare State, the burgeoning interest in the arts, increased opportunities for secondary and higher education, an appetite for news and current affairs, the mechanisation of agriculture, the start of a new scientific age and the changing role of women. 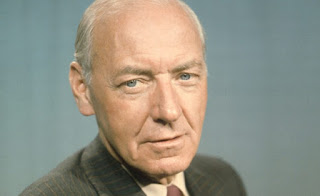 Gillard (pictured above) concludes "our society emerged from the conflict of war more considerate, more decent and more generous. The quality of life was greatly heightened. There was no going back to those bad old days. There was a new spirit abroad in the land after this war, and in my book that spirit still persists to a greater degree than many recognise who've no personal memories of pre-war Britain. The war was not fought in vain".

This is the third in a series of four blog posts marking the 75th anniversary of VE day.