We Stop for PopMaster 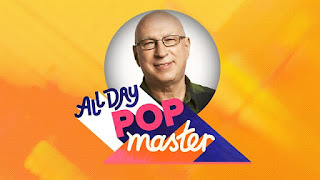 Today Ken Bruce is hosting an All Day PopMaster contest with DJs from the BBC and commercial radio taking part.

PopMaster was first featured on Ken's mid-morning show in 1998, although 1996 is quoted in the quiz book. Two years out! (Oh, how I wanted to type one year out). The idea for the quiz had been suggested by Ken's producer Colin Martin and they enlisted Phil 'The Collector' Swern to compile the questions.

I've managed to find an example from 2004 where the format was slightly different from the current set-up. Part1 occurred at 10.30 but contestant number two didn't appear until 11.15 and then after another record the Three in Ten. See how you get on with these questions from 30 January 2004. They certainly seem easier than the current question level.

All Day PopMaster starts during the Radio 2 breakfast show with Dermot O'Leary sitting in for Zoe and the final during Sara Cox's drivetime show.