VE75: How Radio Won the War 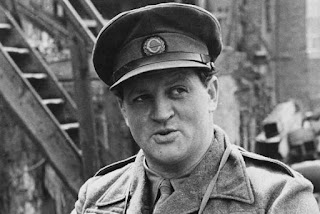 In early September 1939 a saloon car fitted up with recording equipment was loaded onto a cross-Channel steamer at Dover. It was driven down to Paris where it was hidden in an underground garage.  Just for weeks later the BBC's young news reporter Richard Dimbleby arrived in the capital to pick up the car. This was the start of frontline war reporting for which the Corporation would be justifiably commended.

In the event during this Phoney War period Dimbleby became bored with what he saw as a lack of action and asked to be reassigned to the Middle East. It fell to his colleague Charles Gardner to witness the air battles over France in the summer of 1940. 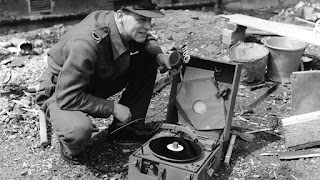 Despite some memorable reports from the front-line the BBC was frustrated with the access it was being given in preference to newspaper reporters; whilst at the same time there were internal frustrations within the BBC that it had failed to build up a corps of war correspondents. The turning point came in the Spring of 1943 with the invasion of Oxfordshire. In fact it was a six day mock invasion in an exercise code-named Spartan. The BBC was allowed to cover it with "a view to persuading the services that radio reporters could play a valuable role on the battlefield". To overcome censorship issues correspondents developed a style that evoked the atmosphere of the front-line, providing the colour and human interest without the detail that would worry the censor such as locations and troop numbers. The recorded despatches (which were never of course broadcast) helped convince Sir Bernard Paget, commander-in-chief of Home Forces to allow the BBC greater access. This allowed producers to finalise their plans for the establishment of the War Reporting Unit which would go on to be so crucial in the nightly War Report programmes that started after D-Day in 1944.

In this programme, the fourth in the series How Radio Won the War titled At Last, Something to Cheer About looks at how the BBC's war reporting changed in the final phases of the war. Narrated by Robert Powell it includes contributions from the always interesting Frank Gillard and Sir Bernard Ingham, who, you won't be surprised to hear, mentions Thatcher and the Falklands.

How Radio Won the War was first broadcast on BBC Radio 5 live on 9 July 1995.

This is the second in a series of four blog posts marking the 75th anniversary of VE day.