Fun at One – Radio in a Blender 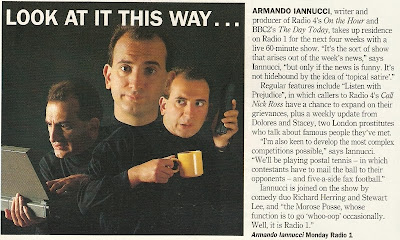 By a strange coincidence ‘Iannucci old’ and ‘Iannucci new’ are on offer this week. Sky Atlantic have series two of HBO’s Veep whilst BBC Radio 4 Extra start re-runs (from tonight) of Armando Iannucci’s eponymously titled second comedy series for Radio 1.


By 1994 Armando had already worked on Week Ending, On the Hour and Knowing Me, Knowing You and appeared in front of the microphone in the 5-part series for Radio 4, Down Your Ear. He was given a try out on Radio 1 with a couple of 30-minute shows in 1993. These shows demonstrated his witty and knowing style. It was the comedy of parody and the piss-take, poking fun at the grammar of radio with the irony meter set to red. It was radio “put through the blender and re-stitched together the wrong way round.”
The 1993 series has also just had a repeat outing on Radio 4 Extra. If you missed them, here’s some of what you could have heard.
 


In fact both programmes, plus series two, can be found on the Fist of Fun website, just look under Downloads.
Posted by Andy Walmsley at 10:30